This is one type of robot is controlled by a cell phone, conventionally wireless controlled robot using RF circuit. The RF circuits which have the drawbacks limited frequency range, limited working range, limited control and cannot use at remote areas. The mobile phone robotic control can overcome these limitations .It provides the robust control, large working range and easy to use at everywhere.

The main objective of this project is to build a mobile phone link between a transmitter and an unintelligent robot. This provide the feature to operate the robot from remote locations. In this Wireless controlled robot two mobile is used, one mobile is used as a remote control and another is used as a receiver which is attached to the robot through hands free. When we makes a call from the mobile which is at remote location, then the mobile at the receiver side connect the circuit. When the circuit have connected then press any button of remote location side mobile, the same tone we can hear to the receiver side mobile. This tone is called Dual Tone Multiple Frequency (DTMF) .Dual tone multiple frequency mean when we press any button at that time two frequencies are generated one is low frequency and other is high frequency. In this project we used DTMF decoder, Microcontroller and motor drive integrated circuit. 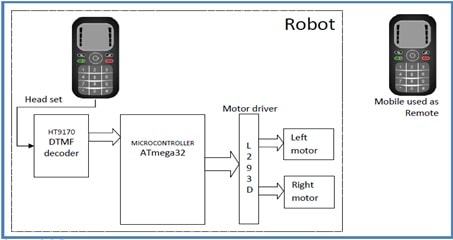 Fig abpve shows the  block diagram of microcontroller based mobile phone operated land rover and the important components are this rover are DTMF decoder , Microcontroller and integrated circuit motor driver. In this components block diagram one mobile is attached to the circuit which is used as a receiver to receive the DTMF tone generated by the remote mobile phone. DTMF tone decodes by DTMF decoder, this decoder convert this tone into binary form and then send to the microcontroller to perform the next task. The microcontroller is preprogrammed and it can take a decision automatically for any input to drive the motor in left or right direction

In order to check the working of robot you have to make a call on mobile phone, which is attached to the robot from any mobile phone. By pressing the any numeric button mobile phone sends the DTMF tune and this DTMF tune is received on the mobile which is attached to the robot .The robot phone woks on auto answer mod .DTMF tunes are received by the decoder, convert it in to equivalent binary number and send this number to the microcontroller (AT mega 16). When you press key 2 (Binary Equivalent 00000010) on your mobile phone, then microcontroller outputs would be 10001001 binary equivalent ant the ports pin PD0, PD3 and PD7 would be high. The output port PD7 connected to the motor driver circuit and when this port is high then on the motor drive circuit. The motors would be drive in forward direction when the ports PD0 and PD7 are high. Similarly these motors M1, M2 can be used for left turn, right turn, forward motion, backward motion and for stop condition.

The DTMF signal refers the system representation, coding and decoding the audio signal generated by the superposition of two pure sinusoidal tones. This system can be easily used for telephone signaling over the line in voice frequency band to switching call center. Space and Mark are the important parameter of DTMF tone. The time span in which the DTMF signal produced sound is called Mark time and the time span in which DTMF signal produced on sound means in silence zone  is called Space time. For pressing any key the DTMF signal is assigned a specific frequency, so that the electronic circuit can easily identified the signal. Any signal which is generated by the DTMF encoder in real time is a direct algebraic summation of two sine or cosine waves of different frequencies.

For rotating the motors in different directions left turn, right turns, forward, reverse and stop an algorithms are designed corresponding to the thrust applied on mobile keys .The algorithm flow chart is given in the below figure. 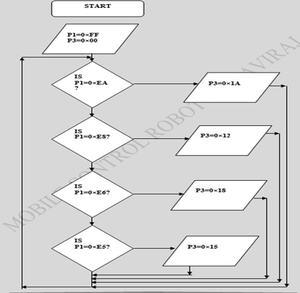 In this circuit MT8870 series DTMF decoder is used to detect all the 16DTMF tone pair and convert this tone into 4 bit output code. When the input is given at pin 2, single ended input configuration is recognized to be effective, the correct 4 bit decode is sends to Q1 through Q4 output. The ATMEGA 16 is low power 8 bit CMOS microcontroller based on AVR enhanced RISC architecture. 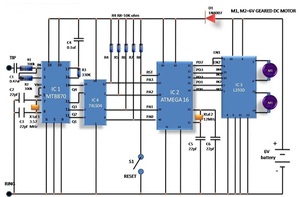 It provides the 16KB built in programmable flash program memory with read and write capabilities, 512 bytes of EEPROM, 1kB SRAM, 32 general-purpose input/output (I/O) lines and 32 general-purpose working registers. All the 32 bit registers are directly connected to arithmetic logic unit and allowing two independent registers to be accessed in one single input instruction, which is executed in one clock cycle .This architecture is more code efficient. Switch S1 is used for normal resetting. The lonely microcontroller is not sufficient to drive the DC motor therefore current drivers are required for the rotation of DC motor. The L293D is a quad, high-current, half-H driver designed to provide bidirectional drive currents of up to 600 mA at DC voltages from 4.5V to 36V

This wireless control robot is totally overcome the problems of wired control robot by using the latest technology of mobile phones. In this robot RF circuitry is used that remove the constraints of area range. The main advantage of this robot is to cover the limitless area.