Main Difference Between Microprocessor and Microcontroller

Although, we can differentiate both of them according to many features and aspects. But the main difference between them is tasks that they can perform. A microprocessor can perform various tasks depending on the user requirement. Some of the examples are web browsing, video gaming, sending emails, editing documents, etc. On the other hand, a microcontroller can perform only specific pre-defined tasks. Although a user can program it to perform any task. But once it is programmed, it can perform only specific tasks such as dc motor speed control, remote monitoring systems, etc.

A microprocessor is a general-purpose processor with no external components attaches to it. There are many microprocessors available that we use in modern computers and embedded system applications. Name of mostly practiced microprocessors families are given below:

A microprocessor is a general-purpose central processing unit of computers and embedded systems. It does not have any RAM, ROM, input/output ports, serial communication ports and timers within the chips. Therefore,  we need to connect these peripherals with microprocessors according to the user requirement. Therefore,  microprocessors are also called general-purpose processors. This is a general block diagram of every modern processor. We attach peripherals like I/O ports, RAM, Communication ports through a data bus and address bus.

As shown in the figure above, you just need to add I/O ports, serial communication ports, RAM, ROM and timers to a general-purpose processor to make it functional. The addition of these components makes systems more expensive and bulkier but they make a selection of system more versatile. Because user can select RAM, ROM, input/output ports and other features according to their requirement. 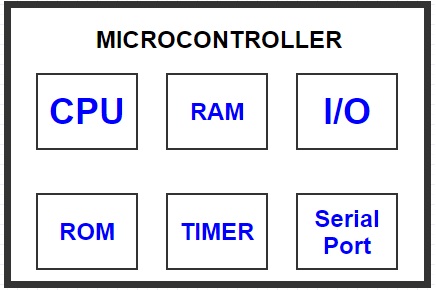 Where to use Microcontrollers?

There are many situations where we need to use a low-cost intelligent system like CPU. Therefore, it is more suitable for low-end product design. A microcontroller is the best choice for this kind of situation. There are immense applications of microcontrollers like in TV remote there is no need for a general-purpose or high-speed microprocessor. Because TV remote just sends IR communication signals to Television. Therefore it is a simple pre-defined task that a microcontroller is most suitable.

Microcontrollers take less space and require less operating power. In many applications, power consumption, the price per unit and space are the most important consideration while designing any real-life product. Microcontrollers are the best choice for such products.

The following are the major features to describe the difference between a microprocessor and microcontroller. Based on these aspects, we can clearly summarize the comparison between both digital integrated circuits.

The first difference between them is the difference in internal structure. Microprocessors only consist of a CPU. The central processing unit consists of two components ALU and Control unit. They are responsible for data processing and execution. But we have to connect all other peripherals such as memory, I/O devices externally.

Conversely, a microcontroller has all built-in features inside a chip. As they are used for specific tasks. Therefore, they require less memory and GPIO ports. As a result, it is easy to integrate all components inside a single chip.

Processors operate at the much higher clock frequency. It is in the order of Gega hertz these days. Modern processors even have more than one core in a single CPU. This helps to speed up the instruction’s execution rate. But further clock frequency enhancement becomes difficult. This limitation is due to more power dissipation per unit area. But still, they support processing speed between 1-4 GHz.

Contrarily, a controller only supports clock frequency in the range of kHz to MHz. It is usually between 1-300MHz. Low-level microcontrollers operate maximum at 20MHz. But the high end and special purpose can go up to 300MHz.

In the case of Microprocessor, the operating system is an essential part of modern computing systems. The operating system requires a large amount of memory to run and store source code. Also, CPUs make for high speed and high processing speed applications. Therefore, they need more memory to store and process data. RAM and ROM are main memory elements. RAM memory is available in the range of 512MB to 32GB and even 64GB.  These days two types of RAM are used such as DRAM and SRAM. You can read the difference between them here:

Due to the high-speed processing requirement, the microprocessor has power consumption. Also, they perform more than one operation at the time and applications running on the CPU are more complex. Conversely, the controller performs on certain and limited tasks. Therefore, power consumption is less.

Microprocessors and microcontrollers have huge applications in embedded systems. The printer is an example of an embedded system. Microprocessor insides printer performs only one task like getting the data from the computer and printing it. On the other hand, general-purpose processors used in computers perform various tasks. Like a general computer or PC is responds to keyboard, mouse, printer, LCD and servers, etc.

4 thoughts on “Difference Between Microprocessor and Microcontroller”