Resistor oppose the current to flow in circuit . For example, a resistor is placed in series with a light emitting diode to limit the current to flow from light emitting diode. Resistors are either connected in series or parallel connection. Resistors can be connected in any form without risk of damage. They damage only with extra heat. Resistance is measured in  ohm and symbol for ohm is Ω .  Resistance values starts from 1Ω and go upto mega ohms. Resistance values are shown using colour code. As different colours are shown in resistor symbol. Each colour represents a number which is used to calculate value of resistor. Each resistor have four colour

bands and each colour band have specific number assigned to it as shown in table. Follow the procedure the following procedure to calculate value of resistor using colour code.

By following above given four steps, one can easily calculate value of resistor without using any measurement meter. Ohm meters are also available which can be used to measure resistance of resistor.

Rheostat :  It is a type of variable resistor with two contacts. It is used to limit current in circuit.For example rheostat is used control lamp brightness, speed control of dc motor and it is also in timing circuits to control the flow charges to capacitor. Circuit symbol of rheostat is given below

Polarized capacitor is usually used in DC circuit. It is used to store electrical energy. This type of capacitor have polarity which means it should be connected properly with respective to positive and negative polarity. It is used in timing circuits, filters circuit to block DC and to pass AC. Circuit symbol of  polar capacitor is given below:

Non polarized capacitors are used in AC circuits. It is used to remove harmonics from AC signals and allow only specific frequency signals to pass into circuit. Circuit symbol of non polar capacitor is given below:

Just like a preset resistor, trimmer capacitor is operated with a small screw driver. Is is also set during circuit designing. Its value is adjusted before using it in circuit. Circuit sybmol of trimmer polar capacitor is given below:

Diodes are electronics devices which allow current o flow only in one direction. Practical diode and circuit symbol of diode is shown below. Arrow of circuit shows the direction of current flow. Arrow with vertical side is called cathode and other one is called anode. Figure below also shows circuit symbol of zener diode. I will explain it later. Diods have many applications in electrical and electronics circuits. For example rectifier diode is used to convert AC signal into DC in rectification. Zener diode is used in voltage regulator circuit. Diodes are also used as free wheeling diodes. Similarly

Light emitting diode is a type of transducers which converts electrical energy into light energy.

It is a special type of diode which converts light energy into electrical energy. same process is used in solar cells.

This is a simple push button it permits current flow only in one direction when button is pressed. It has many applications like electronics circuits, door bells, led lights charging lights and many others. Circuit of push switch is shown below:

It also allow current to flow only in one direction. But it works opposite to push switch. It stops current to flow when button is pressed. It is used in applications where we want continues power to circuit until button is not pressed. Circuit symbol of push to break switch is shown below:

It also allow current to flow in one direction but it have two states, on state and off state. SPST switches are used in domestic and industrial switch boards. Symbol of SPST switch is shown below:

As it name suggest single pole double through switch connects with one phase and allow current to flow in one of two possible circuits or routes. As shown in figure either upper or lower route can be connected to single phase supply.

It allows current o flow only in one possible route according to respective pole. It can be used to switch main electric supply it can use used to isolate neutral and live connections of main power supply. Circuit symbol of DPST switch is shown below:

It is also called reversing switch. It can be used to reverse direction of motor. It also have central off position. DPDT circuit symbol is shown below: 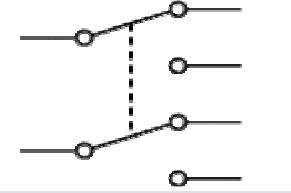 It is electro mechanical switch which operate with external power source. It is used to operate high power or high voltage circuits with low power dc circuits. It can be either normally closed or normally open. Its all three terminals are shown below:

Three types of transistors are used in electronics projects. Description of each of them is given below: 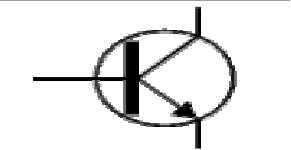 It is just a line which is used to represent path of current. It is shown below:

As shown in figure below, sold bold circle is used to represent one of more connection of wires. In other words, a point where two or more wires connect with each other.

Not connected point or wires crossing:

Following types of powers supplies are used in electronics and electrical projects.

Electrical symbol of battery is shown below. As I have mentioned earlier, battery consists of two or more cells. Battery supplies DC electrical energy.

Fuse is very important components of electrical circuits. It provides protection to circuit in case of over current or short circuit in electronics circuits. Fuse melts when excessive current flows through circuit.

Transformer is mainly used in AC circuits. But it is also used in dc power supplies to step down voltage. Transformer can be used either as step down or step up transformer. Transformer used electromagnetic induction to transfer energy from one circuit to another. Circuit symbol of transformer is shown below: 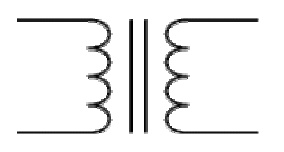 It is a transducer which converts sounds into electrical energy. Its circuit symbol is shown below:

It is a transducer which converts electrical energy into sound. Circuit symbol is shown below:

It is also used to convert electrical energy into sound with high amplification ability.

Amplifier has many applications in electrical and electronics projects. Amplifiers are used to amplify voltage, current and signals level. Circuit symbol of amplifier is shown below.

Antenna is a device which is used to transmit and receive data through wireless communication. Antenna is used to receive and transmit radio waves. Circuit symbol of antenna is shown below.

Lamp is a transducer which converts electrical energy into light energy.

Heater is a kind of transducer which used to convert electrical energy into heat.

Inductor is a coil of wire which stores a magnetic energy when current passes through it.

5 thoughts on “Electronics components and what they do”