TLP250 is an isolated IGBT/Mosfet driver IC.  The input side consists of a GaAlAs light-emitting diode. The output side gets a drive signal through an integrated photodetector. Therefore, the main feature is electrical isolation between low and high power circuits. It transfers electrical signals optically via light.

Users can use it to drive gate terminal of high voltage switches in both configurations such as high side and low side drive. It is available as an 8-pin DIP package.

We have already posted an article on non-isolated gate driver IR2110. MOSFET driver IR2110  is used to drive n-channel or p-channel MOSFETs in the high side and low side.

What is a MOSFET/IGBT driver?

It is the main component of power electronics circuits. Mosfet driver is dedicated to integrated circuits that are used to drive gate terminal of power switches both in the low side and high side configuration. To know more about gate driver check the following article:

What is MOSFET gate driver?

The Pinout diagram of TLP250 is given below. It is clearly shown in the figure that led at the input stage and photodetector diode at the output stage is used to provide isolation between high and low power circuits.

Pin number 1 and 4 are not connected to any point. They are marked as NC ( No connection). Hence they are not in use. Pin 2 is the anode point of input stage light emitting diode and pin 3 is the cathode point of the input stage. Input is provided to pin number 2 and 3. Pin number 8 is for supply connection. Pin number 5 is for a ground of power supply. 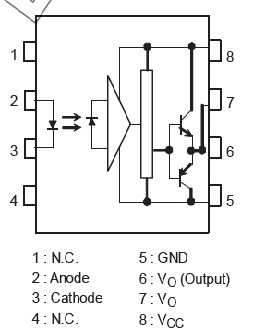 Details are according to the datasheet.

This all about pin configuration and now we will see how it works.

TLP250 has an input stage and an output stage. It also has a power supply configuration. It is more suitable for MOSFET and IGBT. The main difference between this and other MOSFET drivers is that it is optically isolated. Its mean input and output side are isolated from each other electrically. But electrical signal transfers between both sides through an optical signal.  It works like an optocoupler. The input stage has a light-emitting diode and the output stage have a photodiode. Whenever the input stage LED light falls on the output stage photo detector diode, the output becomes high.

As shown in the figure above input is a drive signal that drives the output. Vin is according to signal ground. It should not be connected with the supply ground and output ground. It is clearly shown in the above figure TLP250 and load ground is referenced to the power ground and it is isolated from input signal reference ground. When an input is high, MOSFET Q1 gets a high signal from TLP250 and it is driven by a power supply and current flows through the load.

When an input is low, MOSFET Q1 gets a low signal from a TLP250 output pin and Mosfet Q1 remains off and there is no current flow to load.  The value of supply voltage ranges between 10-15 volt. The input resistor at the gate of MOSFET is used depend on the amplitude of the input signal. Usually, the input signal is provided through microcontroller and the microcontroller input signal level is in the order of 5 volts. Capacitor C1 is used as a decoupling capacitor.

TLP250 as a high side MOSFET/IGBT driver Example

In high side configuration, there are three grounds as shown in the figure above. The ground of input signal, a ground of supply voltage and ground of power supply voltage. Remember that while using TLP250 as high side MOSFET driver, all grounds should be isolated from each other.

21 thoughts on “How to use isolated MOSFET driver TLP250”