PCSpim is a freely available personal computer simulator for MIPS. It simulates behavior of a MIPS processor on an Intel based machine. SPIM was originally developed by Dr James Larus at the University of Wisconsin, Madison around 20 years ago. You can download it from the University of Wisconsin, Madison website: http://www.cs.wisc.edu/~larus/SPIM/pcspim.zip. Using this simulator you can single-step your program instruction by instruction and see the changes in register and memory contents during the execution of the program. The programs are written in MIPS assembly language using any text editor like Notepad. Please note that you need to save your program using the extension “.asm” or “.s”.

Double click on PCSpim and the following screen will appear (picture taken from internet). 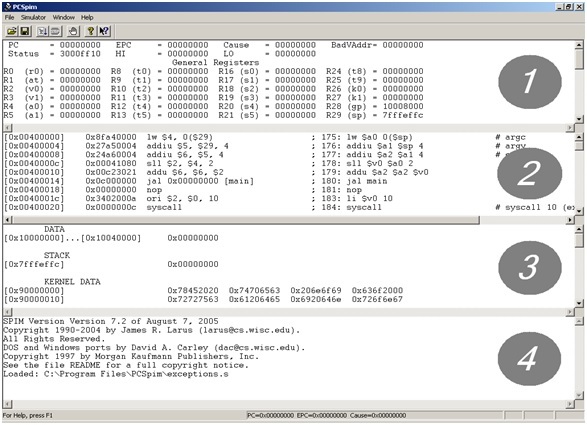 Different areas of the PCSpim screen are explained below:

Writing and Analyzing a Simple Program in pcspim

Let us run a simple program and see the working of the processor and the simulator. Open Notepad and type in the following code: (Note that PCSpim is case sensitive, also see the spellings of globl, all program code is in lower case except labels. The sign # is used for comments.  Do not type comments.) .text signifies the start of the text section of the program. Manually work out and write down the decimal values that various registers should contain after the execution of this program.  I have written results of each instruction, you should verify results of each instruction to get better understanding.

How to run pcspim simulator

Load PCSpim by clicking its icon present on the desktop or by opening it from the Start menu. If it asks for a path to some file, provide the path file from the folder where you have installed or copied pcspim simulator. When PCSpim opens, pull down the File menu and select Open. Open the file FirstProgram.s from the location where you saved it.

Viewing Registers  in pcspim as they change with each Instruction

Single step your program using F10, stop and fill the following table after execution of each instruction by observing the register window.  You can also use window’s calculator as needed, but be informed that Windows built-in calculator is 64-bit and PCSPIM is 32-bit. Place a Ö in OK column if you agree with the answer (i.e., after comparing with the results that you worked out manually earlier) .. You shall be required to provide all the answers in HEX form. However, you should view registers in decimal form to confirm your answers.  I have already filled the table. But I suggest you to compare your results with this table for better understanding.

Step 1: What is the value of $s0 after executing the first statement?

Step 2: What is the value of $s1 after executing the second statement?

Step 3: What is the value of $s2 after executing the third statement?

Step 4: What is the value of $t0 after executing the fourth statement?

Step 5: What is the value of $t1 after executing the fifth statement?

Step 6: What is the value of $t2 after executing the sixth statement?

Step 7: What is the value of $t3 after executing the 7th statement?

Step 8: What is the value of $t4 after executing the 8th statement?

Step 9: What is the value of $t5 after executing the 9th statement?

For $t3, do the calculations in 32-bit binary (by directly converting hex values of $s0 and $s1 given above) on the back of this page to verify your answer.

srl and sll shift the number by a specified number of bits towards the right and left respectively. Recall that shifting a number in binary is equivalent to multiplying or dividing the number with powers of 2, e.g.

and, or, andi, ori  are bitwise operations available in MIPS.

Masking can be used to extract bits from a given number, e.g.

Load this program and see how these instructions are converted into MIPS processor assembly by observing the third column of the text segment.