TDA1554 is a flexible IC consisting of 4 x 11 W single-ended or 2 x 22 W bridge amplifiers integrated inside the chip. It has two inverting and two non-inverting differential input stages. All the amplifiers are of class B and have a fixed gain of 26dB. used in single-ended or stereo BTL applications. It has an additional mute or standby feature which provides a very low standby current and a mute facility. It has single-ended and BTL configuration modes. 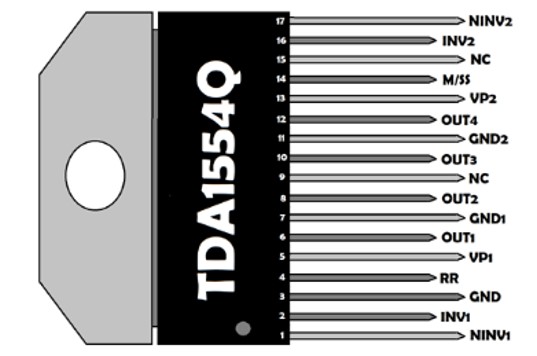 This audio power amplifier consists of 17 pins. As mentioned earlier, TDA1554Q has four audio amplifiers with an option of differential inputs. We can differential inputs with two noninverting and two inverting pins. Consequently, we can use it for single-ended or in bridge mode configuration. You can check the examples given at the end of the tutorial.

Output pins of the four amplifiers

This IC can be used in two modes namely single-ended or Bridge Tied Load (BTL).

Here, a quad single-ended application circuit is explained. The circuit given below is a 4-channel 11-watt home audio circuit designed using TDA1554. Each amplifier has four channels. It operates in a DC voltage range of 12 to 18 volts. This voltage supply can be provided from a 12-volt power supply having the capability to deliver 2 Amps. The circuit connections are shown in the diagram below. 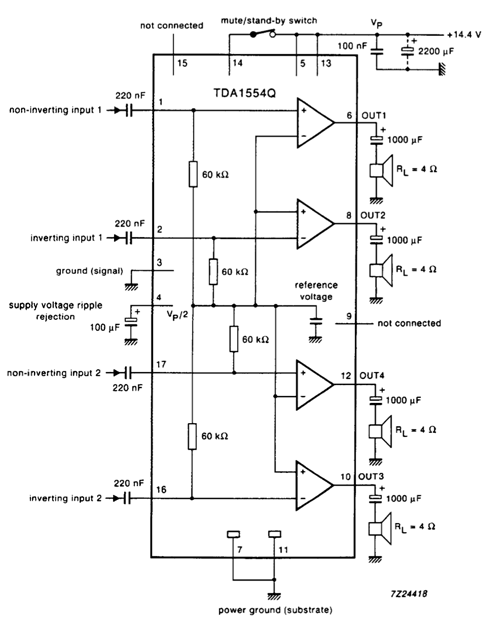 You can see that all the four inputs (two inverting and two non-inverting) are connected to a capacitor of capacitance 220 nF. These capacitors serve as filters. They only allow certain frequencies to pass through them while blocking remaining and remove noise. That is why they are connected in series with the input pins.

The output pins are connected to speakers of the impedance of 4Ω through a 1000µF capacitors. The output capacitors act as an isolator. They prevent the mixing of AC and DC signals by blocking DC signals otherwise harmonics will be generated. The voltage supply rejection is measured by a 100µF capacitor connected at pin4. Higher the value of the capacitor will improve the ripple rejection at lower frequencies. Pin14 is a mute or standby switch. It is connected to the power supply through a switch. When the switch is ON, it will disable the audio outputs. For normal operations, it is OFF. 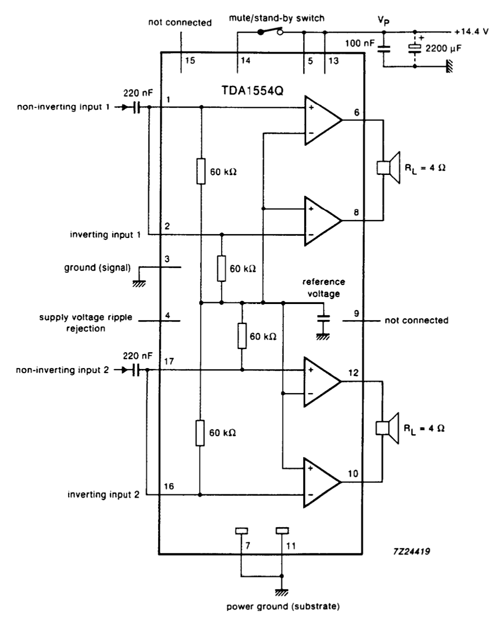 It is an audio amplifier IC used in: 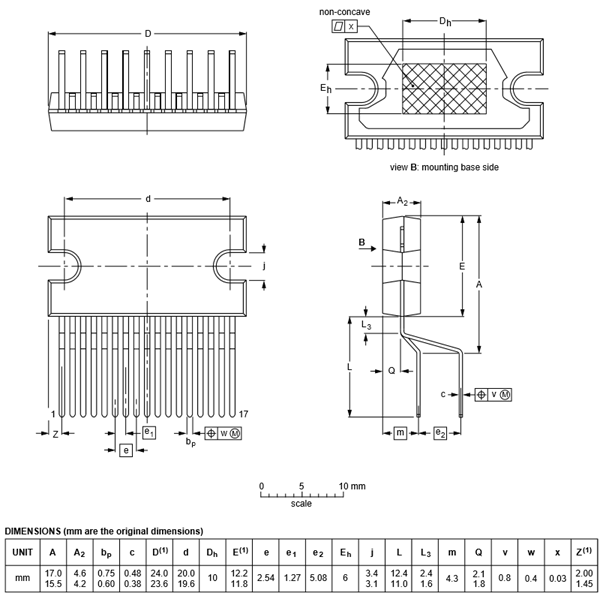