ACPWM control System for Induction Motor: ACPWM control for induction motor is a system, that enables the single-phase ac motor to run at different speeds. In market, different speed control drives are available in which also PWM (pulse width modulation) techniques are used but they have low efficiency, because they have higher order of harmonic content as well as their cost is also so much high. In conventional voltage regulators, voltages are regulated through triac, which produced the higher order of harmonic content. in this system we would substitute the triac with IGBTs for removing the higher order of harmonic content  On concentrating these issues, we have designed a system that is called a ACPWM control system for single phase induction motor.

Here is the block diagram of ACPWM control system for single phase induction motor with all their essential components: 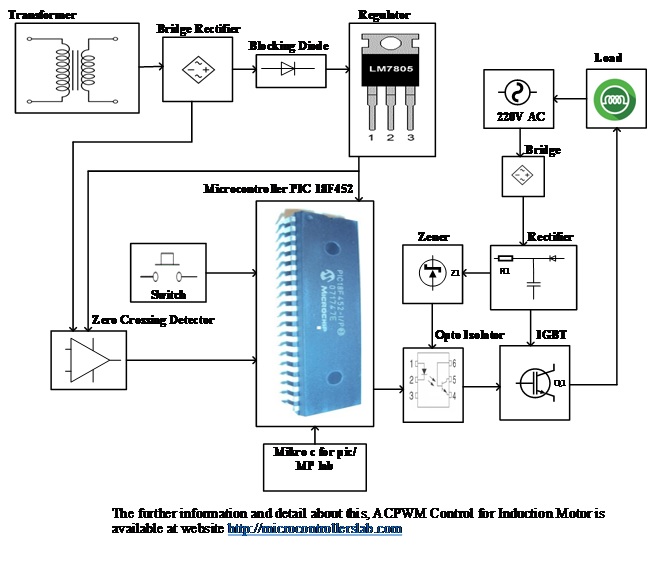 In this ACPWM control system for induction motor, the voltages are controlled from zero to maximum. The voltage control topology of this system is almost same as well as voltages are controlled through triac such as fan regulator or dimmer. But here will do this work with IGBTs and OPTO isolator and will reduce the higher order of harmonic content. This system is directly connected with wapda bur bar or 220V ac, when it relates to 220V ac then transformer steps down the 220V ac into 9 or 6 V ac then these voltages are converted into dc through bridge rectifier, after that, these dc voltages are regulated into 5V dc with the help of voltage regulator. Because this system consists of simple electronics and power electronics components therefore simple power electronic components such as microcontroller and zero crossing detector are powered up through voltage regulator LM7805.

Similarly, power electronics components such as OPTO isolator and IGBTs are powered up directly through 220V ac after converting into dc and filtering. The IGBT (insulated gate bipolar transistor) consist of three terminals such as collector, emitter and gate. When gate is triggered through PWM then this transistor goes into conduction mode and current flows form collector to emitter. PWM is generated through pic microcontroller, which is programmed in c language with the help of mikro/c software. The microcontroller is basically the main controller of this system which controls the duty ratio of PWM wave more efficiently and intelligently. This microcontroller is directly coupled with OPTO isolator which gives the logic high or low signal to IGBT gate. OPTO isolator also provides the galvanic isolation between this system and output load. In this ACPWM control system for induction motor a bush button have been used for changing the duty ratio or cycle. When switch is pressed then microcontroller changed the duty cycle of triggering pulse then output voltages are changed though IGBTs. Here for the test purpose, we have connected a lamp, when output voltages are increased or decrease then the light of this lamp is also increased or decreased, and we can easily examine the output voltages have been increasing or decreasing.

Applications and Advantages of ACPWM control System for Induction Motor: