In the tutorial we will learn some of the basic tips and tricks needed while working with LabView. These tricks will make it easier for you to use LabView, i.e. I will tell you how to do simple moves to arrange and sort blocks in a front panel, also what to do if there is no help key in the menu of a block. As it is just an informative tutorial, you should only keep in mind the points discussed in it and there is no exercise but the implementation of the tricks.

Introduction to front panel in labview

Whenever you open an existing VI in LabView or create a new one, two different windows will pop up. One of them is known as ‘Block diagram window’ and the other is ‘Front panel window’. The programmer is supposed to draw their respective block diagram using both of them as we have discussed, in quite a detail, in all the previous tutorials.

We have already used most of the indicators and controls in this panel in our previous tutorials. Below is the list of all the controls and indicators available on the control palette.

Above are only few of all the blocks available in the control palette. We have already used most of them, and the remaining will be used in the upcoming tutorials. Now, let’s come to the main purpose of the tutorial. We are going to discuss some quick and easy tricks of front panel just to clear things up a little about VI’s. Firstly, we will talk about the reorder ability of front panel.

Grouping ability of elements in labview

When you place a series of blocks connected with each other, or you simply decorate a button or a key with on and off labels (free labels). As we have done in the section above. Now, if we want to move these blocks from one place to the other then we will be required to move every block separately. But using the tip of grouping will save you time. Select all the blocks you want to move by hovering over the blocks, as shown below. 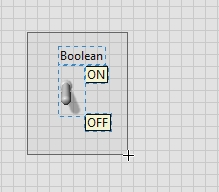 From the top right corner, click on the reorder button and from the drop down menu select Group, this will group all the selected blocks together and now when you move the blocks they will all move together and save your time.

Locking and unlocking elements in labview

Once you have placed all the components in their desired or expected location, you can restrict their movement by using the lock button in present in the dropdown menu of reorder button, this lock key will not allow you to move the locked blocks in the future unless you unlock them from unlock button, see the figure below. 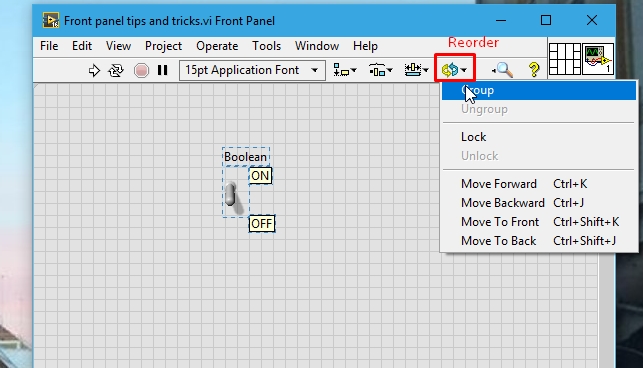 Alignment of blocks in labview

The tricks discussed in this tutorial are just to improve your programming skills while working with LabView, they are to be considered to do efficient programming in lesser time. All of the tricks cannot be mentioned in one tutorial and there is a lot in LabView to learn about. Try to explore the front panel as well as block diagram and learn more tricks on your own to increase your pro-efficiency with LabView