What is MPU 6050 Sensor Module? MPU 6050 sensor module is an integrated circuit board which is made up with the combination of three axis gyroscope, three axis accelerometer and digital motion control processor. All these items are packed in a small single device and this device provides complete solution for any six axis motion tracking system. Beside this, this device also has an extra features such as temperature sensor feature, 12C bus interface to communicate with microcontroller and 12C auxiliary bus interface to communicate with three axis magnetometer pressure sensor etc. If this magnetometer pressure sensor is connected with 12C auxiliary bus, then this MPU 6050 sensor module can easily provide nine axis motion fusion output. This sensor has so many applications such as in robot for self-balancing, UAVs smart phones and it also helps the object which is attached with this sensor to the get the exact position in three dimensional space. These are easily available in market and also available at online shop. A simple MPU 6050 sensor module is shown in figure 1 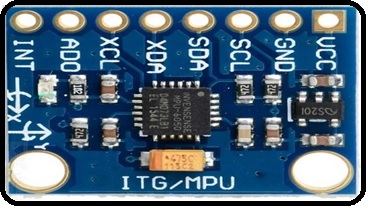 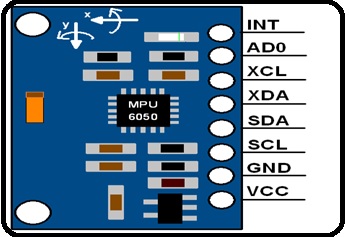 MPU 6050 sensor works on the principle of MEMS (micro electro mechanically system) technology. Basically, this sensor module is a six DOF (degree of freedom) or six axis sensor module therefore it has six outputs. From these six outputs values, three are come form gyroscope and three are come from accelerometer. Because both gyroscope and accelerometer are embedded inside a single chip therefore it uses 12C (inter integrated circuit) protocol for communication. So, the accelerometer in this chip works on the principle of piezo electric effect. Suppose a small box which a ball inside it and the walls of this box are made with piezo electric crystal. When we tilt this box then the ball force to move in the direction of inclination due to gravity. When this ball collides with the wall of box then a small piezo electric current is produced. On the basis of this current we can determine the inclination angle and its magnitude. Similarly, the gyroscope works on the principle of Coriolis acceleration.

How to Interface MPU 6050 Sensor Module with PIC 18F452 Microcontroller