This system would be installed prior to the consumer energy meter. When any one or consumer would steal the electrical energy, in other words in this condition the consumer will be consume the lager energy as compared to the normal energy. Then this system will be sense this energy and cut off the power supply to the consumer side. This is designed with the help of pic microcontroller 18F452, GSM modem for connect this system to the wireless network, LCD display,transformer,bridge rectifier, voltage regulator, max 232, energy meter and optocoupler. 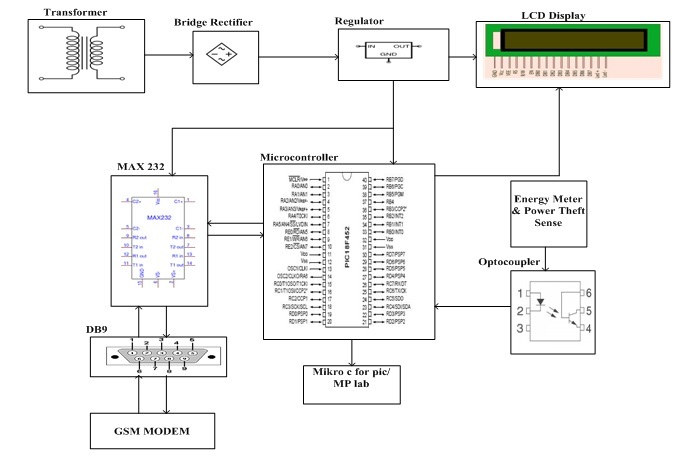 Energy Meter: Energy meter is basically, the watt meter which tells us, how much energy or watt we have consumed in one hour. It measures the energy in kwh. This meter is interfaced with microcontroller through the optocoupler.

Optocoupler:Optocoupler is 6 pins integrated circuit components, which transfers the electric signal between two electrically isolated circuits using the light. It consists of a light emitter such as, LEDs and sensitive light receiver such as photo diode or photo transistor. When any one or consumer theft the electric energy then the optocoupler sense this energy, and give the signal to the microcontroller. During this condition the microcontroller turn off the electric energy of consumer.

GSM Modem: The GSM modem in electric energy theft intimation system is used for connecting this system to the wireless network. The data or intimation is received or sent through this GSM modem and the microcontroller on or the off the electric energy of consumer based on this intimation or data. Therefore, this is very significant component of this system.

Transformer:In electric energy theft intimation system, the transformer is only used for connecting this system directly to the wapda power supply. It converts the 220V ac into 12V ac.

Bridge Rectifier:The bridge rectifier converts the 12V ac into dc for supplying the power to the other components. It is made of 4 back to back diodes.

Voltage Regulator:The voltage regulator is connected at the output of bridge rectifier for regulating the dc voltage. The microcontroller, LCD and max 232 are powered up through voltage regulator.

Max 232: The max 232 is dual channel integrated component which is only used here for serial communication between the microcontroller and GSM modem.

LCD Display:The LCD display is used here only for displaying the data or intimation which is sends by the microcontroller.

DB9:The DB9 is just a connector, which is used here only for connecting the GSM modem and max 232.