What is a pic microcontroller?

Before starting with pic microcontroller programming in c, lets have a overview of pic microcontrollers. A pic microcontroller (sometimes abbreviated as uC or MCU) is a small computer in a single integrated circuit containing a processor core, memory and programmable I/O peripherals. Program memory in the form of NOR flash is also often included on chip, as well as a typical small amount of RAM.Pic Microcontrollers are designed for embedded applications in contrast to the microprocessors used in personal computers or other general purpose applications.

Microcontrollers are manufactured by a number of companies with varying features. As technology is advancing, not only new features are being added in the previous controllers’ family but new families are also being introduced. The most common controllers used are PIC, Atmel, AVR, Intel, ATmega etc. Even in a single family you will find a lot many variations from number of pins of the chip to number of features provided in it.

What Functionalities are provided by a pic Microcontroller?

Analogue-to-Digital Converters (ADC): Many embedded systems need to read sensors that produce analog signals. This is the purpose of the analog-to-digital converter (ADC). Since processors are built to interpret and process digital data, i.e. 1s and 0s, they are not able to do anything with the analog signals that may be sent to it by a device. So the analog to digital converter is used to convert the incoming data into a form that the processor can recognize. A less common feature on some microcontrollers is a digital-to-analog converter (DAC) that allows the processor to output analog signals or voltage levels.

Timers:  In pic microcontrollers programming timers are very useful. In addition to the converters, many embedded microprocessors include a variety of timers as well. One of the most common types of timers is the Programmable Interval Timer (PIT). A PIT may either count down from some value to zero, or up to the capacity of the count register, overflowing to zero. Once it reaches zero, it sends an interrupt to the processor indicating that it has finished counting. This is useful for devices such as thermostats, which periodically test the temperature around them to see if they need to turn the air conditioner on, the heater on, etc. Timers are a very important part of Microcontrollers that would be focused on in later labs.

Universal Synchronous Asynchronous Receiver/Transmitter (USART): This block makes it possible to receive and transmit data over a serial line with very little load on the CPU. Dedicated on-chip hardware also often includes capabilities to communicate with other devices (chips) in digital formats such as I²C and Serial Peripheral Interface (SPI).

Mainly C language is used for programming of pic microcontroller. But a specific name is given to this c language and it called embedded C. Though C and embedded C appear different and are used in different contexts, they have more similarities than the differences. Most of the constructs are same; the difference lies in their applications.

Pic microcontroller programming data types in MikroC Pro for Pic
A few important points you need to remember while coding in MikroC Pro are listed below:

There are a number of ways you can read and write internal registers of a microcontroller.

Step 1: Open MikroC from your desktop the following window will open. 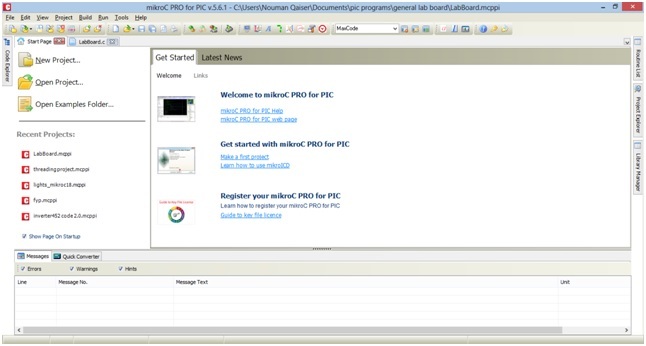 Step 2: Click on the New Project, A new windows would appear. Click next. The following windows will appear: 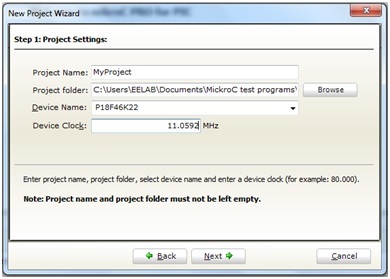 Step 3: Select the folder you want to save your project to.  Select the device name from dropdown menu. Check the value of crystal you have been provided and mention that in device clock.Click Next and complete the wizard, A new window appears in front with the following code window. 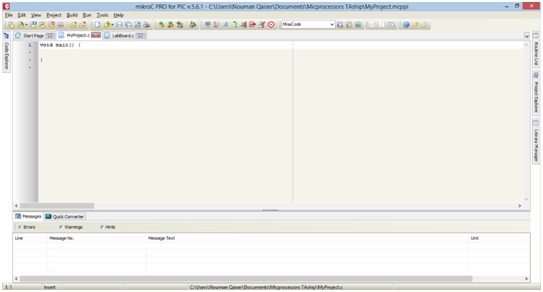 By default, a ‘main’ function has been created for you, you would remember from you knowledge of CS200 that every program start executing rom the main function, though you could define any other function outside. To know about pic microcontroller programming in Mikro c for pic, check this video lecture:

The setup of Mikro c pro for pic for pic microcontroller programming can be downloaded from this link. If the setup prompts you for the installation of MikroProg drivers or MikroProg suite, select yes to continue.Assembling your hardware. Make the following circuit on your breadboard. 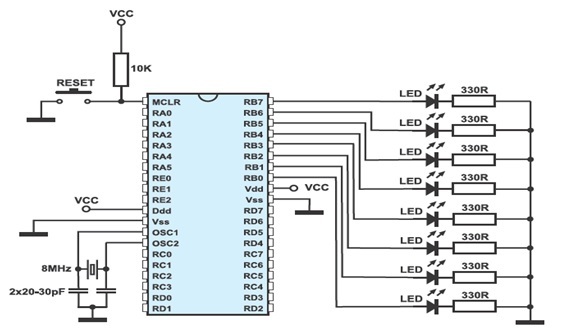 Microcontrollers are very sensitive equipment. Any mistake in connecting the power pins might permanently damage the internal hardware. Please consult datasheet of your controller to know the absolute maximum voltage rating on VDD with respect to VSS. Power your microcontroller using 5V output of your power supplies.

You should be well aware by now that every digital circuitry is run on a clock. Same is also true for our microcontroller, this clock can be provided using a crystal oscillator, external RC oscillator, Square Wave, and internal oscillator block of a microcontroller. In our labs we will be using a crystal for clock since it is every accurate and requires minimum circuitry.  The two capacitors connected to the crystal are called loading capacitors, they are required for proper functioning of crystals.

Every microcontroller has an active-low reset pin, when the reset pin is connected to the ground the microcontroller forgets everything and starts executing the code from start. During normal operation this pin is pulled up using a resistor to VCC, to avoid involuntary resets.

code that turns on led for 1 second and turn it off after 1 second.

In this task you have to create a running Traffic light system, For the sake of simplicity, your traffic system will be only for two roads, each equipped with three LEDs,