In operating system the term scheduling is referred as scheduling the CPU to different (simultaneously running) processes according to their arrival time or time to completion. There are certain terms (times) in operating systems lets define them first.

The time at which the process arrives at the CPU demanding for its execution.

The time at which the process leaves the CPU after its completion.

The total time a process will need with the CPU to complete its execution, where

Hence, we uses multiprogramming in almost all the modern computers now, in which, while one process is waiting for the I/O operating to be done, some other processes may use the CPU for its execution at that time and the CPU may not have to wait and is used efficiently. And in order to run all the currently required processes, we schedule the processes to terminate their execution and give other processes chance to use the CPU, to fulfill the condition of multi programming i.e. all the processes have enough time to complete their execution in reasonable time.

This is what we call scheduling in operating systems. Scheduling is divided into different types depending on which process the CPU will run first and based on what conditions. These types are explained briefly below.

In this method the process which comes first will be executed first. It will have a large turnaround time if the longer jobs arrive first.

The processes having the shortest turnaround time will be executed first. If short processes keep coming it will cause starvation for the longer jobs.

The process whose time to completion is the minimum of all will be executed first. It has less turnaround time, but the response time is very high.

It is the scheduling algorithm in which processes are assigned priority numbers. Whenever a process arrives it is given the highest priority and after completing a certain (fixed by operating system) time in that queue it will move down to the lower queue. The CPU will execute the process which is in the highest queue first and then after that defined certain time it will move downwards. 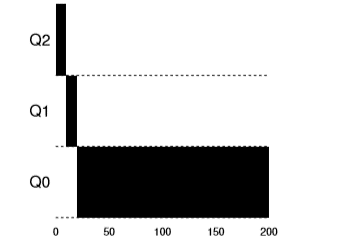 In multilevel feedback queue there is a large chance of starvation for the processes at the lowest priority queues. As the gamers may achieve the ability to remain in the highest priority queue as shown in the figure below, 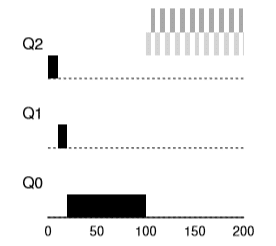 This issue can be resolved by using a priority boost to the lowest level queue after the burst time of CPU is completed as shown in the figure below, 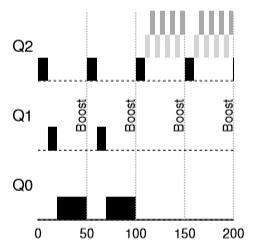 Lets’ now have a look on preemptive and non-preemptive scheduling.

In preemptive scheduling, we can take back the CPU from the processes whenever we want to take it back. CPU is allocated to a process for only a specified or limited time and CPU will be taken back from the same time after some time, either the process has completed its execution or not. 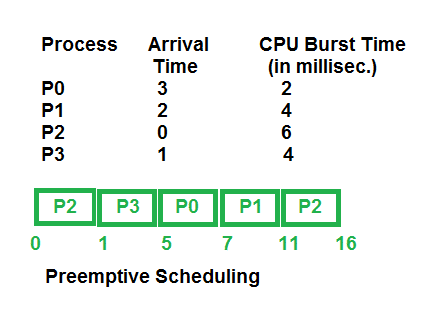 The main advantage of it is that if a process is using CPU, it will never interrupt it to get CPU, it will always wait for the other process to terminate or go to waiting state to get up the resource. This way CPU does not get overloaded. The non-preemptive scheduling method we have discussed in this tutorial is Multi-level feedback queue scheduling. The non-preemptive scheduling method is shown explained briefly in the figure below, 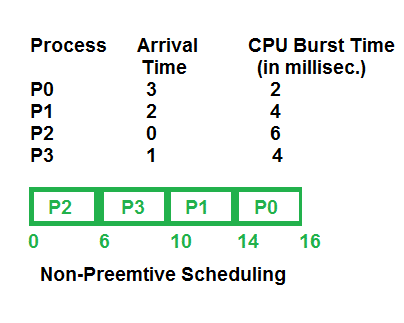 Below is provided the comparison chart of preemptive and non-preemptive scheduling algorithm.