Touch screen based home automation system is a system that controls the home appliances automatically such as fans, fridge, lights and all type of other appliances which are mostly used in homes. With the passage of time, the world is becoming advance more and more as well as our daily used items are also becoming smart and smart. Similarly, home appliances are also becoming smart and smart therefor it is so much necessary that their control should be also smart means their control should be automatically. Currently, in our homes we have been using wall switches for controlling the home appliances which are installed at different walls of our homes. Sometimes, it is very difficult for the user to operate these switches specially for the elder and physical handicapped user.

So many systems are available in market which have been using for controlling the home appliances automatically, but they are not so much efficient and reliable as well as their cost is also so much high. Beside this these systems are also do not have touch screen facility for controlling the home appliances. On concentrating the above issues here, we have designed a device that is called a touch screen based home automation system. This system has designed with the help of touch screen LCD, ac transformer, bridge rectifier, voltage regulator, RF transmitter, encoder and microcontroller 18F452 belongs to pic family. This system is more efficient, more reliable and less costly as compared to other systems. The block diagram of this touch screen based home automation system with all their essential components is shown in figure 1.

Here is the block diagram of touch screen based home automation system with all their essential components, 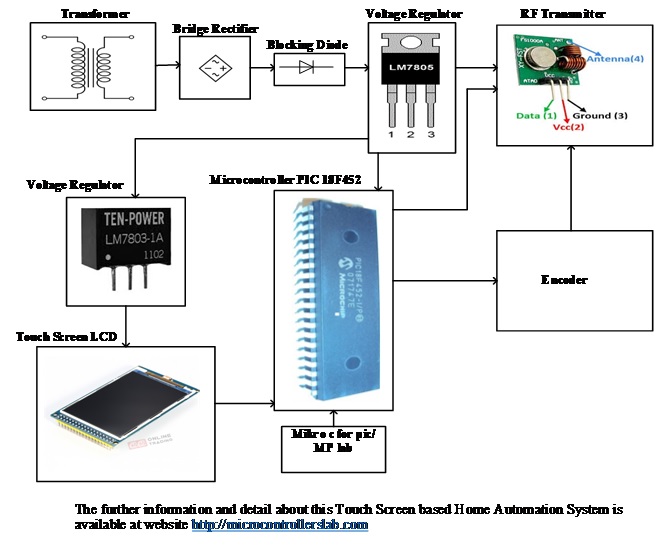