74LS04 is a 2 input quadruple 8-bit NOT gate IC. Inverter in logic converters is an electronics device whose basic functions are to invert the incoming logic weather it is HIGH or LOW. They are also known as NOT gates. Inverters are easy to design using NMOS and PMOS transistors. They have only one input and one output. The basic function of transistors is to give the opposite output with respect to input signals. The basic circuit of the NOT gate by use of transistor design is larger in size which is complex and costly as compared to other solutions.

To solve this problem, we use different ICs that come inverters, the 74LS04 is one of the best IC of 74LS series to use as a transistor. The 74LS04 comes up with six internal inverters. Every inverter uses a single power supply and it can be used individually like each other. The inverter IC comes up in multiple packages, which make its usage in multiple devices. The IC is cheaper and smaller in size. In summary, 74LS04 IC is TTL/CMOS based, it makes IC much reliable to works with other microcontroller TTL devices.

This a pinout diagram of hex NOT gate 74LS04IC. 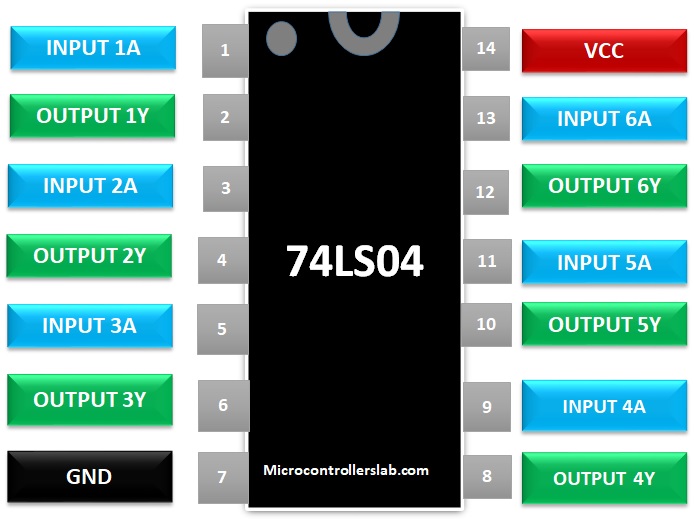 This table lists 74ls04 NOT gate details of all pins. 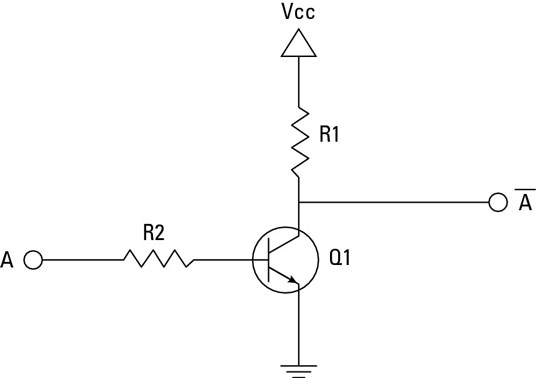 The conversion of NAND and NOR can be done by adding the two not gates on the input, but to reduce the size we add NOT gate at the output which makes us use the one NOT gate only for single gate conversion. The NOT gate only converts the input from HIGH to LOW and LOW to HIGH, but they cannot invert the wave or any signals like transistors can do.

In 74ls04 IC when we combine the two NOT gates together then it doesn’t have any effect on the output because when the first inverter will convert the state then the second inverter will change the state again. Whenever we use even no of NOT gates in series then there will be no effect on output. The even number of NOT gates will cancel out each other effect. The only odd number will let the change only, even its 1,3 or 5. We will prove this condition in proteus. First, connect the NOT gate with the logic state then check the states it will operate according to the above truth table.

As we can see the input inverts from 74LS04 NOT gate. Now we will use two NOT gates in series and will analyze the output.

You can see in the image that there is no effect on the output when we apply any input when we connect three 74ls04 NOT gates in series. Then connect the odd no of gates and see the result.

The odd no of gates will act as the same as the single gate does. The series connection will not have any effect on the circuit individually but whenever we want to change the state of single inputs in any other gate than we could connect NOT gate to at the input. Some time multiple NOT gate also used to make proper logic for the circuit. So, we always need to remember whenever the multiple NOT gate will affect the circuit when they are in series with the same wire. If multiple NOT gates attached with the same wire then we can remove them because if they are even in number then remove all of them otherwise use only one, which will minimize the circuit cost and size.