Before starting with 74LS73 DUAL JK FLIP-FLOP, let’s first understand that what is it? Flip-Flops and latches are those small devices used to store a single bit. A single flip-flop represents two-state, in which data is stored is represented by 1 and the other is represented by 0. An SR latch has two problems. In SR latch the S = R = 0 should be avoided by the system. The other problem is the correct latching problem may not occur when the enable pin is high. To solve this problem a JK flip flop is used. JK flip-flop comes up with an internal SR latch circuit, but it also has a clock installed. The clock solves these two problems. JK flip flop was named by the designer name Jack Kilby. JK flip flop clock gives some extra functions too. It gives four input combinations, which are logic 1, logic 0, no change and the third one is a toggle.

To understand 74LS73 we need to understand SR latch first. In SR latch there are two inputs. First, one is Reset and the Second one is known as a set. The output should be HIGH at least one pin and another pin should be at a LOW state. There are four logic states in which SR latch operates, which is when there is different input on both input pins but when there are same outputs then in case of 1,1 the output becomes invalid and in case of 1,1 the output becomes unpredictable. So, to solve this issue in JK flip-flop an internal clock has been installed. The clock controls the change in output with the input state.

JK flip flop comes up with two SR latch and four NAND gates as you can see in the below image. The first latch is used as Master and another SR latch is used as Slave. The two NAND gates and Slave SR latch gives the input to Master SR Latch. The output of the Slave latch to Master helps the JK flip flop to toggle. pulse. The input signal of Master is connected to the NAND Gates. The output of the NAND gates has been attached to anther pin which is known as clock pin. Clock pin only allows the NAND gate

to give the output to the master when the CLOCK get a rising pulse. When the clock is LOW then there will be no output. The output will be ignored in case of LOW Pulse. The output of Master Latch will be given to the Slave when there will be HIGH to LOW pulse to the Input gate of Slave Latch. This clocking process between Master and Slave makes the flip flop to transfer the data from the master to slave with a timing signal.

The following outputs will be done on given inputs.

X = No change of Pulse 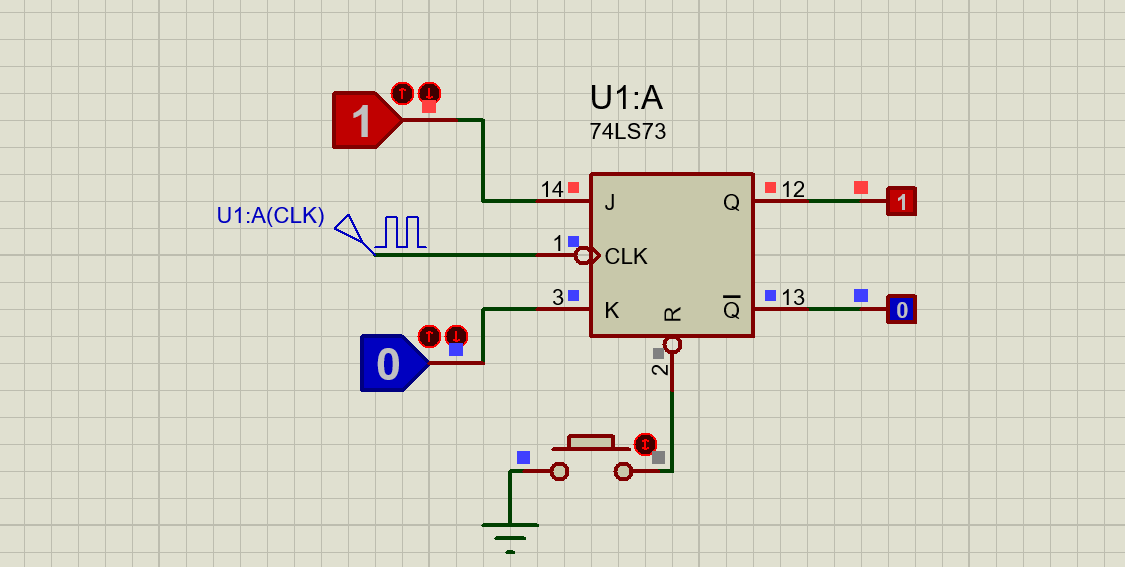 Now here we will understand the other two states. Now Apply the HIGH logic at the “J” then you may notice that Q is turned one, but when you even tried to change the logic at “J”, it will not be affected. Because this shows that a bit has been stored in flip flop. To remove the stored bit just use the reset button. In digital devices, this reset function could be done digitally. The reset button will clear the bit from all the output pins but If we use another method like turn “J” to LOW and “K” to HIGH then bit will shift from Q to Q’. This shifting isn’t from Q to Q’. It comes from the K.

Now we will discuss the last state which is one on both inputs. When we apply the one on both inputs than one on output will toggle. The output will not be stable. It will keep changing with the speed to the input clock signal. These all four effects describe how to flip flop will store the data and will avoid sending the invalid data from the flip flop.