ATtiny85 microcontroller is one of the small and high-performance AVR microcontroller, which is based on RISC CPU. It is one of the 8-pin microcontrollers that comes in two packages, used to control and interfacing between different devices and sensors. It comes with 10-bit ADC and MSSP. ATtiny85 is one of the low power consumptions and a small-sized microcontroller with 8Kb EEROM and 512 bytes RAM which is enough to store the instruction code. The microcontroller also has some safety features like watchdog timer and it has a vast use in automation and other embedded systems, which makes it still reliable till in the modern era.

Pinout diagram and further explanation of pin configuration for this small Avr microcontroller are listed in this section. All these details are according to its datasheet. 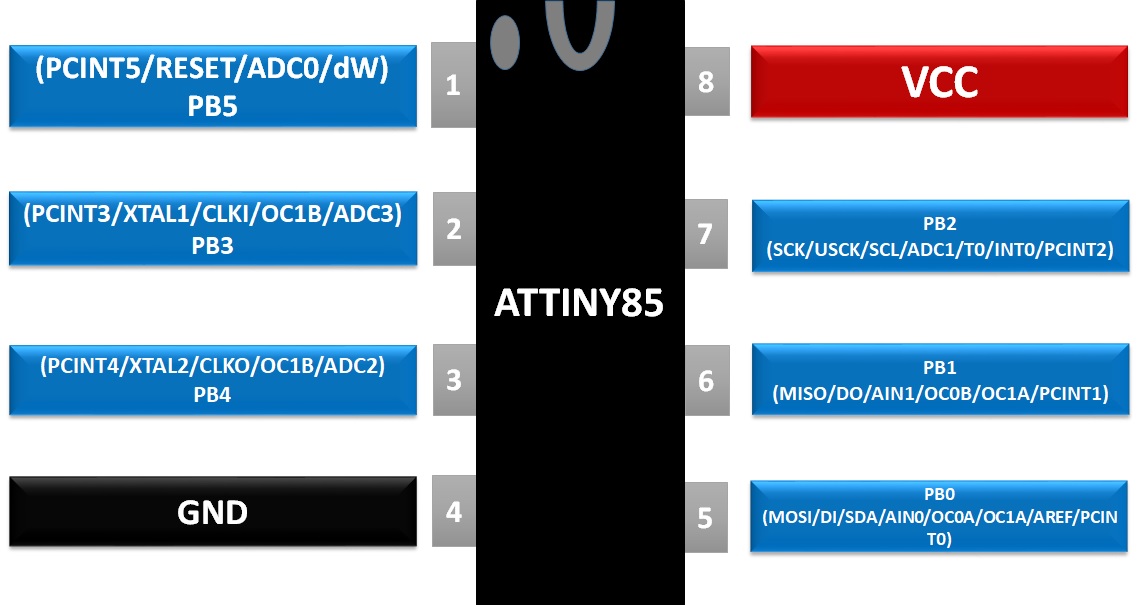 Now, we will discuss the pin diagram details one by one as mentioned in the datasheet.

POWER INPUT: ATtine85 has only two power pins due to its limited number of pins. One of the power pins will be for power input and second will be used for common ground. The power-on microcontroller should not be increased than its designed maximum voltages:

OSCILLATOR/CLOCK: It comes with an 8MHz internal clock and the value of the clock can be variate from 0-8Mhz but ATtiny85 has the ability to expand the oscillator up to 20MHz. To increase the oscillator value, it should be connected to the oscillator pins of the microcontroller, which are:

DIGITAL INPUT/OUTPUT: In this microcontroller every pin except power pin. ALL input/output pins are connected to bidirectional Input/output register through internal pull-up registers. Any pin can be used for input or output purpose but first, it should be described in a program which function it should follow. All those input/output pins are:

MOSI pins are used to send the data from controller, MISO is used to receive the data and SCK is for clock pulse. Debug wire will only use in case of programming.

I2C: ATtiny85 also have I2C communication protocol ability. I2data is being sent and received by a single line and another line is used to send the clock pulse to keep the data sync according to the time. ATtiny85 also has I2C pins which are:

TIMER/COUNTER/COMPARE: In ATiny85 there are some special pins which can be used to drive the external power safely by a combination internal PWM signal input. These pins are able to operate according to specific time which is called Dead Time Generator. The timer starts counting and keeps comparing its value until it reaches zero. In ATtiny85 two dead time generators are used by counting through Timer0 and Timer1 and output signal comes in both inverted and non-inverted form, in other words, we say in non-overlapping form. The List of these pins are:

ANALOG TO DIGITAL CONVERTER:  ATtiny85 has 4 analog input channels. The analog input is converted into 10-bit digital output. ATtiny85 convert the analog data at the 65-260us speed which is enough to keep the system update at every second. Analog input voltage level is decided according to the power supply voltage, which can be some time cause error for external devices. To remove this issue an analog reference pin is used, which helps the system to understand the voltage maximum and minimum level according to the given voltage reference. The reference voltage and analog input signal voltage should not be exceeded from the actual voltage handling power of the controller. Analog pin of ATtiny85 are:

RESET: Microcontroller also comes with an external and internal reset. It can be reset from the program on a specific condition or it can be controlled from an external pin.

The block diagram of the microcontroller ATtiny85 is: 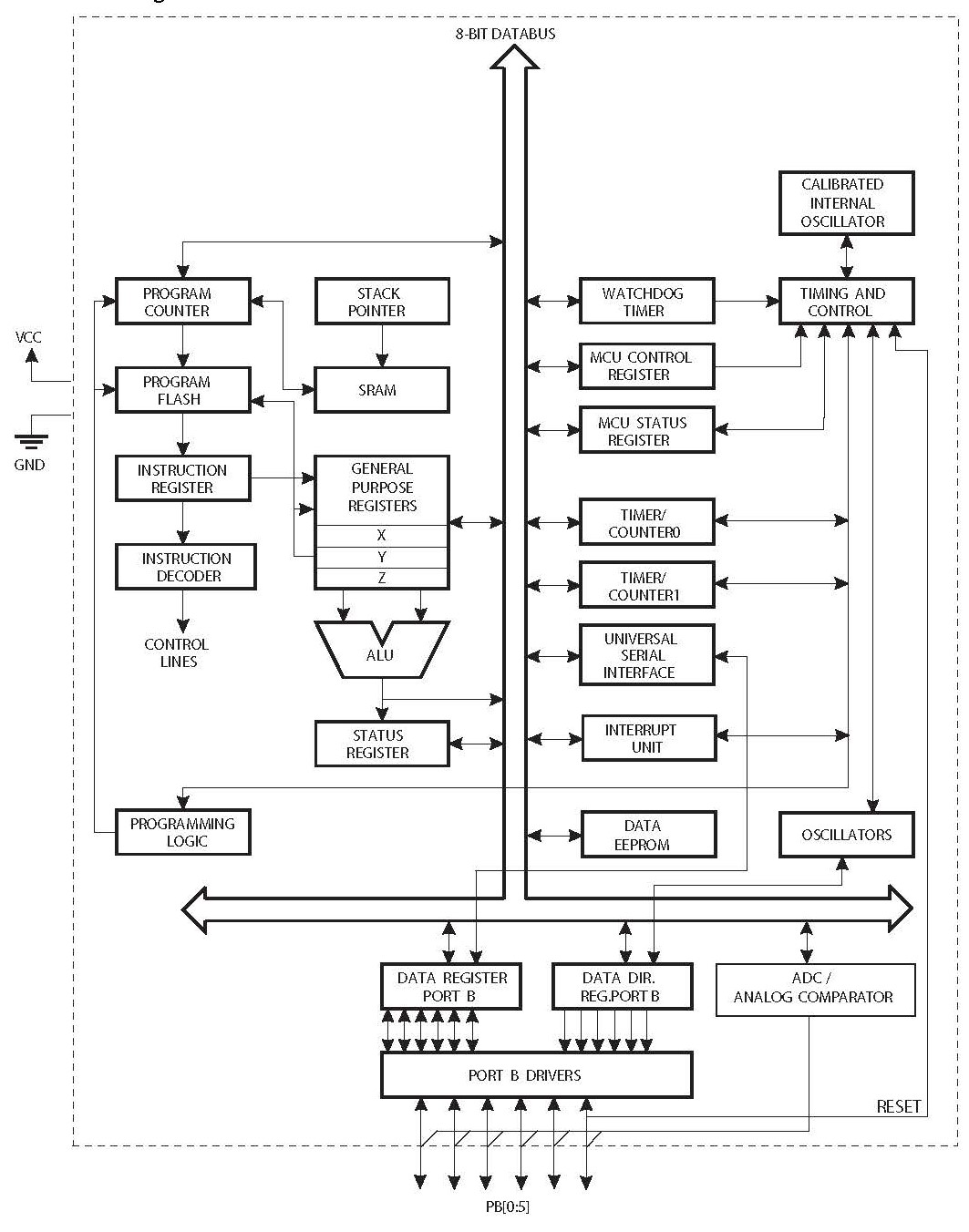 There are multiple modules within the controller but all of them are independent on registers to operate. For details and further information on their registers for programming, you can go through the datasheet.

BROWN OUT RESET: Brownout reset is used within the IC, which protect it in low voltage situation. Whenever the voltage will lower down from threshold then it will reset the IC and multiple voltage ranges are also used to protect the IC.

WATCHDOG TIMER: It is one of the best resetters in most of the microcontroller. To activate it only instruction will be given at the start of the program. It will not affect anything of the controller unless the controller stops operating and then watchdog timer will reset the ATtiny85 and will start it again.

DEBUG WIRE: In SPI pins you may notice that we talked about SPI programming method to the PIC but to program any controller through the SPI protocol a debug pin will be used which will cut the program instructions from the CPU and then it will program the non-volatile memory. The use of a debug pin will be only in case of SPI pins are present on the controller otherwise it won’t have any specific use.

DEAD TIME GENERATOR: It is the output pairs of PWM within the ATtiny85 which allows the controller to control the external control switches safely. It operates by using a PWM pulse and a zero check is used with the Dead Time Generator to check the counter has been finished. The Dead Timer Generator helps the output two be non-overlapping.

The total memory map of ATtiny85 is given below:

We see an example of an LED blinking with a push button.

This code simply turn on an LED connected with PB5 according to state of switch that we connect with PB4.