ATtiny88 is one of the cheapest and smallest 8-bit microcontrollers with CMOS technology which also comes in 8-kb programmable flash memory. This  IC comes in multiple packages with 28-pins, which can be used for multiple purposes which almost cover every application, and it also is designed with AVR RISC Architecture. The performance of the microcontroller can be optimized by the designer, the internal architecture gives the ability to the designer to optimize between speed and power consumption. ATtiny88 microcontroller can work with multiple application and its power save modes gives the ability to work on battery power with other applications.

The pin configuration details of for DIP package is given below: 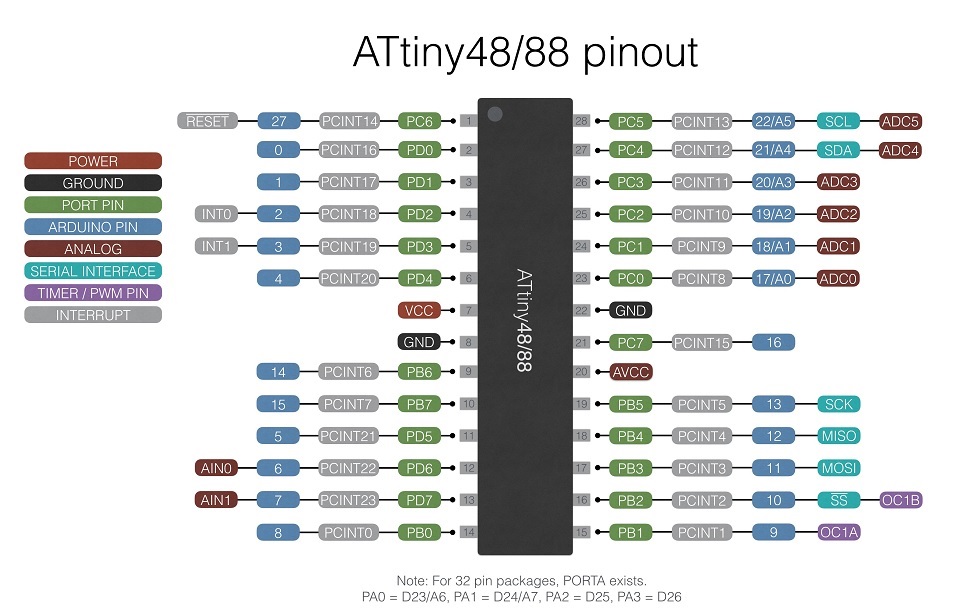 The pinout diagram for the SMD package is given here: 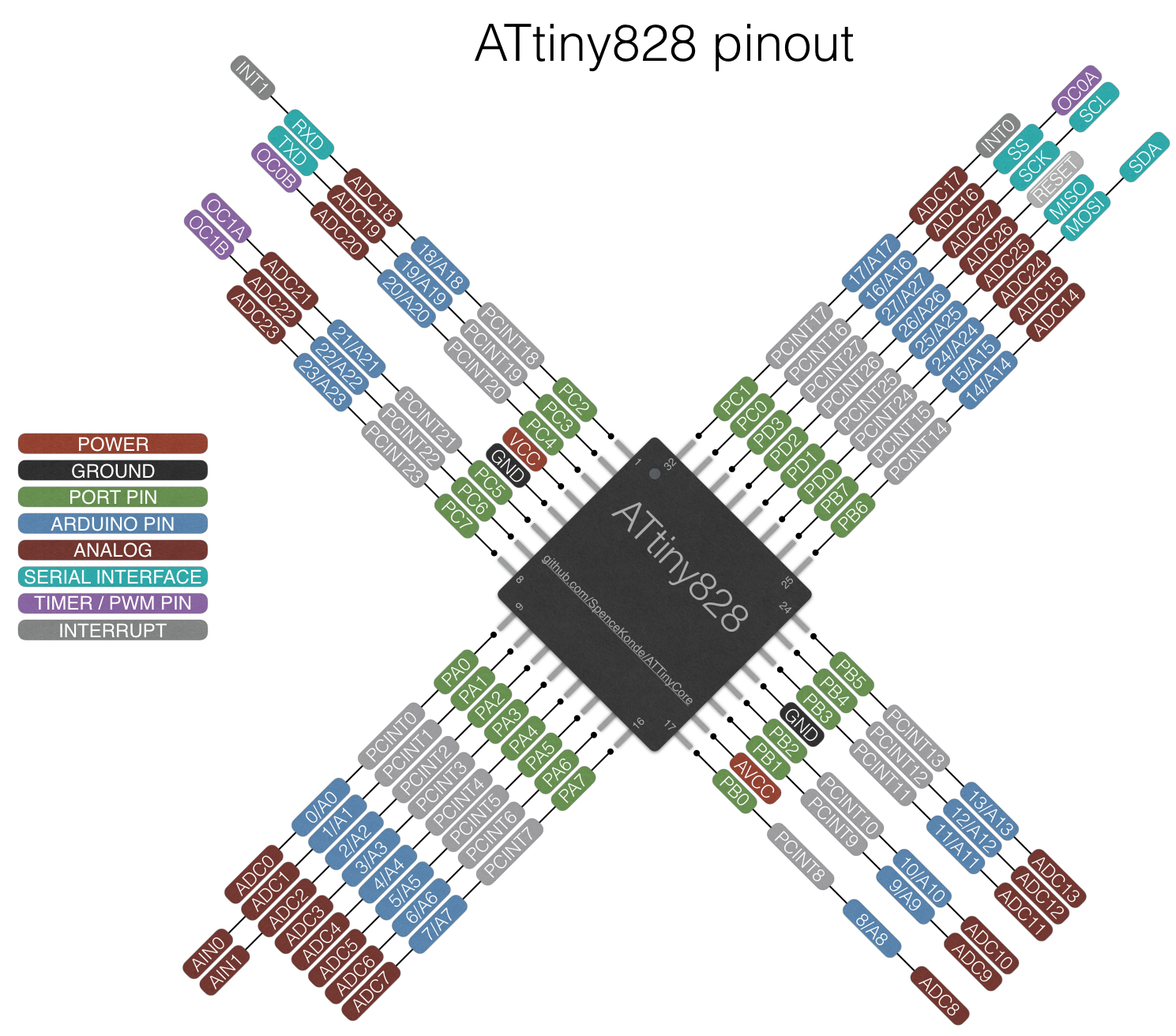 Pin Configuration Details of all Pins

The number of power pins in ATtiny88 is three, from which one is used for power input and the remaining two can be used as a ground pin. The ground pins are internally connected and can be used for common ground by any device or the power supply that is being used with the microcontroller.

ATtiny88 has three GPIO ports which are 8-bit. Port A only exists in some packages Most of the pins can be used for output/input functions. All these ports also come with an internal pull-up resistor, they also have sink and source ability. ALL input and output pins on ATtiny88 are:

ATtiny88 has a fully operated SPI communication system that can be used to communicate multiple sensors and multiple measuring modules to works smartly. To use the SPI protocol four pins are required. All those pins are listed below:

MOSI and MISO are for data sending and receiving, SCK is used to send the clock pulse to the device to transmit and receive the data according to time and the final pin SS is used to select the device. Here officially microcontroller has only one slave select pin but almost ever output pin can be used as SS’ pin through programming in case of requirement.

The IC also comes with two internal timers. Both get the input pulse from the external pins and can be operated internally. One timer (Timer0) is 8-bit and the other timer Timer1 is the 16-bit timer. Timer pins are:

ATtiny88 has 10-bit analog to digital converter which can be used by 6-analog input channels. Every channel converts the analog input signal to digital then store it within a 10-bit register. Analog pins in ATtiny88 are:

The analog to digital converter of the ATtiny88 requires external voltage to operate. This voltage can be provided through an external pin AVCC. In every condition even ADC of the microcontroller is not used, the voltage should be provided on the pin.

The block diagram of the microcontroller ATtiny88 is given below: 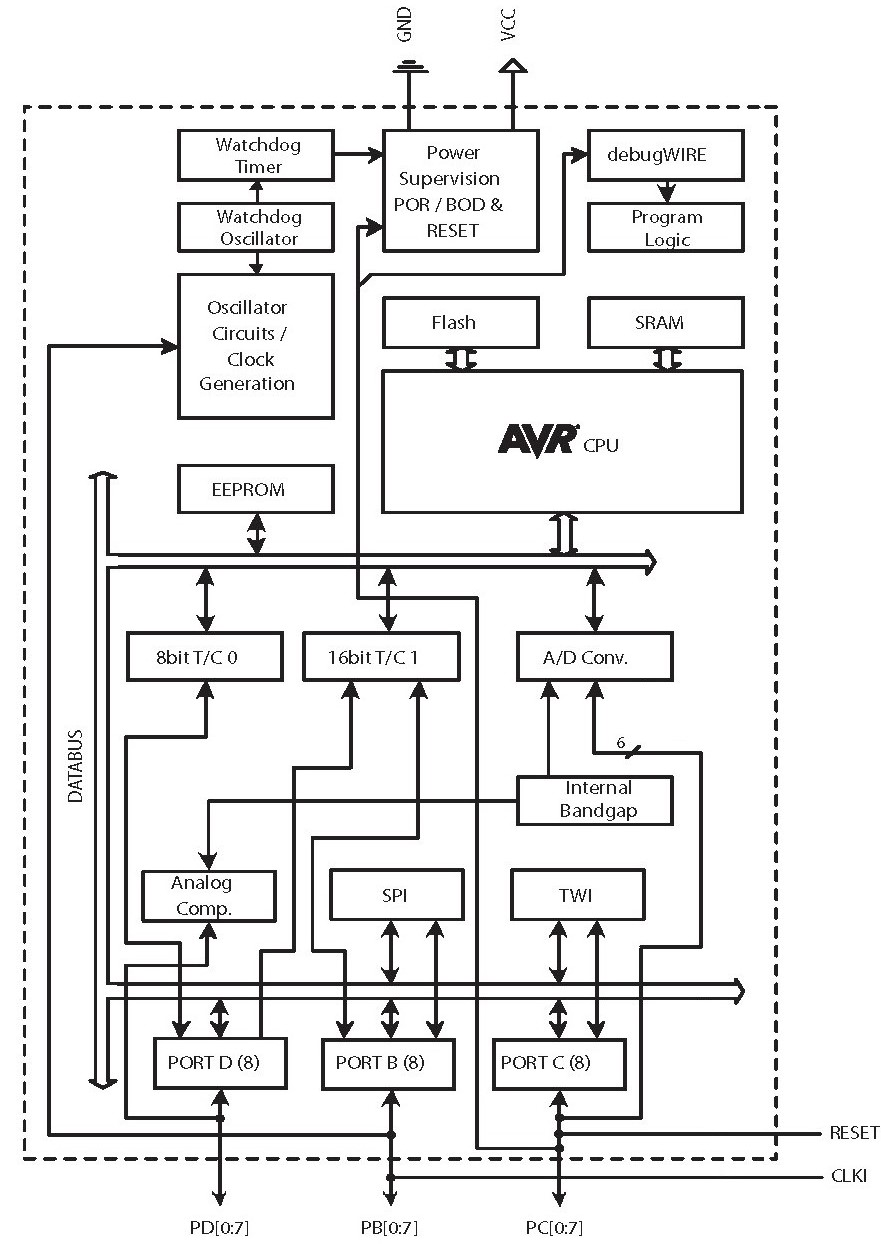 There are multiple types of peripheral in the controller which has multiple uses:

TIMER/COUNTER OUTPUT COMPARE: This timer/counter output compare is an internal counting method used to count clock pulses. These clock pulses can be broken down with Prescaler to minimize the minimum counting limit. It is also attached to the external output pins which generate the output whenever the internal clock cycle has completed its limit. The ATtiny88 has two timers one is 8-bit and the second one is 16-bit time.

POWER VARIATION: This feature doesn’t come in most of the microcontroller. This power variation gives the ability to the programmer to variate the performance and power consumption of the controller according to the requirement. Both power and performance have direct relation, in case of increasing performance the power consumption will be increased automatically.

WATCHDOG TIMER: It allows the device to reset itself in case of an error or getting stuck at some instruction to keep performing the operating and to keep the device active.

The dimension diagram for a 28 pin DIP package is shown here. 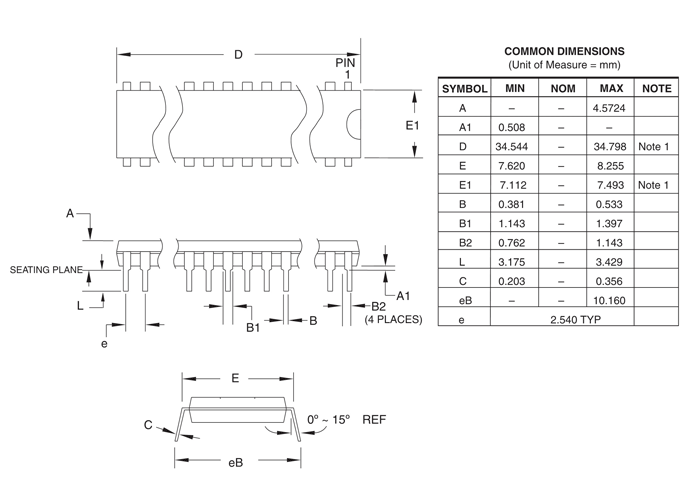