hi everybody Difference Between 8 bit 16 bit and 32 bit Microcontroller. Today we’re,talking about some tech trivia and I’m,not going to go super deep into the technology behind this but I wanted to cover what the heck doesn’t mean when something says it is 8-bit 16-bit 32-bit,or 64-bit or even hundred and twenty 8-bit in the future when we’re talking specifically about microcontrollers and micro processors well that can refer to the data bus with the addressing width so kind of how many different unique memory addresses can it understand or the register width and the register width is really how much data.Can you manipulate at once with an 8-bit microprocessor that is treated as 2 to the 8th so that is 255 unique numbers so 0 through 255 because it’s 2 to the 8th minus 1. 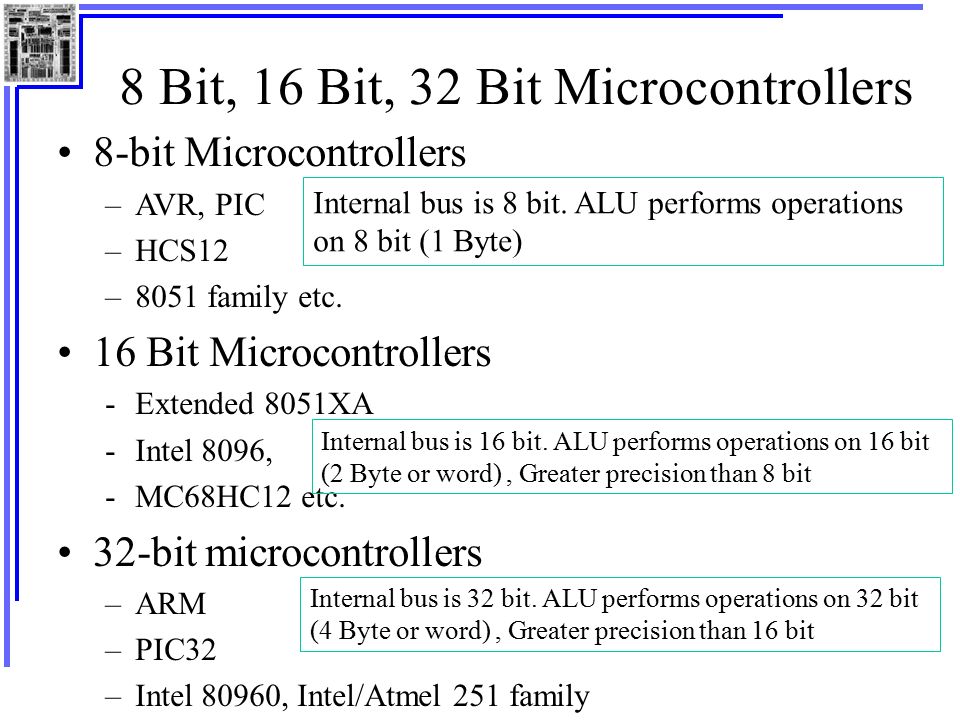 if you move to 16-bit that is actually 65,000,approximate and if you move up to 32  you’re in the 4.3 million range.So as you want to work on larger and larger numbers you actually need greater ,register widths so you can actually deal with them low register lengths when you’re dealing with the 8-bit 16-bit,32-bit 64-bit in the memory addressing space it’s actually something  we ran into recently with computer memory all of our personal computers generally were based around the 32-bit microprocessor.

That meant it could address 2 to the 32nd unique memory spaces this limit us to an effective about 4 gigabytes of RAM. Realistically it was around three point-two five gigabytes of RAM no. Moving into the 64-bit realm it actually allows us terabytes of RAM so huge amounts of vast storage that we can use for working with programs now some of the history about the 8-bit 16-bit 32-bit microprocessor is actually the first 8-bit microprocessor that I really know of is the Intel 8008 it was produced in 1972 it was the first general-purpose 8-bit microprocessor microcontroller and then what’s really,interesting is it didn’t take very long,for the world to get to 16-bit 32-bit and 64-bit in fact the Cray 1,supercomputer was using 64-bit register,length so come feel a huge amounts of data and that was in the 70s and 80s but it actually only,had a 32-bit memory addressing space.

So it was still limited to the gigabytes of RAM which in that day and age was an enormous amount of memory. Now you might be wondering yourself okay so this affects the amount of data that a processor can manipulate it affects the amount of memory that it can address but at the end of the day what does it really matter well since everything the majority of part you’re working on nowadays are 32-bit or 64-bit where it actually comes in differences are the unique instruction sets implemented on each processor so typically you have your add your multiply subtract divide,functions but then you get into unique,situations where you have a RISC or a CISC processor this is reduced,instruction set or complex instruction set processors a reduced instruction set processor breaks up the actions that manipulate memory so translating from a register to the memory versus the register to register actions .

so these commands won’t all do one or they won’t do everything in just one go they will,first manipulate the registers and then put that back in the memory or then pull,it out of memory whereas complex instruction set micro processors those would be like your x86 ones so what you would expect from Intel or AMD those ones can do memory manipulation and,memory storage or retrieval in the same instruction so it’s just a different way to think about it and right now the majority of our phones are embedded devices all those are on reduced instructions that micro processors and,microcontrollers one of the reduced,instruction set styles of computing would be the arm microprocessor arm is a company out of the UK that helps to design microchips and micros micro architectures and helps to specify,exactly which instructions will be present within the code that people can rely on for doing data manipulation.

It is a reduced instruction set style of implementation so one set does memory and other does manipulation they don’t all do one at once but arm micro architecture is probably the most common one you’re familiar with it’s present in our phones as present in all of our embedded devices and it is a set of No instructions and architectures that everybody well that all arm licensees can implement in their own chips so what I’ve got here is I’ve actually got a,free scale kinetise M0 plus this is actually an arm M0 plus micro architecture that free scale has implemented on their chip so it follows the instruction set for the arm M0 plus.

So when you’ve got M0 pluses.  Generally all M0 pluses have a subset of instructions that they will all have in common they all have similar behaviors and pretty similar performance but different implementations result in better power savings or other things I also have the tried-and-true Arduino Uno. It has an atmel 18 mega 328p on it that’s an 8-bit reduced instruction set microprocessor and then when we get into the world of much more powerful things . This is the brand-new Raspberry Pi 3.this has a Broadcom chipset on it is actually 64-bit ARM based microarchitecture so it can handle much higher amounts of memory and much larger numbers that it can crunch thanks for joining me for this dive into the,kind of fundamentals the basics on what,the difference is between 8-bit 16-bit,32-bit 64-bit microcontrollers,