The word fragmentation is derived from the word “fragments” which means smaller pieces. Whenever a large chunk is divided into smaller pieces by any means or for any purpose, we call the process “fragmentation”. Fragmentation in computer systems, similarly, is a process of using main memory such that the storage space is used inefficiently and is divided into small portions of memory rather than a larger one piece of memory. We do this intentionally sometimes to use memory efficiently, for instance, in paging. But when the sum of all the smaller chunks of memory is larger than the needed memory but we cannot adjust the data in pieces of memory, this is called fragmentation. It reduces and efficiency as well as the performance of memory usage simultaneously.

Whenever we talk about fragmentation in the memory of a computer system, we mean small holes which are formed in memory house whenever a method is loaded or removed form a physical memory. Mostly in case of dynamic memory allocation, the process of memory allocation and deallocation results in memory fragmentation i.e. all the memory blocks are too small to fit in a given block of data however, the combined small blocks of memory are larger than the size of the data block to be saved in memory. In memory blocks, if there happens a fragmentation, the system fails to assign the contiguous memory house to processes. Fragmentation can be divided into 2 different types depending on the memory division method used in the memory.

For the sake of using memory efficiently, we divide memory in smaller fixed size blocks as we have studied in paging. The basic purpose of using pages is that these pages can be easily accessed and moved from secondary memory (hard disk) to main memory whenever we need processing. These blocks however sometimes result in the wastage of memory, as we will discuss in this article. Internal fragmentation happens once the memory is split into mounted sized blocks. Whenever CPU gets a process for execution the main memory stores the data of the process (code, heap and stack) in fixed sized blocks (pages) in the main memory. If the size of the block (fixed size) in the main memory is larger than the memory blocks a process can need than the left-over space which is neither too large to accommodate a complete process in it nor too small to be ignored when calculating memory wastage. This internal fragmentation when used occurs on a larger scale results in a large amount of memory wastage which cannot be ignored.

The image below explains the process of internal fragmentation really well. 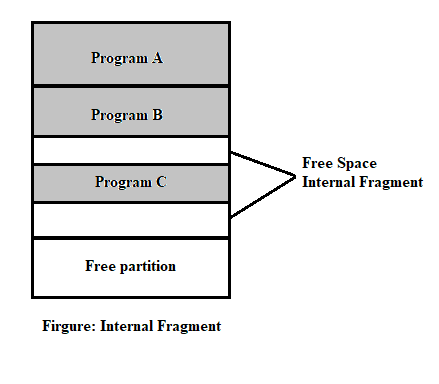 External fragmentation is way more similar to internal fragmentation, just a simple difference lies in between which I will discuss here. Let’s suppose there is one single chunk of memory available for storing information and data, and a process arrives, and we want to store it in the memory. The process will be stored in the memory dynamically in the memory, i.e. randomly, wherever it finds space or feels comfortable. When the next process arrives, it will adjust it accordingly in the memory space. But now let’s assume, we remove a process i.e. its data from the memory, in this case the process will leave a hole in the memory and it cannot be used with the other memory no matter even if it resides next to the free memory as shown in the figure below.

There is a total of 7kb available in the memory, but we cannot use it store a process of size 5 kb or larger because it is not contiguous, rather it is present in portions. This problem is called external fragmentation and it is also a result of inefficient memory usage which in the end results in memory wastage and performance issues.

One of the most commonly used solutions of external fragmentation is coalescing. In this method we actually combine all the free memory blocks and make it one large memory block as shown in the figure below, 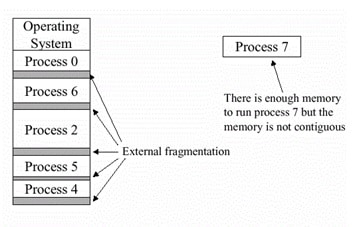 What are the differences between internal and external fragmentation?

The figure below shown the comparison between internal and external fragmentation in detail. 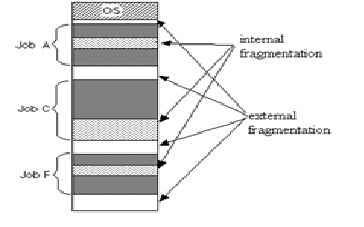