In this article, we will see the differences between processes and threads used in operating systems. The duty of OS is to manage all the interfaces of the applications that are being run by the computer. The applications make requests with the help of the operating system through an interface-API. Furthermore, GUIs or user-interfaces can be used to make an interaction with the operating system. All computer platforms require the need to develop communication between the computer’s hardware and software. Operating system makes use of numerous different algorithms to perform a variety of different tasks. The terminologies- thread and process are linked to this.

Comparison Chart for difference between process and thread

If you do not have a basic understanding of processes and threads used in operating systems. I recommend you to read this introductory information on both topics.

The word process can simply be defined as the execution of a set of particular set of instructions yet to be executed. Therefore, it is only a specific instance of a program when it is being run by a computer. Plus, a program can be linked to various processes. There is ratio of one to many between them. Any process is the executable program code. It is the duty of the operating system to create, schedule and then truncate all the different sort of processes that can further be used by the CPU. The processes that are created by the parent process are called the child processes.

All of the operations related to the process are handled by using Process Control Block. It has all of the information relevant to a process, so it is basically the thinking unit of the process. It contains the ID of the process, its priority, current state etc.

PCB is a type of data structure that is used in kernel side and its functions can be categorized into three types which are as follows:

The state related to a process is its current condition. They are as follows; ready, blocked, running and terminated. These are used to keep a check on the current condition of any process. If we see the point of view of a programmer, the processes are a way so that concurrent execution can take place. This is important because the main and child processes are supposed to have know-how of the details of each other for the sake of doing an assigned task together.

The i/o operations of a process when overlap with the computational activity of the other process, computation speed may be significantly increased.

Characteristics of a process

Threads can be divided into to categories:

The main purpose of using threads is to divide a process into different parts which browser, a couple of tabs can be opened at the same moment whereas the process is single. This is achieved using threads. Moreover, Microsoft Word also uses the concept of threads. Different threads are used for different purposes i.e. one of the threads can be used for the format the text, another one can be used to insert pictures etc.

Processes and threads differ from each other in various ways. The main difference is with respect to the memory space. Threads of the same process use the same memory space whereas each process has its own area in memory. Moreover, threads are linked to each other. No thread can exist independently. The same is true for processes. Therefore, the threads can share a section of code, data and operating system resources with each other. Each thread also has its own registers, program counter and separate stack. 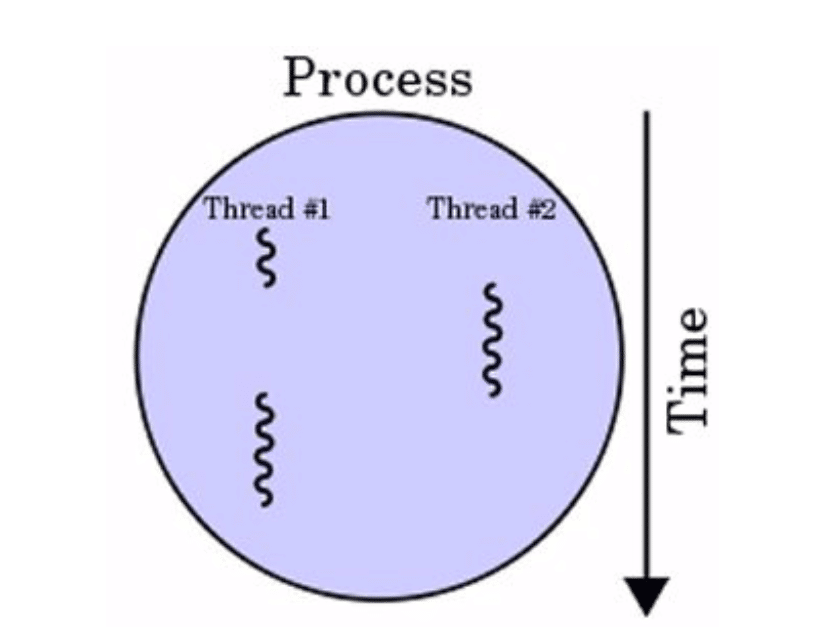 Advantages of Thread over Process

Threads are preferred over processes due to various reasons. Some of them are as follows: