What is Flex Sensor? Flex senor is a such type of sensor which measures the amount of bending or defection. Actually, it is made up with carbon surface on a plastic strip when this strip is bend or deflect then the resistance of this flex sensor is changed therefore it is also called bend sensor. Because its changing resistance is directly proportional to amount of bend therefore it can also be used as a goniometer. There are two types of flex sensors are currently used in industry according to their size first one is 2.2 inch flex sensor and second one 4.5 inch flex sensor. The resistance and size of both are different but working principle is same .So the appropriate size is chosen according to requirement. Here we are going to discuss 2.2 inch flex sensor. These types of flex sensor have been using in different applications such as in security system, rehabilitation ,computer interface, music interface, servo motor control, intensity control or where the user wants to change the resistance during bending. These are easily available in market or online shop. A simple flex sensor is shown in figure 1 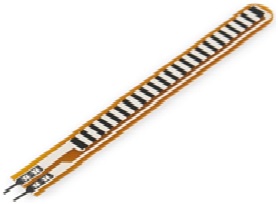 Flex sensor is a tow pin or two terminal device such as p1 and p2. It does not  have any polarized terminal like capacitor or diode, means there is no any positive or negative terminal. For power on this flex sensor 3.3V to 5V dc voltage are applied on its terminals and these voltages are gained from interfacing device which could be any type of controller. These voltages are applied according to below table.

How to Interface Flex Sensor with Arduino Board?

Figure 3 Interfacing of  Sensor with Arduino Board

Then logic program is up load in Arduino board with the help of Arduino IDE software. Similarly, when flex senor is bend then resistance is changed and this change in resistance could be seen by changing the intensity of LED light.