GSM Based Speed Control of DC Motor Using PIC Microcontroller: In this project, an easy method has been proposed in order to control the speed of the DC motor by simply sending an SMS from mobile. The purpose of designing this system was to convince the user that speed of the motor can be controlled anywhere by using the SMS application. As an SMS receiver, Siemens TC35 GSM module has been used and is then connected with MCU PIC16F877A for the processing of SMS. Dual H-bridge Motor Driver L293D IC is relating to MCU for controlling the speed of the motor where the PWM method has been used. This project is practically implemented. 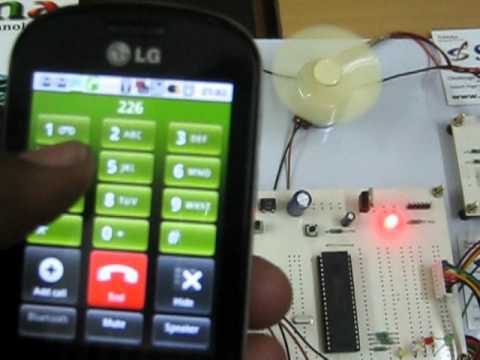 Normally, Motors are used for automation, industrial control and as a home electrical appliance. It divides everything starting from fans, washing machines, hand-held power tools, traction control system, automotive window lift to the industrial devices. Without a controller system, a motor application is not fully completed. Control system became easier after the invention of microcontroller and microprocessor. The main responsibility of the control system is to control the speed, switch, and direction of the motor. By connecting the switch directly to the control circuit, a control signal is being generated. For controlling and monitoring the motor, a user should be present at the point where the switch is placed. In this project, as a control switch, the mobile phone has been used. By sending an SMS, which is basically the part of GSM (Global System for Mobile Communications).

A control signal is being sent wirelessly to control circuit. After the implementation of GSM module on the motor control circuit, it enables the user to the send SMS that contains the instruction from any of the mobile to the GSM module. Now, this instruction will be received by the GSM module and it will be then sent to the microcontroller for further processing and then converting it into the desired control signal.

A motor controlling using SMS application is an easy and convenient way for enabling the user to monitor and control the motor from anywhere if coverage is available to those places. However, sending SMS is being considered at a low price and most people have their phones as it has become one of the necessities of today’s life.

As GSM has become a popular network, GSM terminal equipment is not used only in the typical voice communications but also in the applied control area. By showing some GSM-based typical applications and cellular engine of Siemen, TC35 were introduced. In such developed system, advanced MCU and GSM technique was used with a low cost. It can also be used in remote access control with good security value applications.

One of the applications of GSM is to control the greenhouse climate perimeter. The basic purpose of this system was to control the parameters of climate which influence the production in a greenhouse, for example, relative humidity of air, temperature and soil moisture. In this system, farmers can control and monitor greenhouses from distance. They can also monitor climate status of the greenhouse without any time constraints for humidity and temperature and can control the parameters such as heater, vent, and fan.

In general, applied voltage is directly proportional to the rotational speed of the DC motor, and current is proportional to the torque. By resistors, variable voltage source speed control can be achieved. To change the direction of the wound field of DC motor, either reverse the field or armature connections. This is done by using a special set of contractors i.e. direction contractors. By inserting electronically controlled switches, a device made of transistors, thyristors or a series resistor, the effective voltage can be varied effectively. There’s a circuit known as “Chopper”, in which when an average voltage is applied to the motor varies with the switching voltage supply. The motor speed varies as the “on” to “off” ratio is varied for changing the average applied voltage.

The user will send an SMS of desired motor speed in rotations per minute RPM format to the GSM Module. The GSM module will receive the SMS. MCU PIC16F877A will request the data from the GSM Module and process the speed. The speed sends by the user will be processed and convert to the suitable duty cycle for PWM pulse so that the output voltage of 12 V power supply can produce the desired motor speed. When the switch is turned on the DC motor will run on 50% of the duty cycle. The MCU is programmed to continue to send an AT command to the GSM Module to check for a message in the SIM every 5 seconds in the Location 1. If the message is received, the program will go to the next step. The next step is MCU will receive the SMS, extract the speed and change it to a suitable duty cycle for the PWM. After that PWM pulse that produced will control the motor drive L293D to produce a suitable voltage to be supplied to the motor so that desired speed is achieved. After completing this step, the MCU will send an AT command to delete the message in the Location 1 of the GSM Module and loop back to the first step. 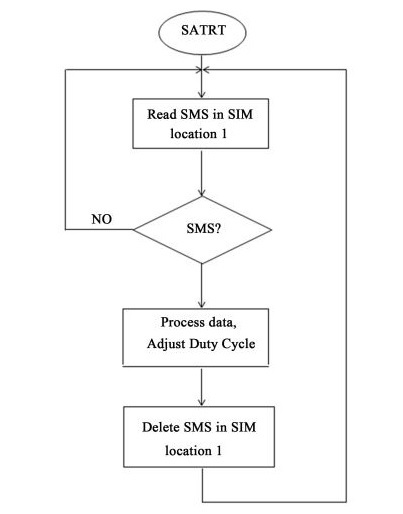 It has been noticed that to control a motor using SMS applications has several advantages. The speed of the motor can be controlled by giving instruction to MCU and in a result, manual work will be reduced. By using this technology, the cost of wiring will be saved. As far as implementing this project is concerned, it becomes easy because a motor is controlled by PWM which further can be modified with dual H Bridge driver and then coding the cycle in order to accept the desired speed. It is also recommended to implement in homes and industries. This is an effective method for controlling the speed of DC motor from far distance wirelessly.