As discussed earlier, MSP43052553 microcontroller  has two 8 bit ports Port1 and Port 2 . The pins P2.6 and P2.7 of Port 2 are also used for connecting the 32Khz crystal oscillator, So if you are using an external crystal, pins P2.6 and P2.7 will become unavailable and you cannot use them as a digital input or output.  So now lets see how to use GPIOs or general purpose input outputs pins of MSP430G2 launch pad.

The pins on the MSP430G2 LaunchPad can be configured  either inputs or outputs Now I will explains the functioning of the pins in those modes. Digital pins can be used either as INPUT or OUTPUT. Changing a pin from INPUT TO OUTPUT with pinMode() drastically changes the electrical behavior of the pin. So now lets see how declare these pins either as a input or output using Energia IDE. If you don’t know how to use Energia IDE. I recommend you to use fist tutorial on MSP430G2 LaunchPad.

So now lets take two examples to see How to use these pins as digital output for example LED blinking and second example of push button interfacing with MSP430G2 launchPad where it Input output pins will be used as a digital input.

Now I will show you, how to program MSP430 launchpad to blink an LED using Energia IDE.  As explained earlier MSP430G2 launchpad have 16 GPIO pins and we can use any pin as a digital output pin.  pinmode function is used to initialize GPIO pins either as an input or output.  First argument to the pinMode function is a pin number to which we want to declare as a digital output and second argument is type either OUTPUT or INPUT. Because same function is used to declare I/O pins as a output or input.

We initialize everything inside a setup function. DigitalWrite function is used to make pin low or high and it is always written inside the loop function because we want to perform this action again and again. This line will make the pin number 14 high.

This line will make the pin number 14 low

Now lets see how to make circuit diagram of LED blinking program we will need one LED and one 220 ohm resistor. Now pause the reading and Make the circuit connections according to this circuit diagram. 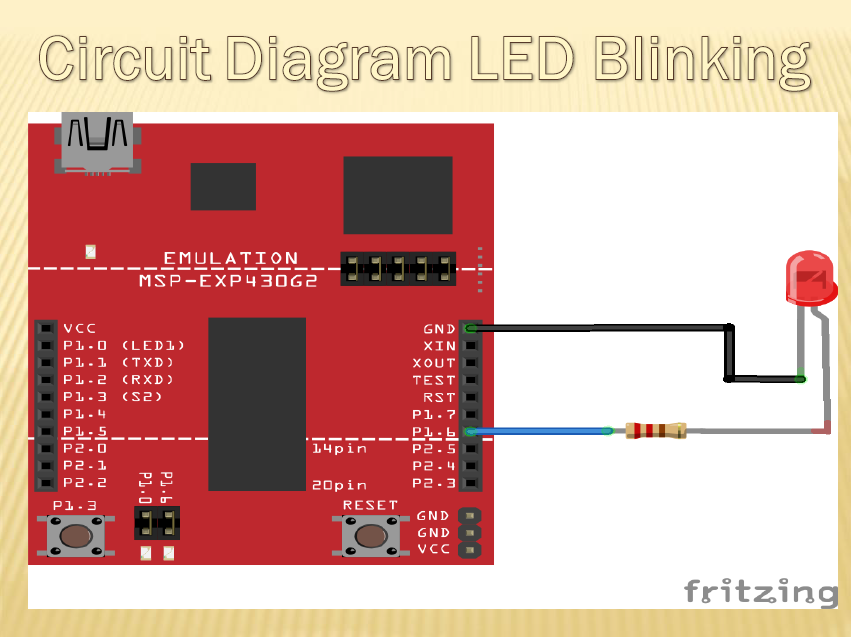 How to write code of LED blinking using MSP430G2 launchPad

Now lets see how to write code for LED blinking and how code works. In the program everything starts with double back slash are comments and just for readability of the code.  In the program , the first thing you do is to initialize the pin to which led is connected. This line assign a name to pin number 14 of MSP430 “ LEDPIN”

This line initialize the led pin as a output pin

In the main loop, you turn the LED on with the line:

This supplies 3 volts to pin 14. That creates a voltage difference across the pins of the LED, and lights it up. Then you turn it off with the line:

That takes pin 14 back to 0 volts, and turns the LED off. In between the on and the off, you want enough time for a person to see the change, so the delay() commands tell the MSP430 to do nothing for 1000 milliseconds, or one second. When you use the delay() command, nothing else happens for that amount of time.

How to use push button with MSP430G2 Launchpad 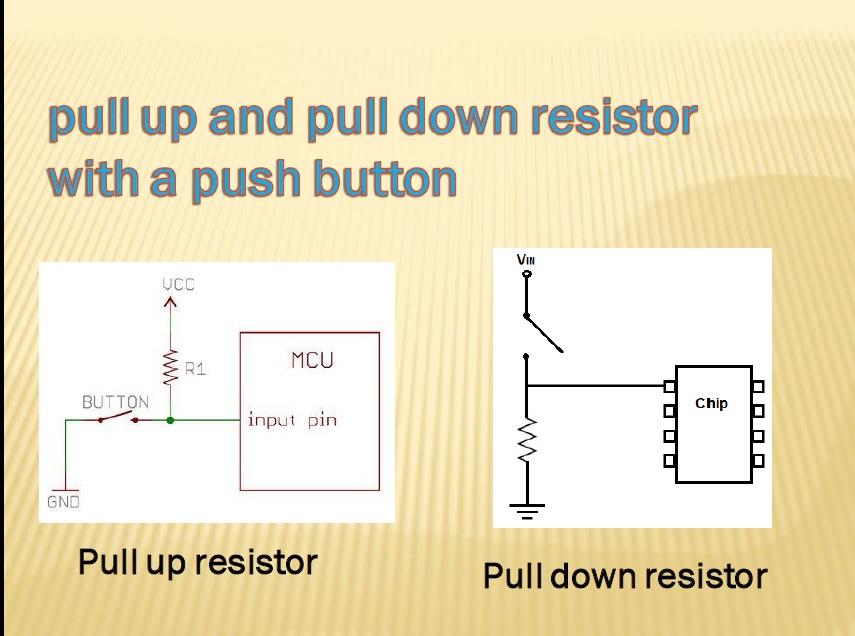 Now Lets see how to make a circuit of push button interfacing with MSP430. Now pause to read and make connections according to this circuit diagram.

Push buttons or switches connect two points in a circuit when you press them. When the pushbutton is open (unpressed) there is no connection between the two legs of the push button, so the pin is connected to VCC (through the pull-up resistor) and reads as HIGH, or 1. When the button is closed (pressed), it makes a connection between its two legs, connecting the pin to ground, so that the pin reads as LOW, or 0. So when the push button is not pressed, we will be getting 3.3 volt or logic high signal on pin number 14 through push pull resistor and when push button is pressed, we will get logic low signal on pin number 14. Also LED is connect with pin number 14 through a current limiting resistor.

How to write code for Push button interfacing with MSP430G2 LaunchPad

In first line we have give name to pin number 5 as push button now instead of pin number 5  we will using pushbutton through the program and similarly ledpin name is given to pin number 14. Another integer variable button state is declared which is used to store the state of push button. Inside the setup function we have initialized pushbutton as an input and ledpin as an output through pin mode function.

After that button state is used to turn on or turn off LED.