IOT (Internet of Things) based smart energy meter is a type of energy meter that not only shift the consumer supply form one grid station to another grid station automatically, although also calculate the cost of their consumed energy. Beside this, it also gives the intimation to energy supply company during any energy theft condition. This whole work is done by this IOT based smart energy meter though internet browsing. Every energy company provides energy hundred and thousands of consumers through intermediate controlled grid station which are specified for a certain area. Sometimes the supply of this energy, to gird station is switched off or failed due to any emergency condition such as short circuiting or transmission line repairing then the whole area which relates to this grid station is affected. Beside this, when someone is theft energy then supply company is totally unaware from this situation.

Here is the block diagram of IOB smart energy Meter with all their essential components, 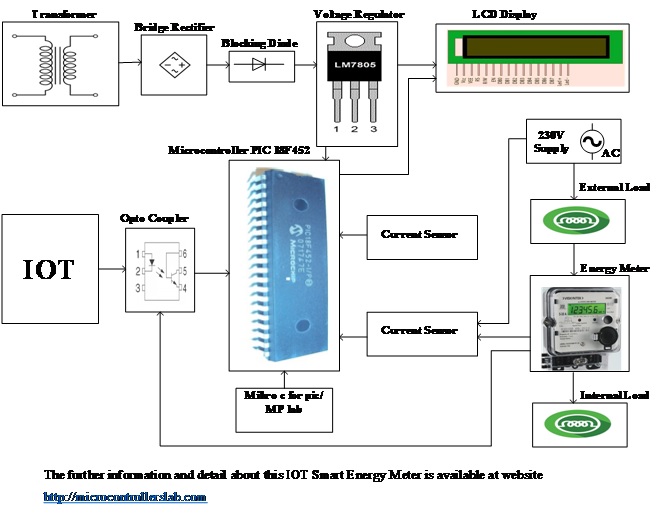 This IOT smart energy meter is directly coupled with 230V ac supply in series with the consumer load and two grid stations. Because this smart meter mostly consists of electronic components therefore 230V AC voltages are stepped down to 6 or 9V ac with the help of step down transformer. After that, these ac voltages are converted into dc through bridge rectifier and then these are regulated to 5V dc though voltage regulator. Microcontroller and LCD display are powered up with this voltage regulator. Microcontroller is the main controller of this IOT smart energy meter. It is programmed in c language with the help of mikro/c software and is interfaced with current sensor, IOT device and LCD display. For the demonstration purpose we have connected two bulbs at output of IOT smart energy meter and this meter relates to two different grid stations.