What is LIN Communication Protocol? The word LIN stands for local interconnect network. It is advanced form of a network that has been currently used in automotive sectors. If we talk about previous network in automotive sector, then it was full of mechanically components but now it has been replaced with intelligent mechatronics system. Because this system consists of lot of wires and communication components therefore it is not so much easy to handle these components. But LIN communication protocols have made this so much easy with the help of a single bus bar and this bus bar is called LIN bus bar. This bus bar is a single master or multiple slave bus that transmit data with the help of single wire. It consists of a sub system that based on a serial communication protocol and is invented to be used for simple switching applications such as door locks, sun roofs, rain sensors, car seats, mirrors and steering wheels etc. The simple LIN communication protocol bus is shown in figure 1 in which LIN communication bus bar is controlling different part of the vehicle.  It has many applications in embedded systems projects.

LIN protocol is a serial wired communication protocol for electronic devices which consist of one master and one or more slaves, but it does support multiples slaves. For starting or receiving data to LIN bus, LIN master uses different predefined scheduling tables and these scheduling tables have different relative timing when data send time is start. Each data consist of LIN frames and every LIN frames consists of two pairs such as header and response. LIN master always sent data to header pair, then header pair sent data to response pair and response pair sent this either to dedicated slave or LIN master. This data is sent with in LIN in the form of eight bytes, in which one start bit and one stope bit is also involved. The timing of this data is set by LIN master through clock source and the smallest time of one-bit is 52 micro second @ 19.2Kbits/s.

The working of a LIN bus is very simple. Every LIN system consists of a one master LIN bus device and multiple slave devices which are interconnected with each other. Every slave has a single task to perform but all these tasks are totally controlled though master LIN bus device. The message which is transfer from LIN bus device to slave deice is called message frame and it is divided into message header and message frame. Message header which always sent the message from master node to slave, it consists of three different fields such as break, synchronization (Sync) and identifier (ID). Similarly, the message response which always receive the message which is sent by master node, it consists of two different fields such as data and checksum. The block diagram of LIN message frame is shown in figure 2

For stating communication when message is sent from master LIN bus device to message header then break field check number of bits this data which comprises this data into 13 dominant bits. Then Sync field synchronize this data means it defined this data into x55 character and allows the slave device to automatic set the baud rate of this data. After that the ID field which is final field of message header. It provides the identification of each message on network and finely decided whose slave node would be responded on this data or message. Similarly, the Data field in message response checks this data, convert it into zero to eight bytes and then send it to slave bus. The checksum field checks the algorithms of this data and finally send this data to slave bus.

The specification of LIN 2.0 is further classified into six LIN frames.

Every LIN system consists of a one master and one or more LIN slaves. If we take example of an automotive industry, then LIN bus is connected between smart sensor and electronic control unit (ECU) in which CAN bus use as a gate way. Block diagram of this vehicle LIN system is shown in figure 3. this system has made with the help of three microcontrollers 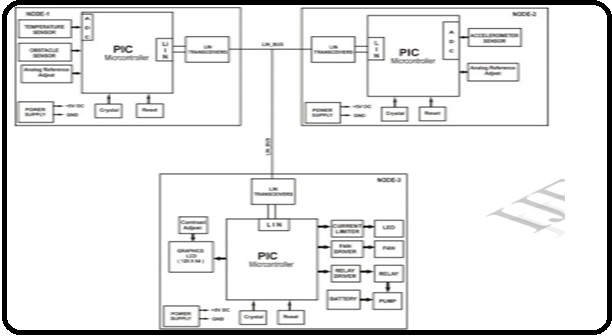 LIN system is mostly used in advanced automotive industry therefore here we will explain its application when it is controlling different parts of the vehicle.