LPC2148 microcontroller has developed by Philips (NPX semiconductor) company It has so many built-in peripherals and features. Therefore it has become so efficient and reliable as compared to other microcontrollers. It is 16 bit or 32 bit ARM 7 based microcontroller which as different features. 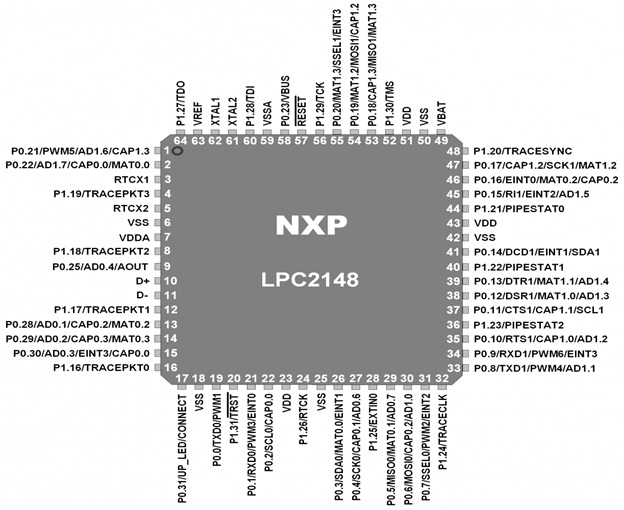 Pin1 (P0.21/PWM5/AD1.6/Cap1.3): It is a general-purpose pin and it could be used for four multiple ways such as it could be as input output data pin, as a pulse width modulation generator, as an analog to digital converter and as a capture input for timer l channel 3.

Pin7(VDDA): This pin is used as voltage source pin with 3.3 Volts. These voltages could be useful for on chip digital to analog converter and analog to digital converter.

Pin8(P1.18/TRACEPKT2): This pin is used as GPIO pin and 2 bit input output pin for inner pull up.

Pin12(P1.7/TRACEPKT1): This pin is used as a GPIO pin and as a standard input/output port for inner pull up.

Pin(22,24,26,27,28,29,30): These are GPIO pins. Pin22 is used as clock input output and capture input pin, pin 24 is used as CLK output during JATG interface. Pin 26 is used as matched output for timer 0 channel 0 and as external interrupt for input1.Pin 27 is used as a serial clock for transferring data from master bus to slave bus and as a digital  converter ADC-0.6 for input 6. Pin 28 could be used as external trigger input with inner pullup. Pin 29 is used as MISO for transferring data form mater to slave bus and used as a converter ADC-0 with input 7.Pin 30 is also used as MISO output and as a capture input for timer 0 channel 2.

Pin(23,43,51): These pins are used for suppling  input voltages to internal core  and input output ports.

Pin(31,32,33): These pins are used as GPIO pins. Pin 31 is used as SSEL0,PWM2 and as external interrupt for input 2.Pin 32 is used as a trace CLK for standard input output port with inner pull up. Similarly, pin 33 is used as transmitter TXD1 for UART1 and as a pulse width modulator PWM4

So, the remaining pins of this LPC 2148 microcontroller are work same as explained pins.