In this tutorial, you will learn what is real time operating system or what is RTOS?  What are the applications of RTOS?  Real time operating systems are used real time systems where time or temporal correctness is as important as logical correctness of a program. For example if you are running program and program consists of four tasks. Each task should be complete in one mili second. Assume that each task produces logically correct output without any time constraint. If we run the program and these four tasks produce correct logical output without taking the consideration of their completion time. Then the completion of these tasks without time constraint is not real time system. But if you want strict condition on the execution time of these four tasks as well as logical correctness. Then this system is called real time system. You may like to read this guide:

If a real time system fails to meet its deadline it may have severe consequences. Since there is only one microcontroller performing many tasks of varied importance, it is important to determine task deadlines and their relative importance in the system. This leads us to the concept of priority.Priority determines the importance of a task in a system. In a real time system, every task has an assigned priority. The higher the priority, the better is the chance of the task executing on microcontroller and meeting its deadline.How does priority help the coherent functioning of the system? Using priorities of each task in a system, we can devise a scheme that allows coherent operation of a system.

Which authority decides that what task should run at what time? That is the job of scheduler. It lines up tasks in accordance with their priority. It works as an arbitrator. At any given time, it decides which task should perform its job and which task should be paused. Thus, in effect, the scheduler in real time system maintains a ranked list according to the priorities of all the tasks in system and by the means of preemption, the scheduler enforces the ranked list by allowing or disallowing any particular task to perform its job at any given time. Hence the typical scheme employed for scheduler in real time system is called Priority based Preemptive Scheduling Scheme. For more details about the types of schedulers check following links:

An operating system is system software that makes the computer hardware to function. It makes the computer hardware to function and makes it useful to users. Before any other task is accomplished, it needs to be loaded.An Operating System provides interface between computer and computer user. It manages the use and implementation of applications software. Various roles are performed by an operating system, that include operating CPU, controlling I/O devices, handling the working of application programs with hardware and other system softwares and managing and retrieving information. Few popular Operating Systems are MS-DOS, Windows XP, Windows 2000, Windows Server 2003, UNIX and LINUX.

A Real Time Operating System is the type of operating system that is designed to serve real time applications or embedded applications. It is necessarily able to process input data without any delay. The measure of processing time requirements is in tenths of seconds or shorter. The basic structure of RTOS is similar to general purpose operating system. In addition to that it provides mechanisms to allow real time scheduling of tasks. Some examples of real time systems include MTOS, Lynx and RTX. In real life scenerio examples like controlling traffic signals or a nuclear reactor or an aircraft.The figure shows the embedded system with RTOS. 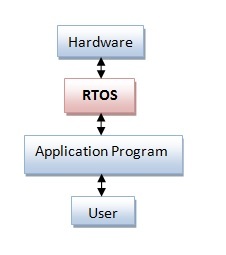 RTOS has vast applications in most of the technological areas, right from fuel injection system to nuclear reactor control, satellite control, global positioning systems, and fully equipped high-tech warfare aircrafts. And the best is yet to come!