TDA2030 is an audio amplifier which provides an output power of 14 Watts. It has internal protection system against short-circuits and overloads which limits the dissipated power. It is basically designed for use in applications requiring a class AB amplifier of a low frequency. TDA2030 audio amplifier amplifies the audible signals from any audio device for example microphone by enhancing its volume when that sound is played on a speaker.

Pinout diagram is very simple and it contains only five pins. 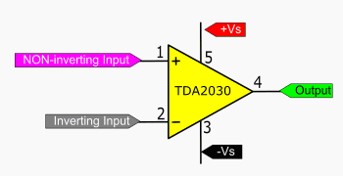 Due to its small size, minimum cost and the feature of providing output power from 10 to 200 watts, this IC would be best for designing audio amplifier circuits. In addition to that, it can perform a stable operation and has good input sensitivity. If you are designing a high-volume system, bridge amplifier or a booster amplifier with the above-mentioned features, then using TDA2030 will be a good choice as it is easy to use.

How to use a TDA2030 Audio Amplifier?

The operation of this IC is similar to other general operational amplifiers. The only difference is that it amplifies audio signals. It produces an output power of 14 watts but its power can be increased up to 30 W by using two IC’s. A simple application circuit of this IC is given below. 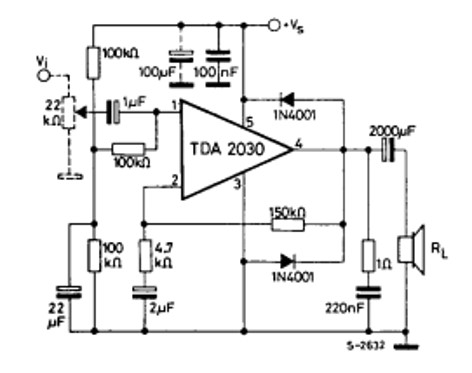 This capacitor is used to allow the amplified output signal to the speaker which in turn will produce the high volume sound. The two diodes are used to protect the IC from burning by preventing interchanges of polarities of TDA2030IC. A potentiometer of 22 kΩ is connected at the non-inverting input. It is used to change the volume of the speaker. BY supplying the circuit with power supply, an amplified signal is obtained at the output whose volume can be adjusted through a potentiometer.  You can connect an audio jack at Vi. Connect this jack with a mobile phone or any other audio device and you can enjoy your music.

These are the tda2030 equivalent ICs.

It is available in the TO220 package consisting of 5 pins. The 2D model of this IC along with dimensions is given below: 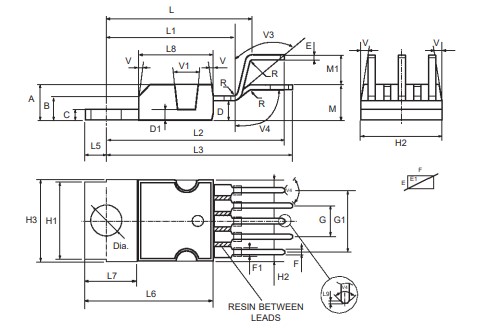