TLE4999I3 is a linear hall effect sensor that adjusts its output on the basis of whether a magnetic field exists or not. It generates an output signal depending on the magnetic field density around it. If the magnetic flow density around it reaches a certain pre-set threshold value, the sensor senses the magnetic field and produces an output voltage often referred to as the Hall voltage. It has a wide range of applications due to its versatility in automotive systems, smartwatches, computers, and many others. One of these Hall sensors in TLE4999I3. This article explains the working and operation of TLE4999I3 in detail.

TLE4999I3 is a monolithically integrated linear hall sensor developed by Infineon Technologies. It is the world’s first Hall sensor that satisfies ISO26262 safety standards. Moreover,  it consists of two sensors integrated inside a single package with the PSI5 interface. Furthermore,  it can set two magnetic ranges of ±12.5 mT and 25 mT which are very low values. You can achieve them using small and cheap magnets easily. 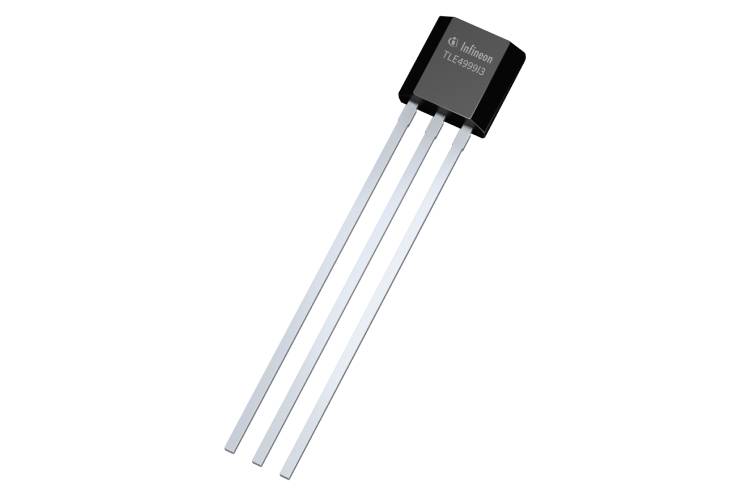 It comes in a three-pin package. The three pins are:

It is either connected to voltage supply or used as an output pin in the case of the PSI5 interface.

It is a dual-channel sensor that provides two redundant measurement paths and fulfills all the safety requirements for ASIL D (Automotive Safety Integrity Level). It also satisfies the ISO26262 standards. Due to these two reasons, it is well suited for safety-critical applications. This dual-channel sensor is resistant to temperature, vibrations, and humidity and therefore serves as a replacement for potentiometers. It is suitable for systems where you need long-range cable connections for the control unit. If you are looking for a hall sensor with the above features that can operate at a higher temperature, then you can use this sensor.

How to use Hall Effect Sensor?

It consists of two Hall sensors main and sub on this monolithically integrated chip. These two sensors produce measurement channels, each having its own independent channel which is programable. They have independent and separate analog supplies controlled by regulators of main and sub sensors.

This digital output of this sensor can support SPC, SENT and PSI5 protocols. PSI5 interface supports a 189kbaud bit rate. Figure below shows a simple application circuit using the PSI5 interface. It uses current modulation to transmit data at output. That’s why it requires only two wires for connection.  If you want to use SENT or SPC protocols, then it uses all the three pins and the sensor is operated in open-drain or push-pull configuration. 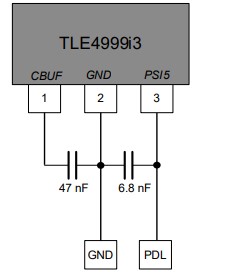 The TLE4999I3 sensor transmits data using the Manchester Encoding scheme which provides synchronization between sensor and receiver and allows efficient detection of bit-error. It provides an uninterrupted operation.

It comes in a PG-SSO-3 package. The figure below shows the two-dimensional diagram of the sensor. 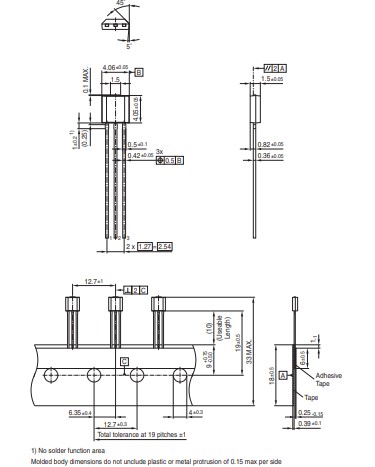