ATMega16 is one of the cheapest and most used microcontrollers due to its multiple pins and feature. It is closest to the ATmega328P but it is smaller in memory size and larger in pins. ATMEL designed ATMega16 by using RSIC CPU and 8-bit CMOS technology which helps it to operate with other TTL/CMOS devices by consuming less power. Its internal structure allows the designer to use the sleep mode, power vs performance methods to use it efficiently by consuming less power. The microcontroller comes in tow packaging and their pins vary at different packages.

The AVR ATmega16 is a low-power CMOS 8-bit microcontroller based on the AVR enhanced RISC architecture. The throughput of AVR ATmega16 is about 1 MIPS per MHz using a single clock per instruction allowing the system designer to optimize power consumption versus processing speed. The AVR has 32 general purpose working registers and a rich instruction set. They are directly connected to the ALU and allow two independent registers to be accessed in one single instruction executed in one clock cycle. Getting started with the Avr microcontroller tutorial helps you to understand real-time examples. Atmel Studio 6 is used for writing c code and generating hex file.

This section consists of pin configuration details and step by step information on each GPIO pin. 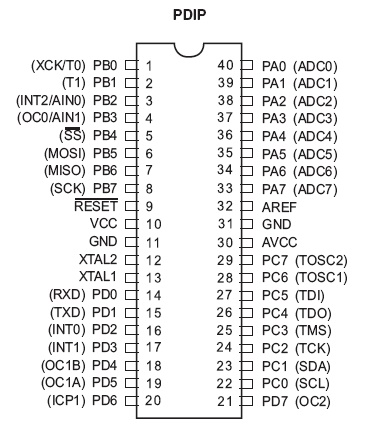 Power: Every microcontroller required power to operate and ATMega16 gives three power pins, one is power input and the remaining two are ground pins, those are internally connected with each other. Those pins in the microcontroller are:

Oscillator: ATMega16 has internal 8 MHz changeable oscillator but to extend the clock speed an external oscillator will be used at the oscillator pins of the microcontroller which are given below:

Digital Input/Output: Input and output is the requirement of each device and micro-controller need these functions to communicate with external devices. In ATMega16 there are four ports (A, B, C & D) which comes with a total of 32 input/output pins. All these pins can be used for any input/output control function with external peripherals. Those pins in ATMega16 are given below:

Interrupt: It is one of the most used functions during variating the high voltages but the basic purpose of this function is to get the attention of CPU. In this microcontroller, there are total three interrupt function which can be used by external modules or by an external button to get the attention of CPU. These pins in ATmega16 are listed below:

I2C: Some sensors and servos come with another serial communication protocol called I2C. To communicate with those peripherals ATMega16 also gives I2C pins interface. One pin is used for data communication and one for a clock. Both pins are listed below:

JTAG: These pins are present in most of the board for testing purposes. The reason for designing the JTAG was to test the device and PCB after the manufacturer has completed the design. JTAG is connected to the internal test port but it can also be used for programming the microcontroller and even the bootloader. JTAG pins in the microcontroller are:

Timer: The microcontroller has three internal timers/counter. They can perform by using the internal oscillator or they can also be operated with oscillators used by the microcontroller, but they also could perform the counter by using their own external oscillator. Two timers are 8-bit and one of 16 pins, only two timers support the external pulse input pins to operate. All timers and oscillator pins for timers are given below:

Analog Comparator: To compare the analog signal a comparator is being used in the microcontroller. The comparator takes the two inputs of the same signal and the input will be in inverting and non-inverting form. After comparing the analog signal internally their output can be used internally or it can be used to perform any other function on the output pins but all of them will be handled by programming. Analog comparator pins in ATMega16 are listed below:

Capture/Compare/PWM: PWM becomes a basic function for most of the devices to control their voltages. In ATMega16 there are four PWM pins that use Prescaler to generate the desired output signal. Those pins are:

Input Capture: ATMega16 can calculate the external impulse pulse duty cycle and frequency. This calculator can be used to perform the further operation. There is only one pin in the microcontroller which could do that, which is listed below:

Analog to Digital Converter: ADC is the requirement of every microcontroller due to the output of multiple modules in analog signal and ATMega16 gives the 8 A/D channels. In the microcontroller, all ADC can be used for analog converter individually but the first analog converter will require external power to act at its AVCC pins. All these pins are given below:

AREF: Analog signal maximum value is decided by the supply voltages which sometimes affect the output because of different voltage levels by the analog output device. To overcome this issue an analog Reference pin will be used, where analog output device voltages will be used to measure the output according to the given voltages. Aref pin in the microcontroller is listed below:

RESET: To reset the microcontroller ATMega16 an external an internal reset is used. An internal reset can be used through programming but to use the external, a low pulse signal will be required.

We used Atmega16 because of the following features:

Port A (PA7-PA0) It is used for analog inputs of A / D. But if A/D converter is not enabled it also serves as a self in 8-bit bi-directional port for input and output. Port pins can provide internal pull-up resistors (selected for each bit).

Port B (PB7-PB0) Port B is used as input/output 8-bit bi-directional port having internal pull- up resistors. The output buffers of Port B are of symmetrical drive characteristics having high sink and source capability. When acting as input pins, Port B pins; if pulled externally low; will source current if the pull-up resistors are activated.

Port C (PC7-PC0) Port C’s special feature is JTAG interface. If the JTAG interface is enabled, the pull-up resistors on pins PC5 (TDI), PC3 (TMS) and PC2 (TCK) will be activated even if a reset occurs. Along with this Port C can also be used as input/output 8-bit bi-directional port having internal pull-up resistors.

Port D (PD7-PD0) Port D serves the functions of various special features of the ATmega16 like interrupts input, timer/counter output and UART. In addition to this Port D is used as input/output 8-bit bi-directional port having internal pull-up resistors.

ATmega16 has the following clock source options, selectable by Flash Fuse bits as shown below. The clock from the selected source is input to the AVR clock generator and routed to the appropriate modules. In device clocking option for External Crystal or Ceramic Resonator combination for bits is 1111 or 1010. For External Low-frequency Crystal it is 1001 and for External RC Oscillator 1000 or 0101. Calibrated Internal RC Oscillator 0100 or 0001 and for External Clock it is 0000. Bit “1” means un-programmed while “0” means programmed.

USART Baud Rate Registers comprises of two registers, UBRRH and UBRRL, i.e. in total 16 bits. The UBRRH Register shares the same I/O location as the UCSRC Register. To cater this bit 15 (URSEL) i.e. Register Select is used. This bit selects between accessing the UBRRH or the UCSRC Register. It is read as zero when reading UBRRH. The URSEL must be zero when writing the UBRRH. Bit 14:12 are reserved bits for future use. For compatibility with future devices, these bits must be written to zero when UBRRH is written. Bits 11-0 contain the USART baud rate. The UBRRH contains the four most significant bits, and the  UBRRL contains the 8  least significant bits of the  USART  baud rate. Ongoing transmissions by the transmitter and receiver will be corrupted if the baud rate is changed. Writing UBRRL will trigger an immediate update of the baud rate Prescaler.

The block diagram of the ATMega16 is given below: 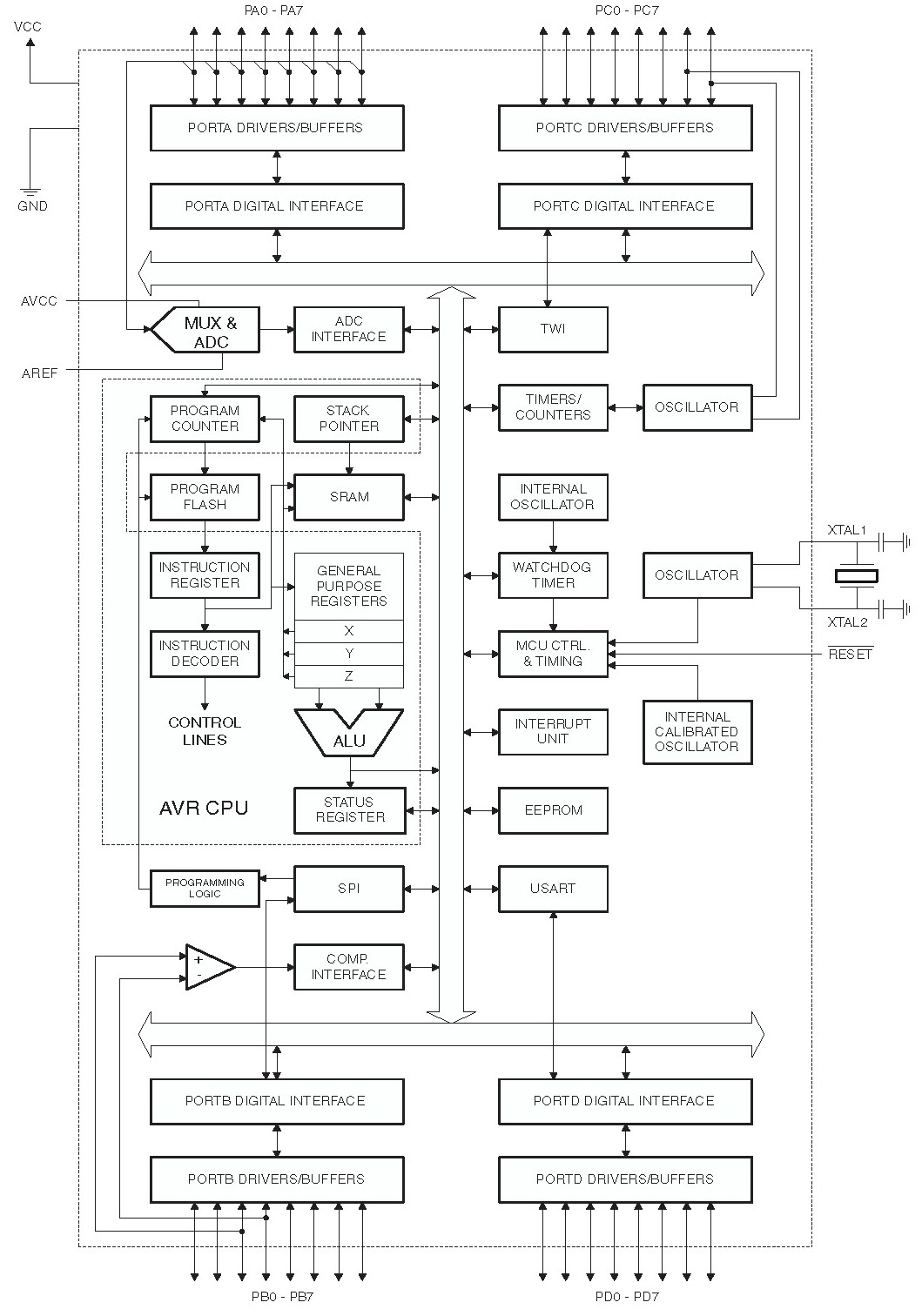 This is a 2D physical dimension diagram for the DIP package. 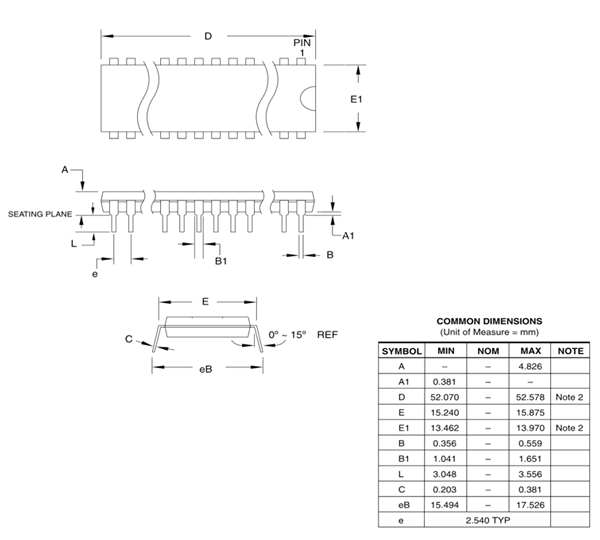