Automatic plant watering system: The purpose of this electronics project is to create an automatic plant watering system which shuts off automatically when the soil has the desired water level. We have already posted a project on automatic irrigation system using pic microcontroller project. We use a basic concept in this circuit. soil has high resistance when it is dry and has very low resistance when it is wet. When the water level goes below a certain level, water pump will start watering the plant until water content in soil reaches a certain threshold value, after which water pump will be switched off. All of this is achieved with the help of two probes in the soil. When the soil is wet, the two probes will be connected through the soil and the pump will In the reverse case when the soil is dry, both the probes will be disconnected and the pump will start pumping the water.

Project Modules and Design Overview is given below:  Following is the Proteus ISIS simulation: 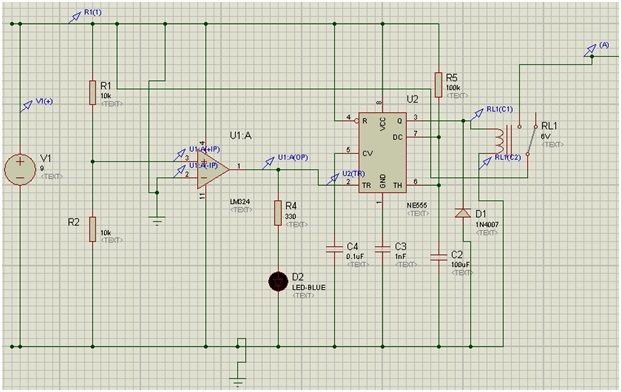 Following is the PCB design:

The main technical issue faced was the detection of voltage from probes. First we used iron nails which caused a great drop in voltage. Then we used copper strips which conduct voltage without drop. Then the second issue was the in the usage of the battery. We connected the battery to the circuit, but it had a very high current rating which the circuit could not endure. The battery gave 1.8A current output while the NE555 timer used could only function till 200mA. We tried to lower the current using a 7809 IC and 7812 IC, but it lowered the current so much that the pump did not turn on, so we had had to use the direct power supply.

So in conclusion, the project was achieved. We learned a lot about relays, comparators and timers after this project and we hope that this will help us a lot in the future. The project could have been improved as sir said that some more components were required to drive the motor properly, but it was a working prototype none the less. This has inspired us to study more about motors and their circuitry, specifically how to drive them properly and how much current they consume.