Introduction and History of the Raspberry Pi Model:

The raspberry pi model is a tiny computer and it has all the features and possibilities just like a normal single board computer. It has all the computer likes peripheral features such as ram, rom, processors, Wi-Fi ports and SD cards. Firstly, it was developed in February 2012 by the raspberry pi foundation in United Kingdom for promoting the teaching level of schools and colleges in developing countries, in the field of computer sciences. The raspberry pi module works just like a computer when the key board, mouse and LCD display are connected with this module. Because these modules are less expensive as compared to the normal computer therefore, in the beginning, these modules were only used in school and colleges in computer science departments for the basic learning about computer sciences such as program learning machine language or c language. But currently, different project has been making by using the different generations of raspberry pi modules. In next paragraph, we would explain deeply about the different generations of raspberry modules. A simple raspberry pi module is shown is figure 1 with peripheral ports.

The first raspberry Pi 1 generation was released in 2012, this generation was very simple and inexpensive but this has different models such as model A, model B and model B+

The Model A of Raspberry Pi 1: This model A has very limited features such it has 256 MB of ram, only one external port and only one USB port. This was developed for embedded and robotics projects because it limited USB and external ports. It has26 general purposes input output(GPIO)pins. This model is very lighter and consume less power. Still this model has been using in that in that project where low power and low weight is paramount such high-altitude ballooning and high-jinks pioneered. Alternatively, this model with wi-fi dongle is very ideal for the users who want to act the raspberry pi as media center behind their television.

The Model B of Raspberry Pi 1: The model B has more feature and ports than model A. It has 512 MB of ram, two USB ports and 100 MB external ports. The user of this model is almost same as model A because it has same GPIO pins.

The Model B+ of Raspberry Pi 1:The model B+ is the final version of the raspberry pi generation 1 and it was developed in July 2015 with the replacement of model B. It has 40 general purposes input output (GPIO) pins the working of first 26 is same as model A and model B. It has 2 USB ports, better hot plug and overcurrent behavior as compared to model A and model B.This model also has micro SD card injected facility, dedicated low noise power supply for audio circuits, neater form factor and consume very low power when it relates to any power supply. The model A model B and model B+ are shown in figure 2 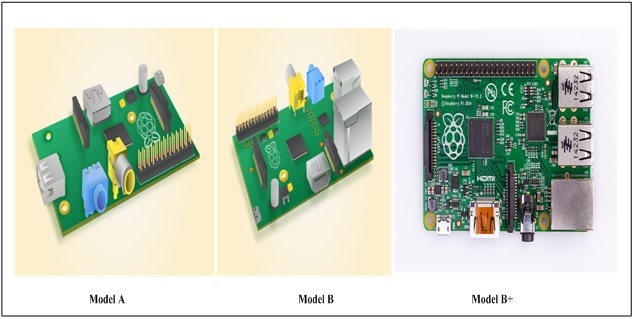 The Model B of Raspberry Pi 2: The raspberry pi 2 model B has so many more features then raspberry pi 1.It has Broadcom BCM 2837 Arm7 quad core processor which could be powered up through single board computer running at frequency 900 MHz It has 1 GB ram which is enough for more powerful and bigger applications. It has footprint a and board layout which is almost same as model B+ of raspberry pi 1. It has fully HAT (hardware attached on top) compatibility. This raspberry pi model also has 40 general purposes input output pins like model B+ of raspberry pi 1. These general purposes input output pins are fully compatible with the raspberry pi 1 model A, B and B+. This model has the camera port and for this purpose the CSI port is used. It has screen display port and for this purpose the DSI port is used. It has the micro SD port for operating our system and storing data. It has 10/100 external port for connecting this raspberry model quickly with the internet. It also has 4 USB ports andthese ports provide 1.2 AMP current for providing the to any hungry USB port because it has very advanced power management system. This raspberry model could be used for create and manage your documents, spreadsheets by using LibreOffice, build your own workstation, time lapses videos, HD audio, GPS tracking, create space programming and enjoying more fast and advanced games.

1 thought on “difference between different Generations of Raspberry Pi Models”