HC06 Bluetooth 2.0 Module is one of the short-range and cheapest communication modules. It consumes very low power and with 2.0 Bluetooth technology. The basic purpose of the module is to establish short-range communication between two microcontrollers and systems. The Bluetooth module mostly uses with Arduino/Microcontroller only in developing projects because the module has all the communication a modern Bluetooth offers. The only problem is the module is to perform the slave functions only. Even it has an internal storage method for the last slave to connect them without any permission or verification. The autoconnection and other methods are changeable through command mode in HC06.

Module HC06 is a slave Bluetooth device that offers serial communication (UART). The module has only communication and power pins. It also didn’t have any indication like other Bluetooth modules have. All the pins of HC06 are:

The module HC06 has a single power-up the pin, which connects with +5V to power up the device.

The module connects with external devices and power supply to operate and to make it happen a common ground is necessary. The GND pin helps to make the common ground.

The communication method in the device is UART and TX pins are for data sending.

This pin helps to receive the data in UART communication with external devices like Arduino or Microcontrollers.

This Bluetooth module is useable with any microcontroller with UART communication. In every device the hardware serial and in most of the device software serial is available. Here you will learn how to use HC06 with Arduino and the same method will help to work with other microcontrollers and even boards. First, connect the module according to the given circuit diagram. Then understand first how the device works. 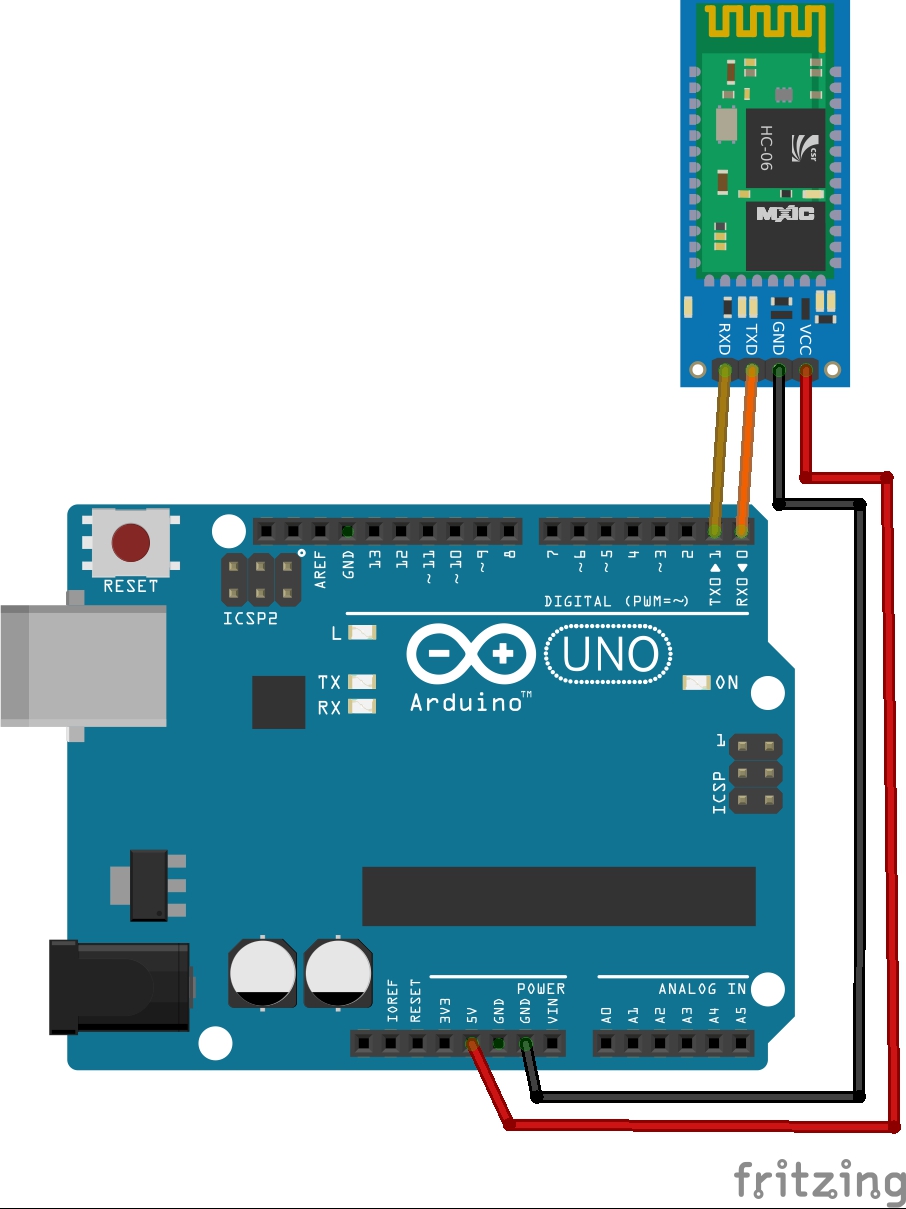 It acts as a slave. Hc06 can connect with external devices just by power on with the use of the password.

BT will start transferring the data to the serial pins and to read them the serial read programming of Arduino/microcontroller will help.

In Arduino, the two methods are helpful to read and write the data serially. The first one is the Hardware serial which is the default method. To use the hardware serial the following code will help.

The first command serial.begin is for initializing the baud rate of communication. The default baud rate of the module HC06 is 9600 but the baud rate is changeable. Every device with UART communication has builtin methods that offer the change in baud rate at specific levels. The second command is serial.available  which is to detect the serial incoming and the last most important is serial.read. The serial.read is for reading the data from the external module. Therefore, always keep in mind to read the data in the byte variable because the data travels between the module are always in bytes. The Serial.write/Serial.print is for sending the data. Any data is spendable using the following command.

There are two methods to send commands. The first one is writing them directly and second is with Serial.print command in COM port of Arduino. just enter the command like the following example:

In some devices the one method works, which depend on one of their module and software versions.

In the above code, the pin 10 will act as RX pin and 11 well as TX. Both pins are changeable. 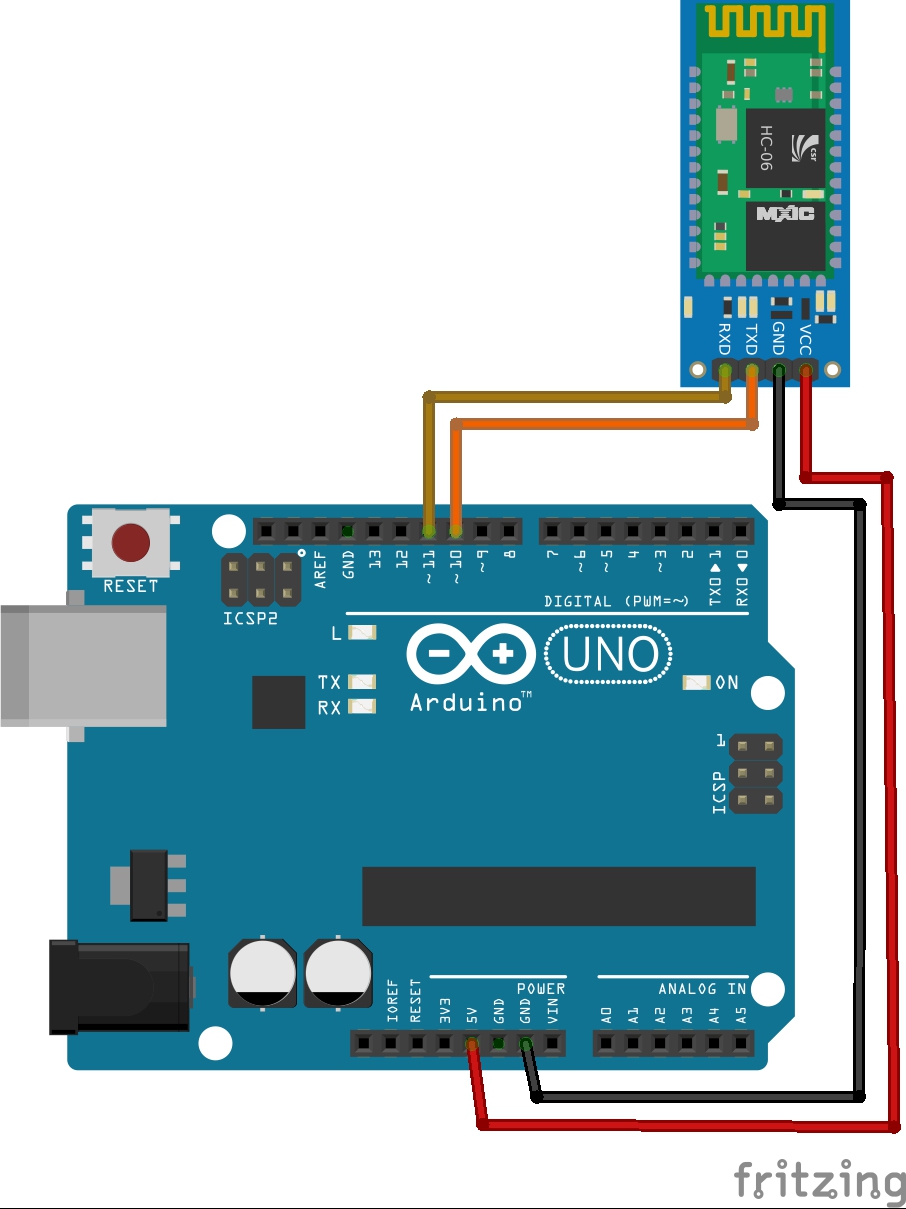 Here we will integrate the Bluetooth for an IoT application. In-home bases, the Bluetooth is useable for room temperate detection. We will use the DHT11 for temperature sensing and HC06 Bluetooth for transmitting the data. The Arduino will perform the basic operations of both devices. Here’s the following circuit. 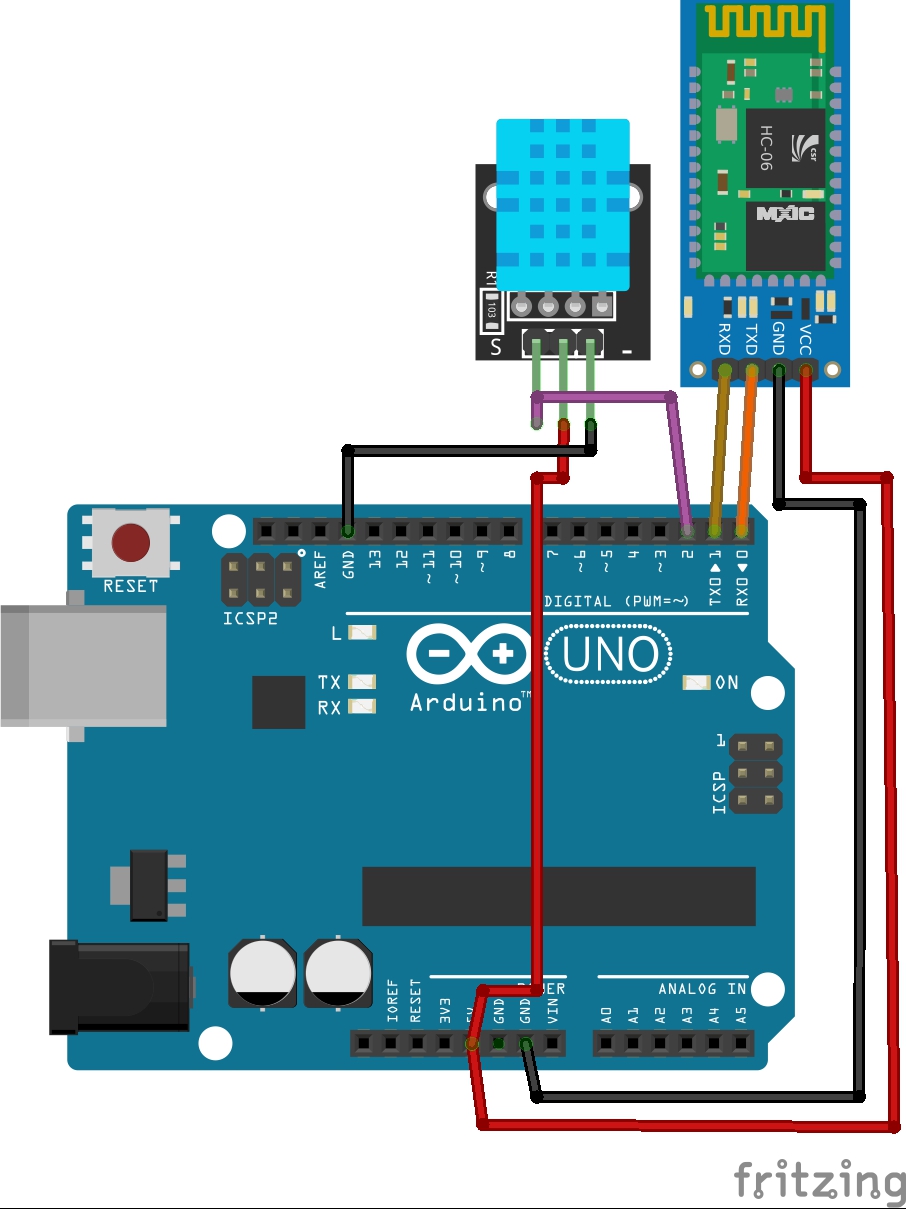 To make it work the Arduino code needs to upload and here’s the code.

The code will take the data from analog input pins and then it will transmit them to the hc06 Bluetooth. The Bluetooth will transmit the data to the Bluetooth receiving device. The receiving device could be anything like a screen, computer or smartphone. Then the broadcast signal is viewable with every second. The code has a limit for temperature increase. In case of an increase in temperature from above 50 degrees, the buzzer will activate to alarm the users.