Today in this article, we are going to introduce you to ULN2803 which is high current as well as high voltage Darlington transistor array. Usually, the chips being used operate on the low-level signals. Some of these chips are CMOS, NMOS, TTL, and PMOS. All these chips operate at either 0 volts or 5 volts thus these are not capable of driving loads of high inductive power. The ULN2803 chips take the low-level signals at input side i.e. TTL and make use of that low-level signal in switching off loads of higher voltage present at the output side. So in this article, we will discuss pin configuration of ULN2803, features as well as specification, how & where to use this and in the last, we will highlight some applications that are developed by using this chip.  You may like to read: 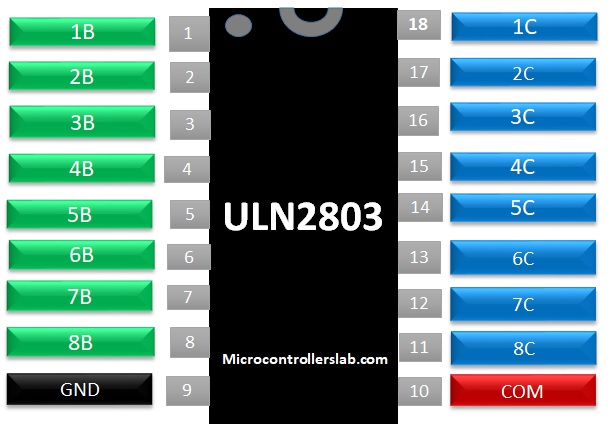 In ULN2803, total numbers of pins are 18. The connection of these pins is as follow:

The specifications, as well as features of ULN2803, are as follow:

The ULN2803 chip can be used in the following cases:

So, these are some of the most important scenarios in which ULN2803 can be used. But here the question arises that how we are going to use this chip. So in order to answer this question we have to look to the internal structure of ULN2803 given below. The each NOT gate present in the figure represents the Darlington transistor setup. 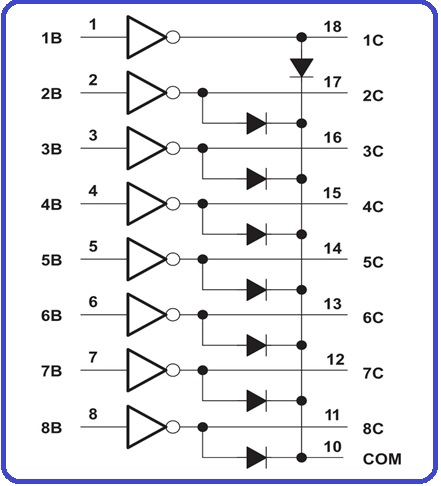 As mentioned above, the ULN2803 chip comprises of 8 Darlington pairs that act as eight individual switches. Out of eight Darlington transistor pair, if we look at an individual pair then we can have something like this:

The simplified Darlington pair can be shown as below: 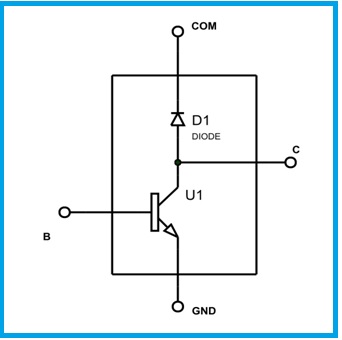 From the above figures, it can be clearly seen that each Darlington pair can be used as the single power transistor. Thus, we can say that in ULN2803, eight power transistors are embedded. For better understanding, let’s look towards another circuit diagram to represent things in more comprehensive way: 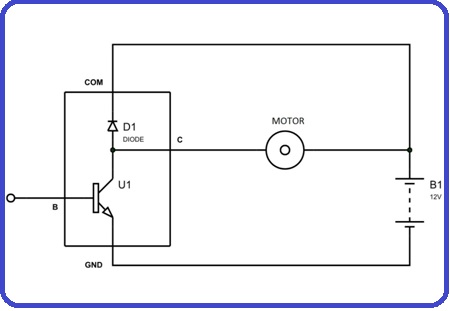 From this figure, it can be clearly seen that among eight transistor pairs, one pair is being used. The COLLECTOR of that Darlington transistor is connected to the motor. As we are already familiar that fly-back diodes are also present in each Darlington transistor thus the positive terminal of the battery is connected to the fly-back diode which is used to provide feedback to the motors’ inductive voltage spikes back to the voltage source. To the negative terminal of the battery, the ground i.e. Emitter is connected.

If we consider the normal situations, across the transistor, the complete voltage will appear whenever a motor will be turned off. However, when the power is supplied to the Base, then the transistor will be in ON state. Whenever the transistor is turned ON, the current will start flowing through the motor via Collector and ultimately it will reach the Emitter i.e. ground and the motor will start rotating depending on the flow of current.

If the power supplied to the Base is grounded, then in this case the transistor will turn off and thus the motor will stop working and in the same way, each Darlington transistor can be used to drive individual loads.

These delays must be considered in order to eliminate errors.

ULN2803 is widely used in the following applications:

So, in this article we looked at the pin layout, specifications & features of ULN2803, how & where to use this ULN2803, a simple circuit along with the explanation that how it is going to work as well as some of its applications. If you have any queries or comments regarding this article, then you can ask in the comment section below.