PIC16F886 is one of the 8-bit microcontroller made by nano-watt technology. It is preferred by most of the developers for experimenting due to its multiple functionalities at a cheap rate. It comes in 28 pins an internal oscillator that can be variate at a specific range through programming. The 16-byte flash memory of this controller is good enough for most of the applications. PIC16F886 comes with auto Power saving modes and watchdog timer which makes the controller more reliable. It also comes in multiple packages that solve multiple circuitry requirements. It also comes with two programming pins on the microcontroller which makes it easy to program.

These features are listed according to the datasheet.

The pin configuration diagram and features of this 8-bit pic microcontrollers are shown here as per datasheet: 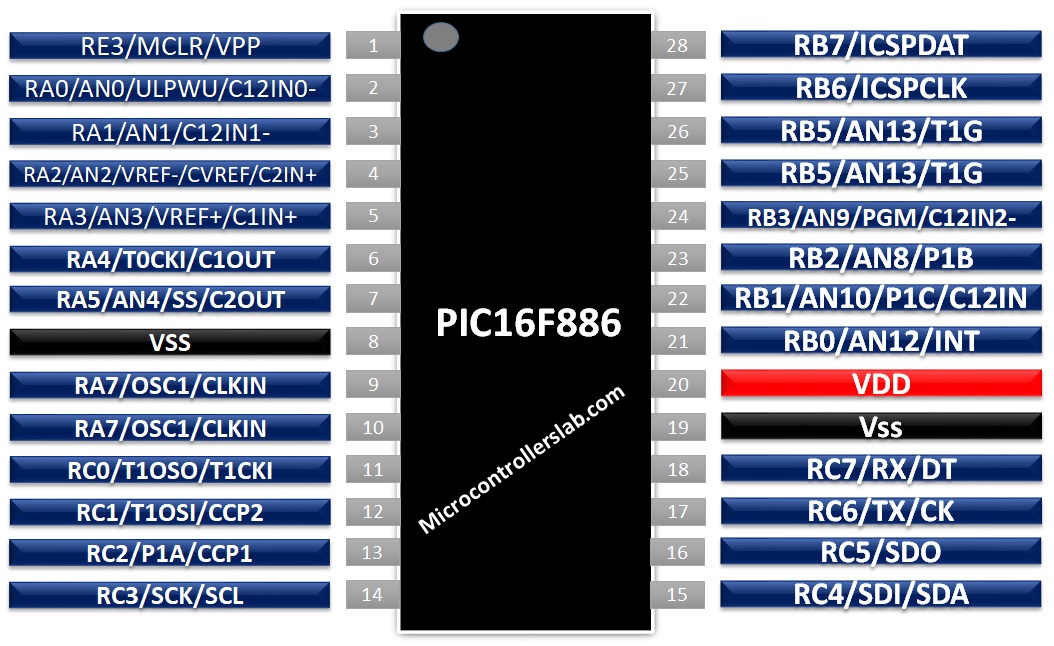 In PIC16F886 except for power pins all pins can be used as an input pin. All 4 ports can be controlled by programming as an input. The input on Port A, C, E will need TTL based input to operate but Port B will only operate with ST based input. List of all 25 input pins of PIC16F886 are given below:

PWN pins are known as a pulse with modulation pins. They are used to control the voltage input of the DC devices. These pins come limited in number due to the multiple registers involved in the microcontroller to generate the PWM. In PIC16F886,  there are 4 PWM pins which are given below:

PGM is used to enable the programming in synchronous serial at low voltage.

This protocol almost follows a bit both SPI and Asynchronous serial communication. It is used in the case of multiple peripheral devices. It comes with two communication lines; one is used for clock signal which generates the start condition of a single peripheral and then that specific device starts to send the data through the data line. The pins for I2C communication are:

PIC16F886 comes with three timers, two of them are 8-bit (Timer0, Timer2) and the third one (Timer1) is a 16-bit timer. Timer1 also has a control pin know as timer gate, used to control the timer from an external pin and Timer2 is controlled from internally. The timer pins of the controller are:

PIC16F886 also comes with an analog to digital converter. It has a 14 analog input that can convert the 14 analog input data signals to a 10-bit digital signal. It also has the ability to convert the input data to digital according to the given voltage reference. The voltage of input analog data and reference voltage should not be exceeded more than the power input range of the microcontroller. The analog pins on PIC16F886 are given below:

PIC16F886 comes with a module that allows the user to control the event according to time. Capture mode allows an event for the peripheral duration of time. Compare mode allows an external event when a specific amount of time has been passed by the controller and PWM is just used to generate the simple PWM signal with respect to time of different frequencies. All these three functionalities come in a single pin and PIC16F886 has two pins of that kind.

In PIC16F886 all input pins can be programmed but those pins require TTL and ST logic to wakeup the microcontroller. When the external pin has low voltage or a chance that voltages can be lower down then a special pin is designed in PIC16F886 to wake up the controller.

PIC16F886 can be reset internally but it also has an external pin that can be used by any other device or button to reset the microcontroller in case of requirement.

Other equivalent microcontrollers are PIC16F882, PIC18F883

The internal block diagram of PIC16F886 is given below: 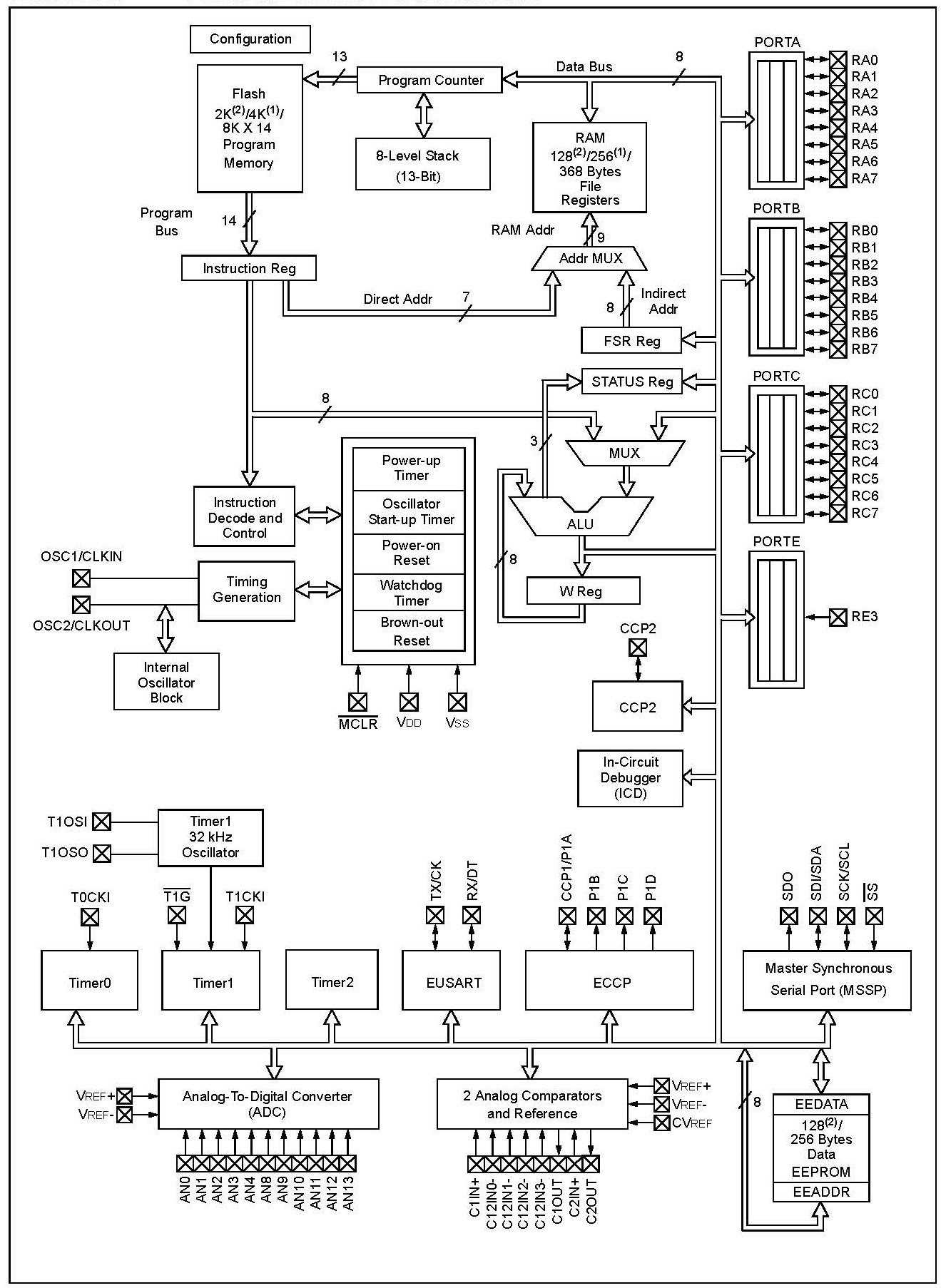 To start learning pic microcontroller programming, you should have a grasp on GPIO pins. Therefore, we have elaborated on all pins and their functions in previous sections. We can use either assembly language or c programming to program microcontrollers.  We suggest you have a look on these getting started tutorials:

To start with programming you need the following software and hardware components:

We will update this section with programming examples in embedded C language in this section.