Introduction to Programmable AC Power Control using Pic Microcontroller: Programmable ac power control using pic microcontroller is a device that controls the ac power strength with the help of keypad which is friendly to use for everyone. Normally, in our daily life we use two types of powers first one is ac (alternating current )power and second one is dc (direct current) power. Both powers are almost same technically, but their strength and control are totally different.  In other words, ac power can be easily controlled directly with the help power electronic components such as MOSFET, BJT or TRIAC etc. but the dc power cannot easily directly control. For controlling it, first, it is converted in to ac power then it is controlled. Because here ,we are only talking about  ac power control therefore, we will only talk about ac power. So, for controlling ac power so many devices have been using in market such as VFDs etc. But their cost is so much high as well as they are not friendly to use. Here we have designed a programmable ac power control device using pic microcontroller. You may also like to check these articles:

This device has made with the help power electronic components such as TRIAC, single phase ac transformer, bridge rectifier, voltage regulator, microcontroller PIC18F452 belongs to pic family, LCD display, single phase load and keypad. This programmable ac power control device is more reliable, more  efficient and less costly as compared to other ac power control devices. Besides this, this device is powered on with single phase ac power, so there is  no need to any extra power supply to power on this device. The block diagram of this programmable ac power control using pic microcontroller device with all their essential components is shown in figure 1.

Here is the block diagram of programmable ac power control using pic microcontroller device with all their essential components, 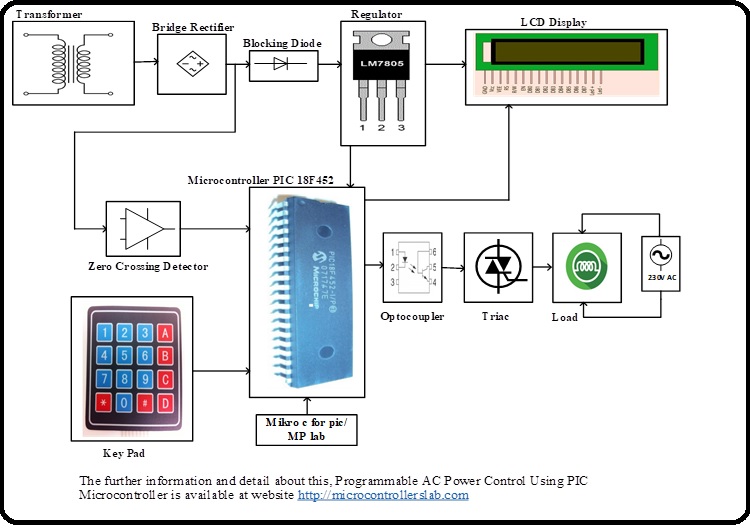 The working principle of this programmable ac power control using pic microcontroller device is very simple, its works on the principle of firing angle change of thyristor which is changed by the user with the help of keypad. Because, this device mostly consists of electronic component such as LCD display ,microcontroller, zero crossing detector and keypad etc. these are operated at 5 volts dc supply.  Therefore, when this device is directly connected with single phase ac supply then these voltages are stepped down to 6 or 9 volts ac with the help of single phase ac transformer then these are converted into dc with the help of bridge rectifier. After that, these voltages are regulated to 5 volts dc through voltage regulator then all electronic components are powered on with the help of these regulated voltages. Here we have used a resistive lamp as an output load for demonstration purposes.