SSL5015TE is a high voltage LED Driver IC. Additionally, it has a high voltage MOSFET within the same chip.  It is designed for driving LED lamps in general mains non-dimmable lighting applications. The SSL5015TE is available in a compact HSO8 package. It has an exposed die pad which is used to enhance the thermal capability for high-power applications, such as for driving 18Watt T-LEDs or higher power lamps.

This high voltage LED driver IC consists of 8 pins. This is a pinout diagram shows the working of each pin. For more information on working on each pin, check this table. 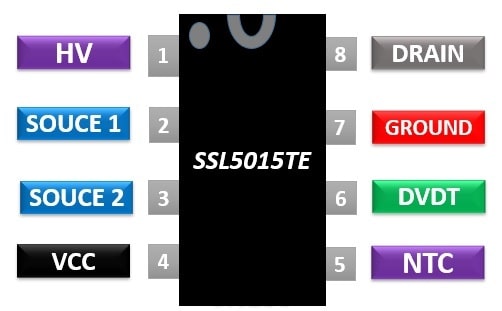 The LED Driver IC SSL5015TE consists of eight pins whose names along with their functionalities are described in the table below:

This IC is designed for input applications requiring 100V(AC) or 120V (AC). It provides a small PCB footprint for a compact solution. The IC requires a minimum number of external components with enhanced power capability. Designers typically configure the IC to a buck converter.

The basic example circuit diagram of this SSL5015TE is shown in the figure below. 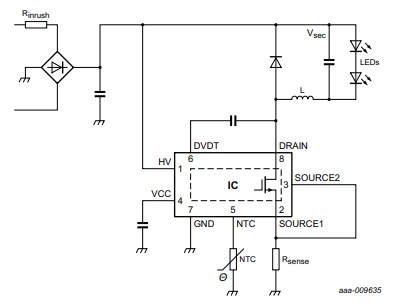 It operates in Boundary Conduction Mode (BCM) with peak current modulation. In converter operation, when the MOSFET is in on state, energy stores in an inductor. The current from the MOSFET drain used in maintaining the stability of the current at the output by providing it as feedback to the sensing elements. RSENSE resistor is connected to the current sensing pin of the IC. This will determine when the MOSFET is turned off.

Pin 5 is the NTC pin that is used to provide thermal protection to the IC. The NTC pin can be used for multiple functions. It controls the output current for thermal protection. Also, it is used for a soft-start function of the IC and is used to dim analog LED light output from 50 % to 100 %. On top of that,  it can also be used for PWM current regulation by connecting it to the digital signal which enables or disables the output signal. It is connected to the NTC resistor for monitoring the temperature of the LED.

The High voltage supply input pin (HV) connects to an internal current source which provides internal power to the IC until either the DVDT supply or VCC pin can provide the power. The over-temperature protection function triggers at a certain IC temperature and the converter stops operating. When the temperature drops down, the IC restarts and resumes the switching operation. That is how safe-restart protection triggers. Similarly, it has mechanisms for Leading-edge blanking, Undervoltage lockout protection, output short protection. 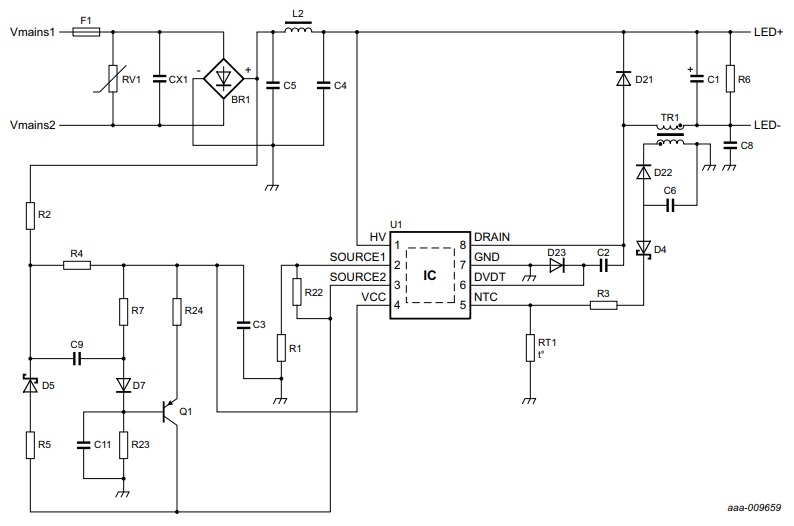 As SSL5015TE IC is an LED driver device that is why it is suitable for mostly driving circuits. Some of its applications are:

This pin is available in 8 pin SOIC packages whose two-dimensional diagram is given below. 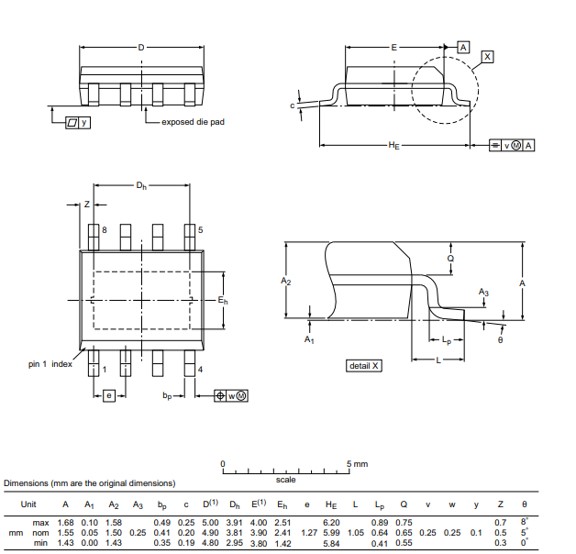