Thyristor Controlled Power for Single Phase Induction Motor:The power control is very significant factor specially in terms of power electronics for transmitting the power to the output load for its good performance. Different techniques or typologies are used for controlling the power by using the semiconductor devices, some of which are used the metal oxide field effect transistor(MOSFET) and some of which are used the bipolar junction transistor(BJT).  Zero crossing detection circuit will be helpful for you in this electronics project. Here we would be control the single-phase motor power by connecting the thyristor at the input side of single phase motor. The power would be controlled by changing the firing angle of thyristor.

This power control topology or technique has high performance and efficiency as compared to the other power control techniques. In this technique, the voltage would be detecting at every precise moment of time and then the thyristor would be triggered at any voltage. By doing this the power can be controlled easily. Here we would be made this thyristor controlled power system with the help of single phase transformer, Bridger rectifier, voltage regulator, semiconductor switch SCR, microcontroller 18F452 which is belongs to pic family, comparatorand optocoupler or opto isolator. 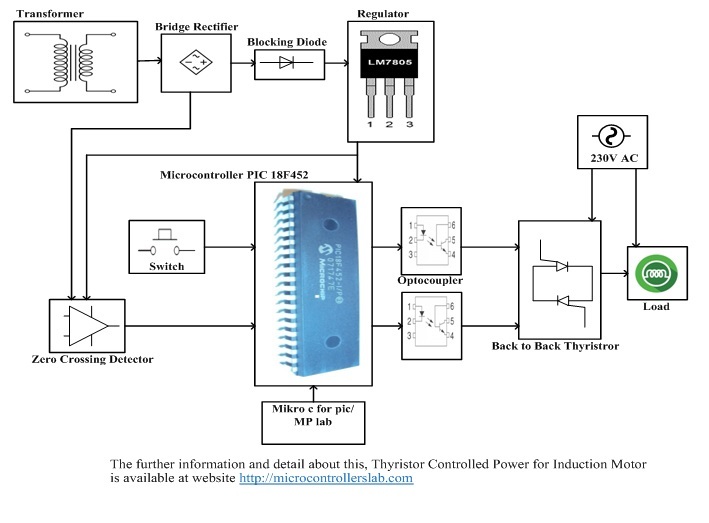 Blocking Diode:In this thyristor, controlled power system the diode is connected at the output of bridge rectifier for blocking the reverse current towards the bridge rectifier.

Voltage Regulator: In this thyristor, controlled power system, the voltage regulator is only used for regulating the 12 dc in 5 v dc for supplying the power to the microcontroller and other electronics components.

Zero Crossing Detector: In this thyristor, controlled power system, the zero-crossing detector is basically a comparator which compares the two inputs one input comes from input side and second is the reference input which comes from maybe variable resistor or output side. When one input is grater then the other input then the comparator output would be high.

Microcontroller pic 18F452: In this thyristor, controlled power system the pic 18F452 microcontroller have been used for controlling the firing angle of the thyristor. This controller is powered up 5 v dc and interfaced with the two optocouplers. It consists of 40 pins and these pins can configure as input or output and one input comes from comparator. It is programmed in c language with help of mikro/c software.

Optocoupler: Optocoupler is a 6 pins integrated circuit device and in this thyristor controlled power system, it used for isolation purposes and for giving the firing angle to the thyristor. The thyristor is make on/off based on the optocoupler firing angel signal.

Thyristor: Thyristor is a semiconductor switch and consists of three terminals anode, cathode and gate. When the positive signal is given to the gate terminal then this thyristor would be in on condition. By changing this gate signal the thyristor can be easily make on or off.

Load:This is basically, the thyristor controlled power system and any type of load can connect at output side. Here we would be check this system by connecting the resistive load means we would be connect here the lamp.