Accelerometer based tilt sensor system is a system that could be used for measuring the tilt, sloping or turning angle of any moving object or thing. We have also posted an another interested project based on acceleromter that is earth quick detection using arduino. The measurements of vehicle acceleration, tilt, sloping or turning angle is very important specially in transport and packing industry. In transport industry such as in aeroplanes, automatic trains and automatic vehicles where each and everything is being worked through these tilt senses, similarly in parking industry grocery items are packed through these sensors.

Here is the block diagram of accelerometer based tilt sensor system using pic microcontroller with all their essential components, 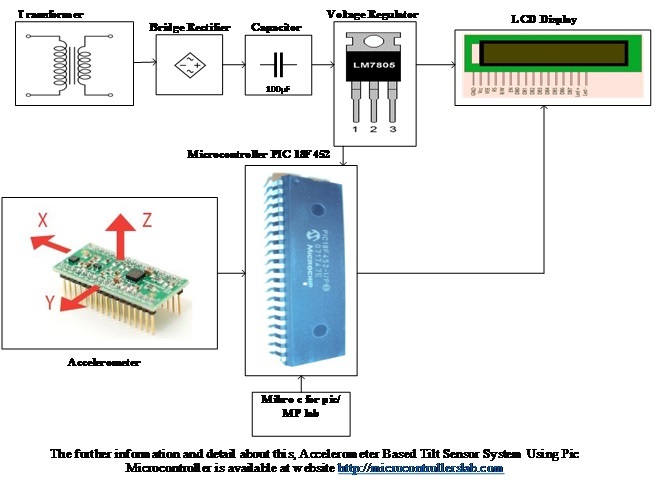 This accelerometer based tilt sensor system is directly powered up with 220 ac supply, because this system mostly consists of electronics components which are operated at 5V dc therefore 220 ac voltages are step down into 12V ac or 6V ac through step down transformer which works on the principle of mutual induction. After step down the ac voltages these are converted into dc through bright rectifier which consists of four diodes. Then these dc voltages are regulated into 5V dc through voltage regulator LM 7805.

After regulating, all the electronics components such as microcontroller, accelerometer device and LCD display are powered up through this voltage regulator. After powered on this system, the accelerometer is fixed at any stationary, vibrating or moving point. Basically, accelerometer is an electromechanical device which is used for measuring the acceleration force of any moving object means the change in velocity of any moving object. When anything such as an object or vehicle is passed in front of this accelerometer then it senses this vehicle or object in three coordinates x, y and z. After sensing these coordinates, it converts it into voltages pulses. These voltages pulses give logic high signal to microcontroller, which is intelligent control of this system.

It is programmed in c language with help of mikro/c software and is interfaced with accelerometer and LCD display. Then this controller displays these coordinate on LCD display in x, y z position after some intelligent process control. By using this system, the user can easy know about the horizontal or vertical position of any respective object or vehicle. This system could be used in different positions from 0 to 90 degrees for measuring the angular position of anything from 0 to 90 degrees. Its installation method is very simple anyone could be installed easily no need of any technical person.