Introduction to Induction Motor: Currently, we have been using two types of motors with respect to its supply voltages, first one is the dc motors which are operated at dc(direct current) voltages and second one is the ac motors or induction motors which are operated at ac (alternating current) voltages. But here we shell only talk about three phase induction motors, which have been widely using in domestic and industrial level applications. These motors are highly efficient , low cost and small in size. It consists of two magnetic circuits which are interlink with each other which are placed in two main parts of machine such as stationary part and moving part. you may like to check these induction motor related projects:

The stationary part is called stator and moving part is called rotor. Power is transferred from stationary part to moving part through electromagnetic induction therefore motor is called electromechanical conversion device and it converts electrical energy into mechanical energy. Rotor is made up with insulated copper or aluminum bars and is fixed at motor frame with the help of bearings. Similarly, the stator is made up with aluminum alloy or welded fabricated sheet and is directly fixed on motor frame in cylindrical shape. When motor is powered up with three phase ac supply then rotating magnetic field is produced with in a stator circuit which induces the emf in rotator. Because the rotor is short circuited through end ring therefor current is produced due to induced emf. So this current, interacts with rotating magnetic field then torque is developed in rotor in the direction of rotating magnetic field. This is the main basic working principle of every induction motor. A simple three phase induction motor is shown in figure 1 with all their essential parts. 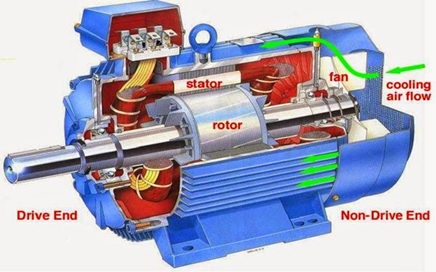 Figure 1 Three Phase Induction Motor with all their Essential Parts

Generally, two types of induction motors are used in our industry such as wound rotor and squirrel cage rotor, but their faults are almost same. Here we have classified these faults in three types, but these are further sub divided.

Electrical Faults : These faults are further sub dived into seven types such as,

Single Phasing Fault: Single phasing fault is occurred when any one phase of supply voltage is getting lost because three phases voltage supply is must require for normal working of three phase induction motor. Due to this fault the motor could be burned or heat up.

Reverse Phase Sequencing Fault: Reverse phase sequencing fault is occurred when any one phase of three phase voltage supply is reversed means the phase order of supply voltages are swapped. Due to this fault the direction of rotation of motor has changed.

Over Load Fault: This fault is occurred when motor is over loaded means the higher load is connected at output side of motor and due to this load motor could be heat up or excessive vibration .

Earth Fault: Earth fault is occurred when any one phase of supply voltages is connected to the housing of the motor then motor is totally shorted. In this condition when any one will touch this motor then he will feel the heavy shock beside this, the motor would take over current that could be dangerous for induction motor.

Inter Turn Short Circuit Fault: Inter turn short circuit fault is the such type of fault when two turns of same phase or different phases are short circuited. During this fault the motor could be totally damaged, or coils of that specific phase could be damaged.

Crawling Fault: Crawling fault is basically an electromechanical fault in three phase induction motor. This fault is occurred when motor is fully loaded with full supply voltages then it does accelerate but it runs nearly one seventh of its synchronous speed. This specific phenomenon of induction motor is called crawling.

Mechanical Faults: Mechanical faults are such types of faults which are generally occurred in internal housing of three phase induction motor. These faults are further sub dived into three types such as,

Broken Rotor Bar Fault: The squirrel cage induction motor consists of rotor bars and shorted end ring. If these bars are damaged or partially cracked, then this type of fault is called rotor broken bar fault. There are so many reasons for occurring this fault, but it has mainly observed that this fault is occurred due to manufacturer defect. Because during brazing process non uniform metallurgical stress may occur in rotor bars which may led the rotor bars failure during the rotation of rotor. Broken rotor bar fault is shown in figure 2 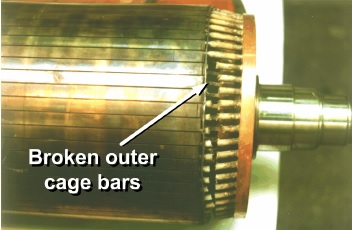 Rotor Mass Unbalance Fault: If we concentrate on the construction of induction motor then we can easily know that the rotor of induction motor is placed inside stator bore and it rotate coaxially with stator. In heavy motors it is centrally aligned with stator and its axis of rotation are also same with the geometrical axis of stator. So the air gap between inner of the stator and outer of the rotor is same. Similarly, if this air gap is not same then the situation which is referred to eccentricity would be occurred. In this eccentricity situation, the rotor fault would be occurred that is called  rotor  unbalanced fault. This rotor mass unbalance fault is shown in figure 3

Bearing Fault: In three phase induction motor two sets of bearings are installed inside of motor housing, for the supporting the motor shaft. The main purposes of these bearings are, to rotate the motor shaft freely and reduce the fiction. They consist of an outer and inner ring which is called races and a set of rolling elements which is called balls. The balls are fixed in an inner and outer side of ring and they reduce the fiction of shaft. The fiction could be further reduced by the lubrication of these balls. Sometime the balls, outer or inner ring of bearing is damaged due to any physical problem then the fault is occurred. This fault is called bearing fault and due to this fault, the motor totally jammed or struck. Motor bearing fault is shown in figure 4