In electrical engineering rectifier is one of the very simple circuit used. The basic purpose of a rectifier is to convert the alternating current (AC) to Direct Current (DC). For the beginners, the definition of AC voltage can be taken as the voltage which changes its direction from positive voltage to negative across same terminal in a specified period of time over and over again. A simple sinusoidal wave is an AC wave. However, DC can be defined as a constant source of voltage which remains either positive or negative through the course of time.

Rectifiers can be classified into two major types

Half wave rectifier is the one which only rectifies (converts to DC) the positive part of the AC voltage and skips the negative part. This rectifier is used very rarely in common practice because of the loss of power due to the wastage of negative part.

A full wave rectifier however uses both the positive and negative parts of the AC wave to rectify. It will pass the positive pat as it is and will invert the negative part of the wave to appear like positive on the load with the help of a bridge as you will see shortly. Along with some filters to remove ripples we can get a perfect DC wave at the output. Due to less power loss and closer resemblance to DC this circuit is used frequently compared to the former one.

Open MATLAB and then open Simulink using the simulink icon on MATLAB as we have been doing in previous tutorials. Create a new blank model and save it in the first hand so you can access it in future. Now, click on the library browser icon on Simulink recently created model. And in the library browsers, search bar write diode as shown in the figure below. Remember that diodes are the main component in any type of rectifier and here we are going to design a full wave rectifier as the half wave rectifier is the simpler one and you can do it on your own. 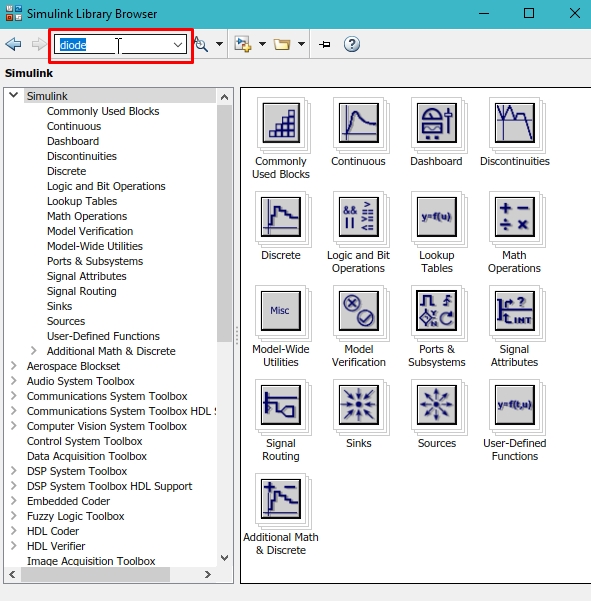 (Hint: Number of diodes to be used will be one)