RFID Based Attendance System: RFID is very popular in electronics and microcontroller based projects. The RFID stands for radio frequency identification. It is the technology that used the smaller computer chip to track the person from some distance almost 300 feet. This chip can carry the 2000 bytes or greater data.  Currently this technology has been used in so many applications. The RFID chip is just insert into the card that is called RF card and this card is assigned to the student or company employ for marking the attendance through this RFID system. You may also like to read about RFID  based electronic lock.

Before this RFID attendance system, the students or employs mark their attendance manually, which was so much time consuming and it was so much difficult to maintain the attendance record. By using this system, the students or employs mark their attendance easily without any time consuming and no need to maintain the record because this system maintain the record automatically. Different companies have been introducing the RFID system by using different types of microcontroller. Here we are introducing the RFID based attendance system with the help of pic microcontroller 18F452, RFID reader, LCD display and status button.

The Block Diagram of RFID Based Attendance System

The Block diagram of RFID based Attendance System is shown below and explanation of all components with their use in this project is also given below. 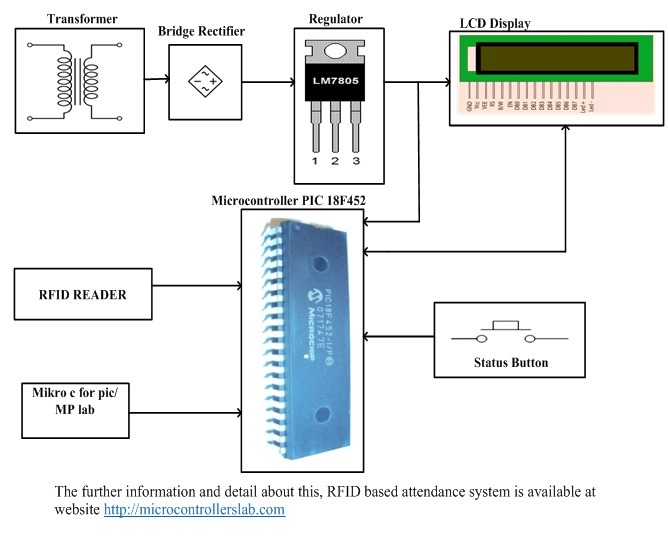 Components List with Detail of RFID Based Attendance System:

For making the RFID based attendance system the following components are required,

Transformer:In RFID based attendance system the transformer is used for step down the ac voltage. Basically, this system is directly connected to the wapda power supply which gives 220 V ac but this system does not operate at 220 V ac. These voltages are step down to 12 V ac with help of this step-down transformer, which consists of two windings primary and secondary.

Bridge Rectifier: This RFID based attendance system consists of electronics components, which are not operated at ac. therefor these voltages are inverted into dc through this bridge rectifier, which consists of four diodes.

Voltage Regulator: In this RFID based attendance system all the electronics components are operated at 5V dc. Therefore, the output of bridge rectifier is regulated 12V dc to 5V dc through this voltage regulator. For this purposes the LM7805 voltage regulator is used here.

LCD Display: In this RFID based attendance system the LCD (Liquid crystal display) display is used for displaying the data or information about RF card scanning employ or student. The LCD display consists of 16 Pins and is powered up with 5V dc. Here the LCD display is interfaced with microcontroller.

RFID Reader: In this RFID based attendance system the RFID reader is a device, which is used for collecting the information or data form RFID card or RFID tag. It is used for individual objects and transfer the data from RFID tag to RFID card reader through radio waves. The RFID reader does not scan all the RFID tags its only scanned the tags which are within this its range and it range is 3 to 300 feet. The RFID technology allows the serval items to be scanned quickly and fast identification of the specific objects.

Advantages and Applications of RFID Based Attendance System: