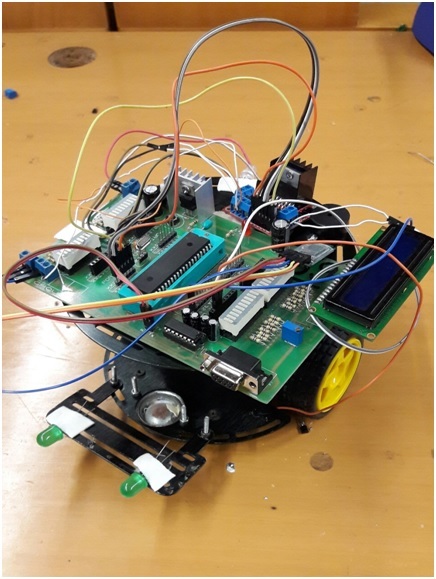 Followings are the main components used in Bluetooth controlled robot and all these components  are very easy to use. I will explain working of each of this components for used in this Bluetooth Controlled Robot. Lets explain them one by one.

Circuit diagram of bluetooth controlled robot is shown below. I have already explained working and function of each component of this robot above. I assume that you have understand all the things about the circuit diagram. we can also used LCD to show movement of robot.But it is optional. The circuit we used was the micro controller. There was a Bluetooth module attached to the Rx and Tx signal of the kit and the L298 PWM module was attached to the kit: 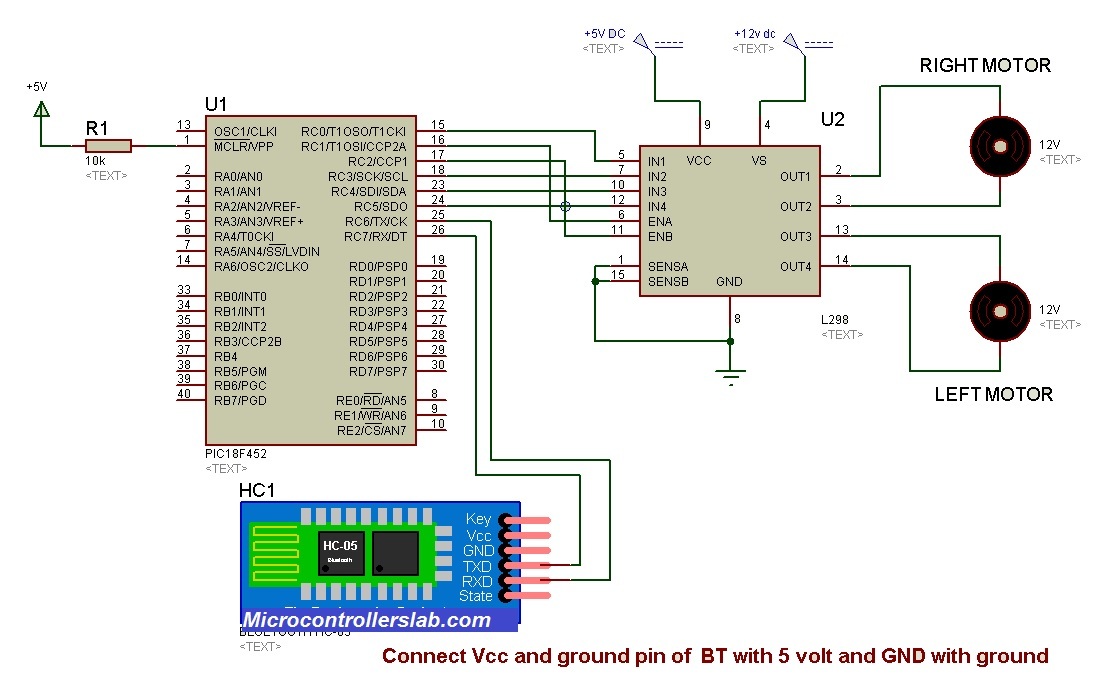 Operating Voltages of all modules are given below:

The user sends a command, either a direction, change of speed, or turning on/off lights/horn, via the Android app interface. The app sends these commands in the form of a single character. HC-05 bluetooth module, received those commands and sends it to the microcontroller. Depending on the command sent, the microcontroller then executes one of the following:

Direction of movement: Microcontroller generates two waves and using PWM, we drive the motors. If the command for forward came, two waves of the same duty cycle are generated and sent to the motors, via L298 motor driver. For Back command, two same waves are sent, but two more inputs that determine the direction of movement are sent to motor driver to then drive the motor. For Forward movements, In1,In3 are set to 1 and In2,In4 are set to 0. For reverse movement, These inputs are reversed, and that reverses the direction of movement of the motor. For moving right, only one wave is sent to the left motor, and right wave is set to zero. For turning left, opposite is done. For moving forward right, forward left, back right, back left, one motor is sent a wave with half the duty cycle of the other, e.g for FR, right motor is half duty cycle in order to move more towards the right.

Change speed: Changing the speed changes the duty cycle of the waves, and thus speed at which motor drives the tyres. Whenever we change speed on app, a single character from 0-10 is sent, and that is then scaled on a scale of 0-255 in order to set duty cycle e.g for speed 1, duty cycle of wave will be 25.

Other commands: In addition to direction and speed, commands to turn on/off front lights, rear light and horn are also implemented. After receiving command form Bluetooth module, microcontroller sends either high or low voltage to the specified output, e.g. high for turning on lights.

so this is all about Bluetooth controlled robot using pic microcontroller. I have explained each and every step and each component you need to design this robot. I believe if you have basic knowledge of programming you can write your own code for this project. If you need code, contact me at [email protected]