This is a first important part of electronics lab components. While most of the circuits you come across in your everyday life are in  the form of Printed Circuit Boards (PCBs), every circuit starts off as an implementation on a breadboard. A breadboard is a prototyping board made of insulated material with a perforated top in which wires and components can be inserted. The perforations in the board are connected in a special manner through internal wiring at the bottom of the board. The fact that wires and components are inserted, and not soldered, means they can be easily removed, replaced or have their interconnections altered easily. In contrast, to make changes on a PCB, a new PCB needs to be designed which incurs costs in terms   of both time and resources. Therefore, breadboards are ideal for testing and lab work since, in both cases, circuits undergo a lot of changes. Figure 1 shows the layout of a basic breadboard. In order to allow for large circuits to be made, as is the case with some of the later labs, two such breadboards are sometimes placed side by side on trainer boards. 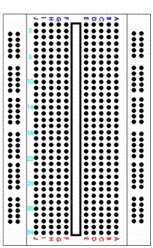 Figure 2a shows the manner in which the inner perforations are connected. Each row of 5 holes is “shorted”, that is, each hole in a row is connected to each other through an internal wire. The large rectangle in the center represents a grove. It should be noted here that holes on one side of the grove are not connected to the holes on the other side. Figure 2b shows the connections of the outer perforations. The holes are shorted column wise with no connections between the adjacent columns. Also, while the number of perforations in a column may vary with the length of the breadboard, there is always a break in connection at the half way point in a column as shown in the figure. This means that each column is essentially split into two smaller columns. 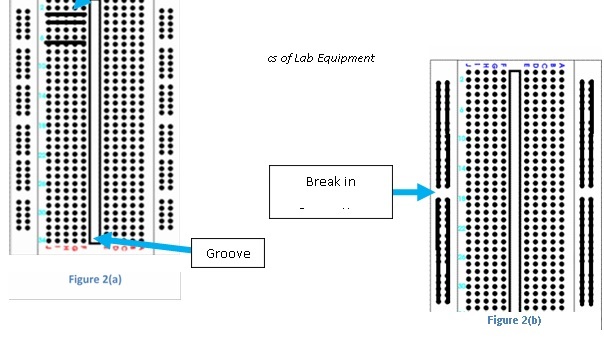 In electronics lab components, the components that you will be dealing with mostly are Integrated Circuits (ICs). There are several different types of ICs, each with its unique functionality. Figure 3 shows the structure of a typical IC chip package (called IC for convenience).  Every IC has a grove at the top which  is used to determine its orientation. Figure 4 shows the manner in which an IC is placed on the breadboard. It is recommended to ensure that the groove on the IC is pointing towards the left as illustrated in the figure. ICs are active elements. This means that they require to be “powered up” before   they   can   be   used.   Therefore,   every   IC,   no   matter   what its 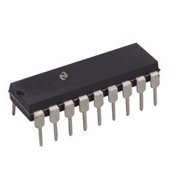 functionality, will always have two special pins labeled Vcc and Ground (or Gnd). Ground is to be connected  to  the  Gnd  supply  of  the  trainer  board while Vcc is to be connected to the 5V supply. Ignore the 12V and the -12V supplies on the board.It should be noted here that voltage is a relative quantity. The voltage at any point can only be expressed as the amount of difference between that point   and   the  voltage   at   a   reference  point. The 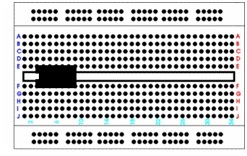 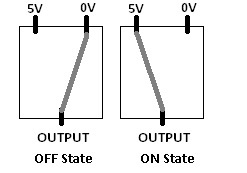 These switches have a single output, which follows the normal convention as stated above.

When a normal switch is “thrown”, that is its state is changed, the resulting output voltage does not immediately go to and stay at the new value. Rather, it oscillates between 5V and 0V for a short period before settling at desired output. In sensitive circuits, this will lead to the circuit producing incorrect results. A debouncing switch employs a circuit to remove these oscillations and produce a clean transition when the switch is thrown.

The outputs of logic circuits, like the inputs, are composed of ON/OFF signals. They can be verified by using  the  LEDs available  on  the  trainer  boards.  LED  stands  for Light  Emitting Diode;  a  two terminal device only conducts in one direction, as is the case with a typical diode. They convert electrical energy into light energy. The conversion results in a drop in voltage across the terminals of the LED, which is typically around 2V. LEDs offer a big advantage over traditional bulbs in that they consume negligible amount of power. The disadvantage of LEDs is their inability to withstand high voltages or currents. Therefore, when using an LED, always connect a resistor (100-200Ω) in series with it.

The trainer board provides a square wave that oscillates between a minima of 0V and a maxima of 5V. This is called a clock. The clock is used to drive “sequential” logic devices, which you will come across in the later labs. Essentially, this clock is used for the same purpose as the clock in you computers. The trainer board provides the option of varying the frequency of   this clock, but the amplitude is fixed. 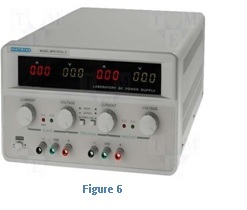 To generate negative voltages, the positive terminal is shorted with the ground of the circuit and voltage is obtained from the negative terminal. The display will always indicate a positive value but the actual sign of the output voltage depends on the manner in which the terminals are connected. Note that, in using multiple voltage outputs from a single supply or from multiple power supplies, all the terminals taken to be at 0V should be shorted together.

Voltage can be varied on the variable outputs of the supply by rotating the respective voltage knobs. Apart from the voltage knob, there is one for current as well. The purpose of this knob is not to generate current as current depends entirely on the voltage being supplied and the power being drawn by the circuit. This knob is used to limit current, that is, it controls the maximum amount of current that can flow from the output block. If current being drawn from the supply tries to increase beyond the limit,  the red indicator LED turns on and the voltage being supplied drops even though the voltage knob is still in the same position. Since logic circuits draw a very small amount of current, it is a good idea to keep the limit to a small value.

The multimeter (Figure 7), as suggested by its name, is used to measure multiple parameters in a circuit. It can be used to measure voltage, current, resistance, capacitance and it  even has a mode for checking for short circuits. In logic circuits, you will typically be using only the voltage and the short circuit mode.

The voltage mode is accessed by pressing the button marked

“V”. Similar to the principle of generation, voltages are measured as the voltage at the red probe with respect to the black probe. The probes are connected to the multimeter as shown in Figure 8. In most cases, the black probe is shorted with the ground of the circuit. However, for cases such as measuring the potential drop across a resistor, the probes may be placed at the terminals of the resistor while it is inside the breadboard. The value of potential drop being displayed may either be positive or negative and this can be used to determine the direction in which current  is  flowing in the resistor.

The short circuit mode is accessed by pressing the three buttons marked in Figure 9. All three buttons should be in a pushed in state. In this mode, the two probes can be used to check if a short circuit exists between two points in a circuit. The mode works  by  checking  if  a  closed  loop  is  formed  between the probes. A closed loop is a path in a circuit is one in which current can flow. This means that if two points are shorted together, current will flow between them. If there are not connected, then there is no  closed path for the current to travel (open loop) and hence no current will flow.

The oscilloscope (Figure 10) is one of the most interesting pieces of equipment that you will be using in the lab. Although it can only be used to measure voltages, it allows for a large amount of functions to be performed on the acquired data. It  is particularly helpful in measuring voltages that change with time as it is able to not only plot the wave form but also automatically measure many parameters associated with the wave. The probes of an oscilloscope are similar to the one shown in Figure 11. The small black clip is connected to the ground of the circuit whereas the larger grey part of the probe is connected to the point whose voltage needs to be  measured.

In  electronic lab, the DMM is used to measure voltage whereas the oscilloscope is used to observe signal wave forms.

The function generator (Figure 12) is used to produce wave forms of variable frequency, amplitude and offset. The generators in the lab are capable of producing sine waves, triangle/saw-tooth waves and square waves. The principle of voltage generation is again similar to the power supply in which the negative (black) clip is connected to the ground and the voltage at the positive (red) clip oscillates with respect  to  it.  While  you  may  be  familiar  with  the  terms frequency and amplitude, offset is a relatively new yet equally important quantity. 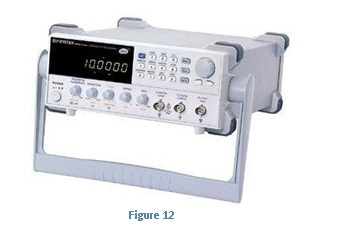