In the last tutorial, we have seen introduction to IoT. In this tutorial, I will talk about IoT protocols and their types.  If we look closely at the term “Internet of Things”, it has two main words, Things and the Internet. Firstly, for the term “Internet” the first thing that comes up in our mind is a network that is used for global communication and thus enabling information sharing across the globe turning this planet into a global village. On the other hand,  the other word “Things” we can refer to numerous IoT (internet of things) devices which are capable of performing actuating, remote sensing and live to monitor of different types of data. Additionally,  all these IoT devices have unique identities so that they can be accessed over thousands of devices for the purpose of communication or any other.

A huge number of connected devices making the Internet of things (IoT) are expanding continuously over the globe. Now a number of devices around us are capable to process, collect and send data over servers or other connected devices. These devices are also used in many other ways like manufacturing, automotive, medicine, security system and much more. Therefore, let’s talk about IoT protocols and types of IoT protocols

The IoT system can perform and transfer information only when they are in online mode. For example,  when devices in IoT are safely connected to communication networks. Here the question arises that how much connection is possible and what sort of connections are available for making these thousands of devices to communicate with each other. The answer to these entire questions is PROTOCOL. We can say that protocols enable these devices to communicate with each other and many protocols have been introduced so far and continuously many protocols are being introduced. Therefore,  in this article are to going to discuss IoT network requirements, different types of protocols used in IoT. In the end, we provide a brief description of commonly used protocols in the Internet of Things.

Some mandatory requirements to build an IoT network are listed below:

Although, there exist a large number of IoT protocols are used in IoT. but here we will be discussing some widely used protocols in the Internet of Things which are listed below:

So let’s discuss these protocols in detail.

The first IOT protocol we are going to explain is MQTT (message queue telemetry transport). It is a lightweight protocol and used for sending data from sensors to middleware and applications. Additionallty, it works on top of TCP / IP in order for providing reliable delivery of data. Furthermore, it  has three main components

Hence,  the basic workflow of this protocol is that the publisher is responsible for generating and transmission of information to subscribers through a broker. The main function of a broker is to ensure security by checking authorization of subscribers and publishers. This protocol is preferred for IoT devices because it provides well-organized information routing function to cheap, small, low memory and power devices and also low bandwidth networks.

DDS stands for data distribution service. In IoT it is used for scalable, real-time and for machine – machine high performance. This protocol can be used in devices as well as in cloud. Mainly,  it consists of two main layers:

AMQP stands for advance message queuing protocol. If we consider OSI model of internet architecture then this protocol is used at application layer. The processing of this protocol consists of three main components following some set of rules.

It is also a very famous IOT protocol. Furthermore, it is commonly used short range communication technology and is used mostly in mobile devices and smart phones. Furthermore, it is mostly used in personal products. This technology is real foundation for IoT and was designed in order to minimize power consumption. It is flexible and scalable to almost all market inventions. A new important protocol to use in IoT is Bluetooth Smart or BLE (Bluetooth low energy). At last, Some important points related to this protocol

Another protocol we are going to discuss is Zigbee 3.0. The universal language for IoT was created by Zigbee alliance known as Dotdot. This language enabled smart devices to work seamlessly and securely on any type of network by understanding each other. Zigbee 3.0 has following features

In LAN environments, the most used type of connectivity is Wi-Fi. It is the technology that is used in radio wireless networking of devices. Below are some features of this protocol

The base of every mobile phone network is cellular technology. It is also used in Internet of Things applications which are designed to perform over large distance. These applications take benefit from the cellular communication technology such as 2 G, 3 G, 4 G and now 5G is going to launch soon. Some features of this protocol are given below:

Long range wide area network (LoRaWAN) is a protocol which is used for wide area networks. It is designed in such a way that it supports a huge amount of networks having millions of low power devices. Some features of this protocol are listed below:

SOME OTHER IOT PROTOCOLS

Although above-metioned protocols are mostly used and famous. But these are also available.

In summary, this table provides a comparison of all protocols according to various aspects. 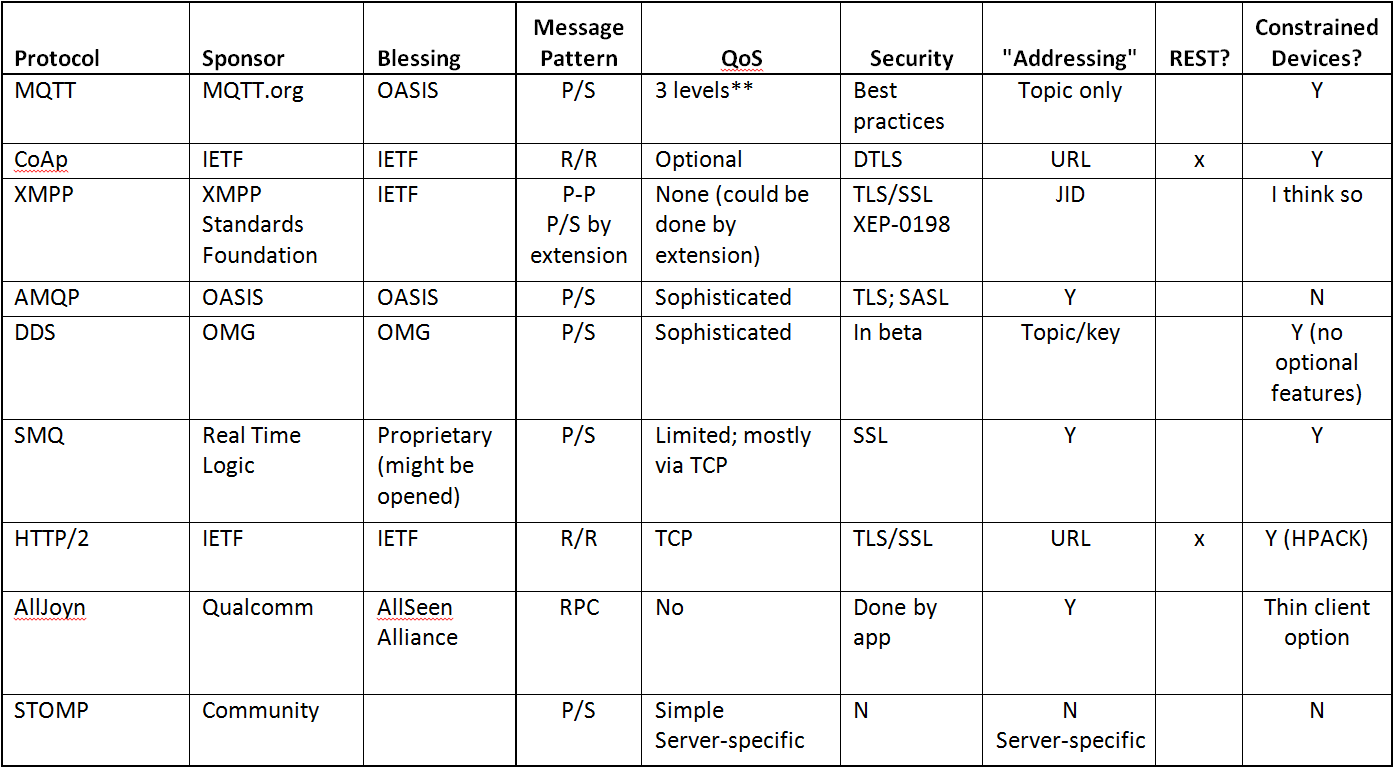