Multilevel inverters types applications, advantages and disadvantages all things have been explained in this article. In order to have a clear understanding of Multi-level inverters, one should have an explicit idea about inverters and its purpose in power electronics.

Power Electronics: The branch of electronics that deals with conversion and control of Electric power is called power electronics. Many of our appliances are designed to work with AC, but a power generator normally generates DC. So, if we want to run something like an AC-powered gadget from a DC car battery in a mobile home, we need a device that will convert DC to AC. Here comes the concept of Inverters.

Inverters: The device which converts DC voltage to AC voltage is called inverter. Output voltage should ideally be sinusoidal wave of variable magnitude and variable frequency. An inverter does the opposite job of Rectifier. Electronic inverters can be used to produce smoothly varying AC output from a DC input. Inverters are made up of capacitors and inductors which make the output current smooth as compared to switching square wave output you get with a basic inverter. Different types of inverters and their complete design can be checked by visiting following links

A best example to understand the use for inverters is in emergency power supplies, also called uninterruptible power supplies (UPS). In a typical UPS, when power is flowing normally, the batteries are charged by DC, which is produced from the AC power supply using a transformer and rectifier circuit. If the power fails, the batteries provide DC through an inverter in order to produce AC. 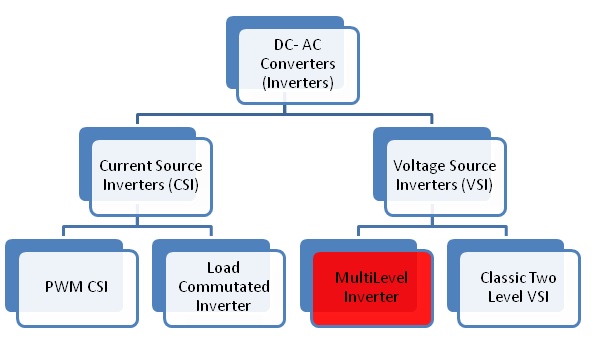 The need of multilevel converter is to give a high output power from medium voltage source. The multi level inverter consists of several switches.

The most common type of inverter which is used to generate AC voltage from DC Voltage is two level inverter. A two-level Inverter creates two different voltages for the load i.e. suppose we are providing V as an input to a two level inverter then it will provide + V/2 and – V/2 on output. In order to build an AC voltage, these two newly generated voltages are usually switched. 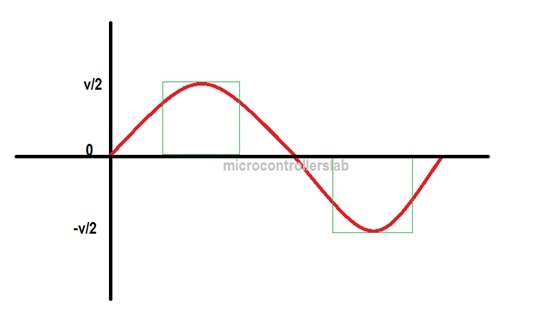 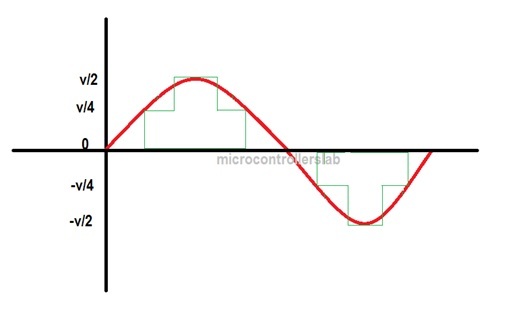 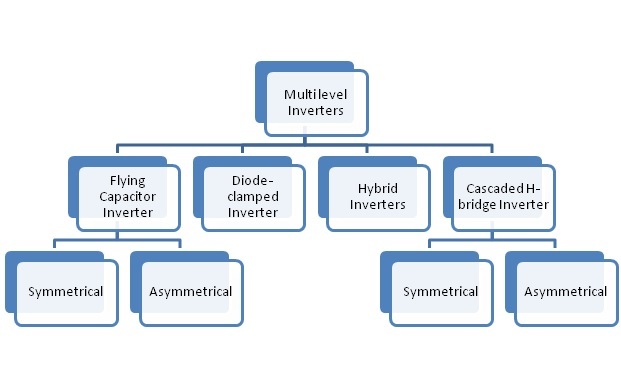 This type of inverter uses diodes and gives different voltage levels to the capacitor banks connected in series. The benefit of using diode is to reduce stress on other electrical devices because it gives a limited amount of voltage. But there is a drawback of this topology that the maximum voltage which we can get from it cannot be more than half of input voltage (DC voltage). But this problem can be solved by increasing the number of capacitors, switches and diodes. This type of inverters provides the high efficiency and it is a simple method of the back to back power transfer systems.Example: 5- Level diode clamped multilevel inverter, 9- level diode clamped multilevel inverter. 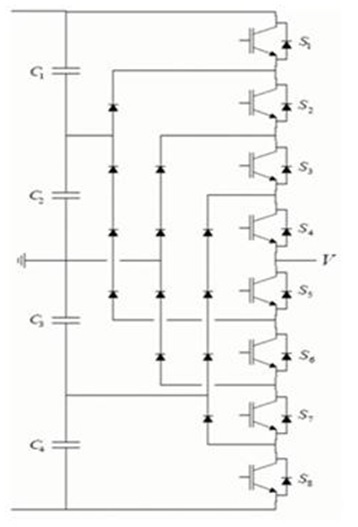 The main idea of this topology is the use of capacitors. The capacitors transfer the limited amount of voltage to electrical devices. In this inverter switching states are like in the diode clamped inverter. Clamping diodes are not required in this type of inverters. Likewise, the maximum voltage which we can get from it cannot be more than half of input voltage (DC voltage). It can control both the active and reactive power flow. But due to the high frequency switching, switching losses will takes place.Example: 5-level flying capacitors multilevel inverter, 9-level flying capacitors multilevel inverter. 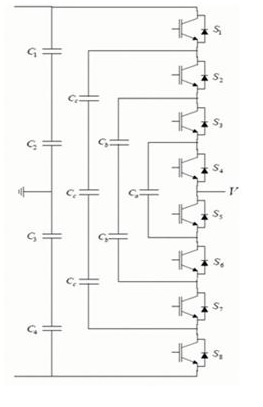 The Cascaded H-bridge multilevel inverter uses capacitor and switches.  It requires less number of components in each level as compared to previous described types. This topology consists of series of power conversion cells and power can be easily scaled.The combination of capacitors and switches pair is called an H-bridge.It consists of H-bride cells and each cell can provide three different voltages like zero, positive DC and negative DC voltages.Example: 5-H-Bridge, 9-H-Bridge Multilevel inverter 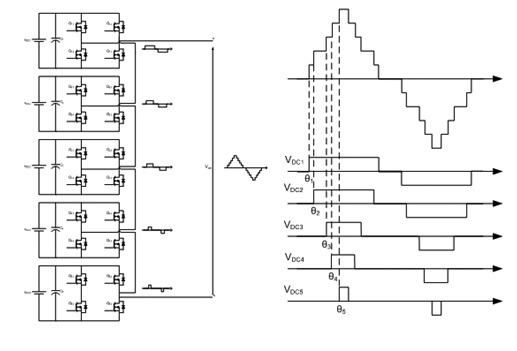 ·         Efficiency is high at fundamental frequency,

·         Number of clamping diodes increases with the increase of each level.

·         Dc level will discharge when control and monitoring are not precise

·         Voltage control is difficult for all the capacitors

·         Due to large number of sources, Applications are Limited.