Photodiode is basically a light detector semiconductor device, which converts the light energy into current or voltage depends upon the mode of operation. It has built in optical filter, lenses and may have a large or small area of surface, when light falls on this surface, then this produce a current.when there is no any light falls on this surface then it also gives a small amount of current. The current, which produce this device is directly proportional to the light falls on the surface of the photodiode but as we increase the surface area then it response time to produce current becomes low. The schematic symbol is shown in figure below: 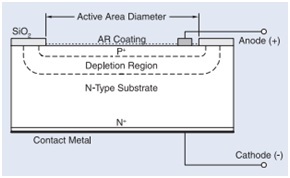 According to the figure above it is formed by the diffusion of lightly doped p type impurity into the heavily doped n type impurity and the area between the p type impurity and n type impurity is called depletion region. The contact pads are deployed at n type area called cathode and p type area called anode. In this figure some portion of the front area is called active area which is coated with anti-refection material to reduce the reflection of light and rest of the area is called non-active area which is coated with thick layer of silicon dioxide(Sio2). The responsivity and speed of photodiode to convert the light into current can controlled by the controlling the thickness area of this non-active area. The photo diode is operated in reverse bias mode means negative voltage is applied at anode and positive voltage is applied at cathode

Photodiode is made of silicon semiconductor material which heave the energy gap 1.12 eV at room temperature. This gap is actually between valance band and conduction band and at zero room temperature, the valance band is completely filled with the negative or positive ions, similarly, the conduction band is completely vacant means there is no any negative or positive ions. As we increase the temperature, the electrons in valance band become excited and move from valance band to conduction and these electrons are called free electron. These free electrons are free to conduct the current. When the p type and n type material formed a junction then a concentration gradient becomes. Due to this concentration gradient, the diffusion of holes from p type material region and electron from n type material region develop a voltage across the junction and due to this inter diffusion depletion region is also formed. The voltage across this depletion region produced electric field. When we connect the photodiode in reverse bias mode then the width of this depletion region is increased slowly, eventually this region has breakdown and flow of current start from anode to cathode. This current depends upon the incident of light at the surface.

The photodiode operates in mode of operation.

Photovoltaic Mode: This mode is also known as zero bias mode and this mode is preferred in that applications, where we are using this photodiode at low level frequency as well as ultra-low level light. This mode provides very low level current variation and nonlinear behavior in voltage production.

Avalanche Diode Mode:This mode is used in high reverse biased condition and photodiode works in avalanche breakdown region. In this mode the internal gain and responsivity of the device has increased.

Mainly, the photodiode is divided into four types.

PN Junction Photodiode: It is the first and simple form it that had been used at the beginning, after this so many technologies have developed but currently this type of diode is not mostly used. It is only used at low frequency and for low sensitive application.

Avalanche Photodiode: This type photodiode is used in that areas, where the light has low intensity. The avalanche photodiode provides high level of gain but it also produces high level of noise, therefore, this type  is not applicable for all applications.

PIN Photodiode:This is actually p-i-n junction photodiode, although, this is not a first form but currently this type is widely used in so many applications. This PIN junction  collects the photons of light more efficiently than the pn junction photodiode. This type of photodiode also offers the lower capacitance than the other types.

Schottky Photodiode: We can analyze, with the name of this type of photodiode, that, it belongs to schottky diode which is used for high frequency switching. This type of diode has high speed capability. It offers lower capacitance and high bandwidth of communication system.