Servo motor is revolving or linear motion actuator, that allows the precisely control of its linear velocity, acceleration or angular position. This motor is available in market with coupled sensor for feedback control. This motor is control with sophisticated controller or a special kind of module is designed for controlling this motion. Servo motor is not a special class of motor, actually the servo word is used for that motors, which is used for control loop system. Servo motor is usually interfaced with microcontroller for control applications.  A simple servo motor with feedback sensor is shown in figure 1 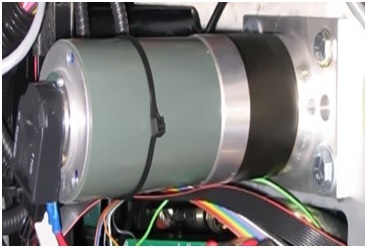 Servo motor is Dc motor which consist of following parts 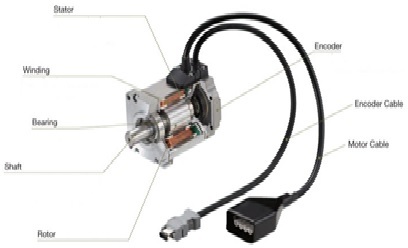 Servo motors is actually the dc motor and all dc motors work on the principle of Fleming s left hand rule. This rule is used for determining the direction of force which act on the DC motor armature conductor. This rule tells us if we extend our left hand,index finger, middle finger and thumb in such a way that shown in figure 3

With the experimental point of view, the servo motor is control with the controller or module here for understating the servo motor control we will the explain the control with an example. Consider a motor is rotate with an angle 45degree by a given signal then stop for some time and wait for the further instruction. The shaft of this motor is coupled to another shaft with a gear assembly for decreasing the high rpm in to the low rpm (revolution per minute) at the output side and that shaft is called output shaft shown in figure 4

Servo motor is one of the most special motor that can be used for precise angular movement. The main advantage of this motor is that if we are controlling this motor with microcontroller then there is no need any feedback controller or mechanism. This motor is mostly used in industrial and commercial application. Its working principle and operation is very simple. It consists of three wires, two wires are used for power on the motor and third is used of control signal. A servo motor is control through ATMEL 8051 Shown in figure 5