Wireless sensor networks are a group of specialized devices or sensors which are used to monitor different environmental conditions and to collect and organize that data at some certain central location. It detects and measures a number of physical conditions such as humidity, temperature, sound, pressure, speed and direction, chemical concentrations, vibrations, pollutant levels and many other such conditions. It has many application with microcontroller projects. 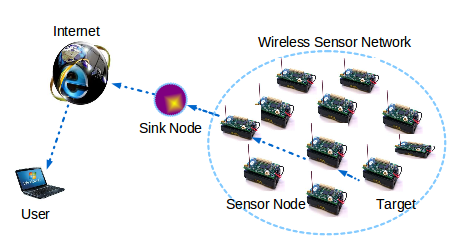 There are a number of nodes in a sensor network, these nodes are the detection stations and they are very small and portable. There is a sensor/transducer, microcontroller, transceiver and power source in every sensor node.  The transducer senses the physical condition and if there is any change then it generates electrical signals. These signals go to the microcomputer for processing. A central computer sends commands to the transceiver and data is then transmitted to that computer.

We will discuss each of them briefly.

In this topology, there is no central hub. A node can communicate directly to another node. This is the most common topology and it has a single data communication channel which offers a secure communication path. Each device can act as a client and a server in it. 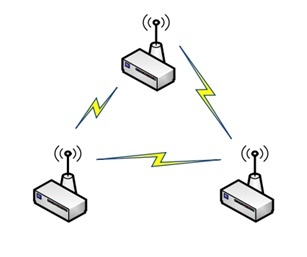 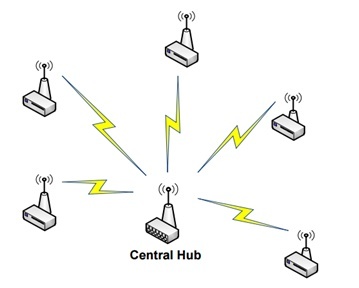 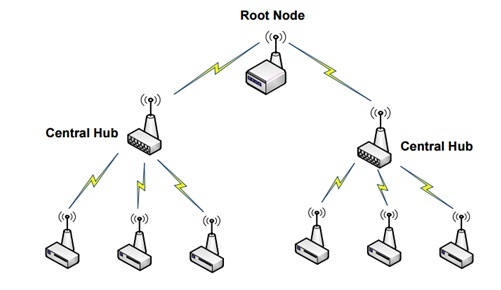 In the mesh network, the data can ‘hop’ from one node to another. All the nodes can communicate with each other directly without having to depend on a central communication hub. This is the most reliable structure of network communication because there is no single point of failure in it. But this structure is very complex and requires a lot of power consumption. 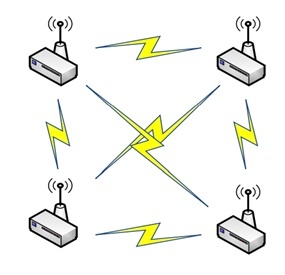 There are different types of sensor networks such as underground, underwater, terrestrial and multimedia WSNs etc. We will discuss them briefly.

As these are the ‘terrestrial’ sensor networks therefore they are above ground and solar cells can be used to power up these networks. The energy can be conserved by minimizing delays and by using operations of low duty cycles etc.

These sensor networks are more costly as compared to terrestrial networks. The equipments used are expensive and proper maintenance is needed. These are effectively used to monitor the underground conditions therefore their whole network is underground but to pass on the information to the base station, sink nodes are used which are present above the ground. 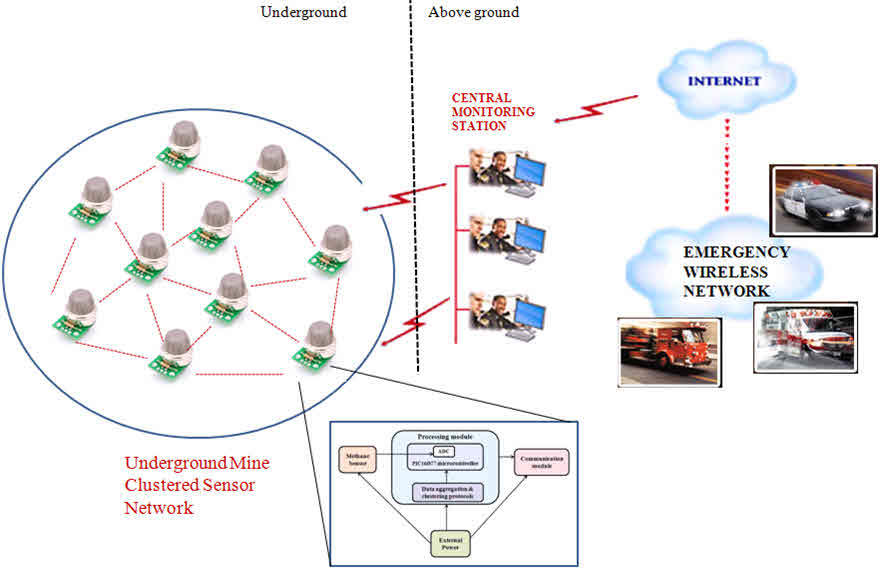 Problems are faced while recharging the batteries of the underground sensor networks and loss of signal can also occur due to high level of attenuation in the underground environment.

Underwater wireless sensor network system comprises of sensor nodes and vehicles which are deployed under the water. To gather data from the sensor nodes, underwater vehicles are to be used. The long propagation delay and sensor failures are a big challenge to the underwater communication system. The battery of these WSNs is also limited and cannot be recharged; therefore, different techniques are being developed to solve this issue of energy usage and conservation.

These sensor networks can gather information in the form of audio, video and imaging. The sensor nodes in these networks are connected with cameras and microphones. They can track and monitor different events occurring and can keep a visual display of the events also. For the purpose of data compression, retrieval and correlation, these nodes are also interconnected with one another through a wireless connection. 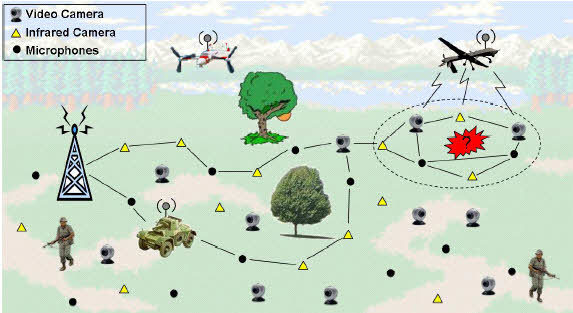 As audio and visual data can also be transmitted through these networks therefore they require high consumption of power and high bandwidth. Advanced techniques of data processing and compression are used in it.

The mobile network, as the name suggests, is not fixed rather the sensor nodes can move from one place to any other. They can be easily interfaced with the environment around them. Their main advantage is that they provide better coverage, superior channel capacity and enhanced coverage. These mobile WSNs are more versatile as compared to the other static sensor network systems.

If an area is reported to have been stricken from some sort of calamity such as wildfire, then drop the sensor nodes on the fire from an aircraft. Monitor the data of each node and construct a temperature map to devise proper ways and techniques to overcome the fire.

As the WSNs can be deployed rapidly and are self organized therefore they are very useful in military operations for sensing and monitoring friendly or hostile motions. The battlefield surveillance can be done through the sensor nodes to keep a check on everything in case more equipment, forces or ammunitions are needed in the battlefield. The chemical, nuclear and biological attacks can also be detected through the sensor nodes. 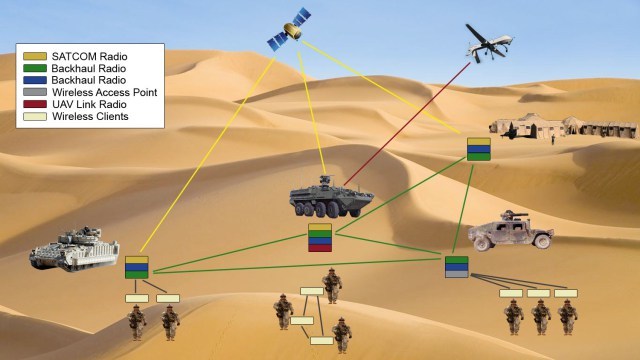 An example of this is the ‘sniper detection system’ which can detect the incoming fire through acoustic sensors and the position of the shooter can also be estimated by processing the detected audio from the microphone.

These sensor networks have a huge number of applications in the environment. They can be used to track movement of animals, birds and record them. Monitoring of earth, soil, atmosphere context, irrigation and precision agriculture can be done through these sensors. They can also used for the detection of fire, flood, earthquakes, and chemical/biological outbreak etc. 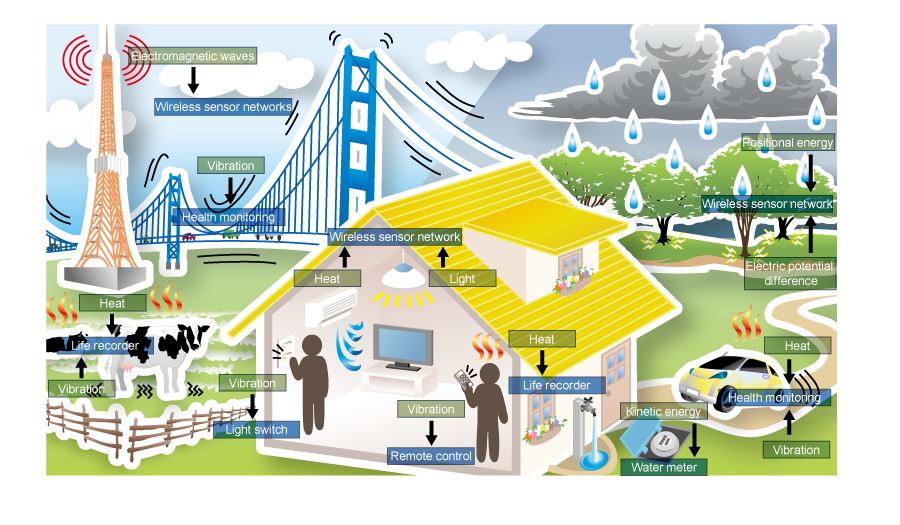 A common example is of ‘Zebra Net’. The purpose of this system is to track and monitor the movements and interactions of zebras within themselves and with other species also.

In health applications, the integrated monitoring of a patient can be done by using WSNs. The internal processes and movements of animals can be monitored. Diagnostics can be done. They also help in keeping a check on drug administration in hospitals and in monitoring patients as well as doctors.

An example of this is ‘artificial retina’ which helps the patient in detecting the presence of light and the movement of objects. They can also locate objects and count individual items.

As the technology is advancing, it is also making its way in our household appliances for their smooth running and satisfactory performance. These sensors can be found in refrigerators, microwave ovens, vacuum cleaners, security systems and also in water monitoring systems. The user can control devices locally as well as remotely with the help of the WSNs.