DC to DC Buck Converter simulation with MATLAB Simulink Model: Dc to dc buck converter is a converter in which dc voltages are step down to desired level by high frequency switching of semiconductor switches such as MOSFET or IGBTs. This type of converter is also called step down converter. If we talk about regulated supply then it is not so much difficult in ac side but in dc side it is so much difficult and this is only possible with high frequency switching of semiconductor switches. This type of converter is mainly used in switch mode power supplies and dc motor control system. The schematic diagram of buck converter is shown in figure 1 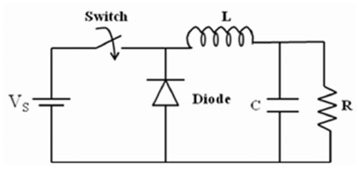 In this MATLAB Simulink model, an ideal switch is used for regulating the 20V dc voltages in to 10V dc. The ideal switch is on or off through pulse generator which gives the 20V amplitude switching pulse of 20KHz frequency at 50% duty ratio which is gained by the duty ratio formula. The output of this converter is not pure dc it contains the high frequency harmonic content which are removed through low pass filter. In this model 1mH inductor and 10μF capacitor has been used such as low pass filter.10-ohm resistor has been used such as an output load. When this model is simulated in MATLAB then we can see that it shows 9.562 output voltage and .8292 inductor current. Which are showed in below simulation results.

Inductor current, output voltage and switching pulse of dc to dc buck converter is shown below in figure 3, 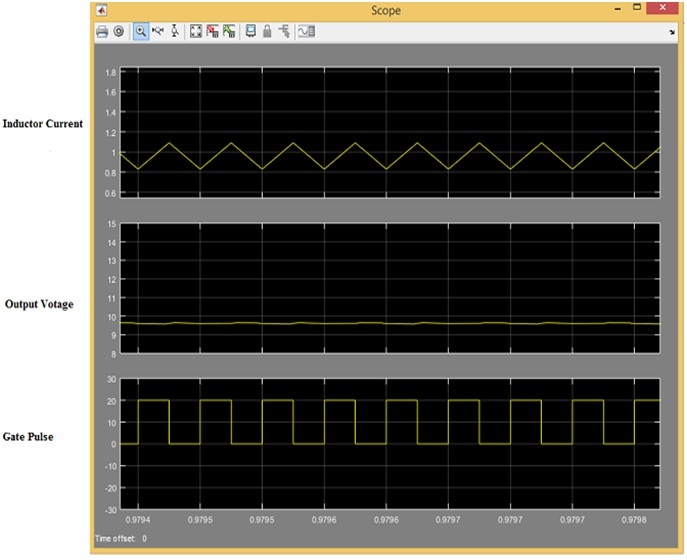 Every dc to dc converter works in two modes of operation, one is CCM (continuous conduction mode), in this mode inductor current never goes to zero and second one is DCM (discontinuous conduction mode), in this mode inductor current goes to zero at every switching pulse. Here we can see that in figure 3 this dc to dc buck converter works in CCM mode because inductor current never goes to zero. When switching pulse is positive then inductor is charged at its peak value during this, the output capacitor continuously provides the voltage to output load. Similarly, when switch pulse is negative then this inductor is discharged through diode and charge the capacitor. This process is continued at every switch pulse of dc to dc buck converter.

1 thought on “Dc to dc buck converter simulation with Simulink”